A Visit to the Survival Research Laboratories Workshop
By Ceci Moss

Over the summer, I met with Mark Pauline, director and founder of the legendary Survival Research Laboratories, who gave me a tour of his studio workshop in Petaluma, CA. Since its inception in 1978, SRL has quite literally blazed new territory in the field of performance, robotic engineering and sculpture, producing dangerous, overpowering live shows with custom robots built by Mark and his team. The performances provoke both a fear of and fascination with the power of technology, as well as the potential loss of human control over machines. Extremely affable and intelligent, with a no bullshit air about him, Mark’s technical knowledge was astounding. I’ve been following SRL’s work for years, so actually meeting Mark and seeing the robots up close was a real treat. 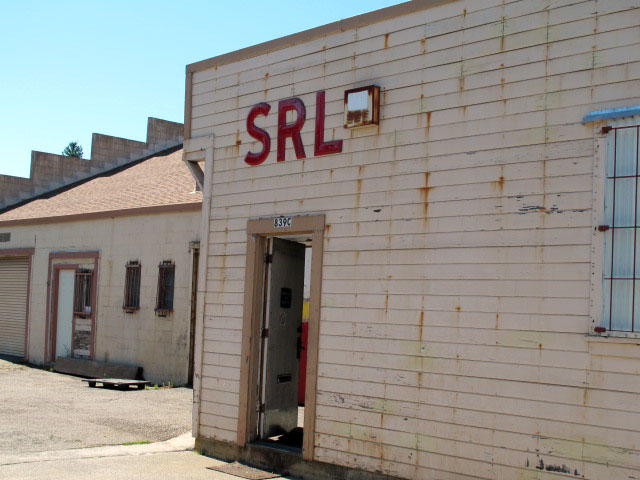 Survival Research Laboratories is currently operated out of three large garages in Petaluma, an idyllic, historic town about an hour north of San Francisco. Mark moved to the new location in 2007, lugging 180 tons of equipment with him, when the landlord of his old warehouse in San Francisco decided to hike up the rent after decades of affordability. The Petaluma spot seems perfectly suited to SRL’s activities, it even has a parking lot large enough to accommodate test runs of gigantic, menacing robots, and laidback neighbors who never complain about the noise.

The first garage I got a peek at is the laboratory, where the robots are made. When I visited, Mark was working on the head of a Spine Robot, pictured here. 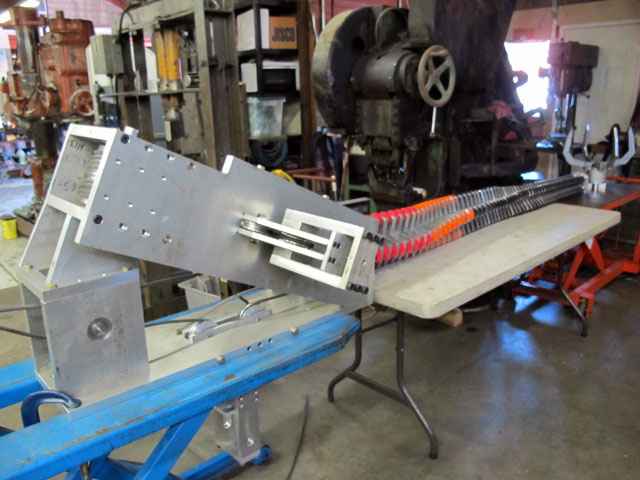 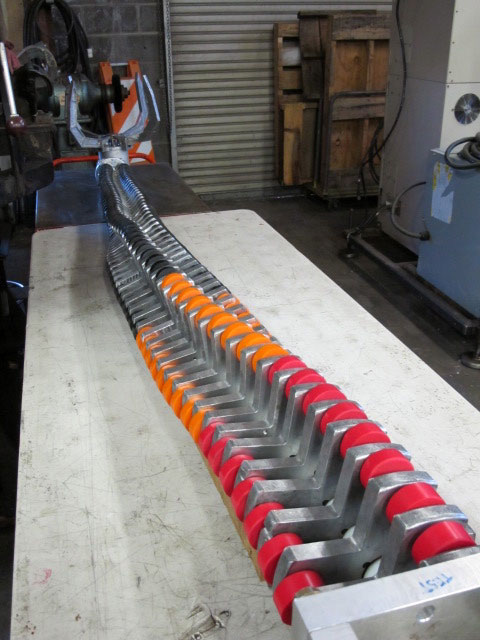 The Spine Robot uses an incredibly durable cable known as a dynemma rope, which was originally manufactured for military use, and can carry over 24,000 lbs of weight without stretching. The rope is fed through the elephant-like trunk of the robot, allowing it to endure the heavy weight. Variously-sized rubber cylinders line the trunk, which also helps distribute weight, absorb the shock, and provides more movement. A claw will be attached to the tip, shown below, which will pick up objects and swing them 50-75 feet, the farthest record for a pitching machine. 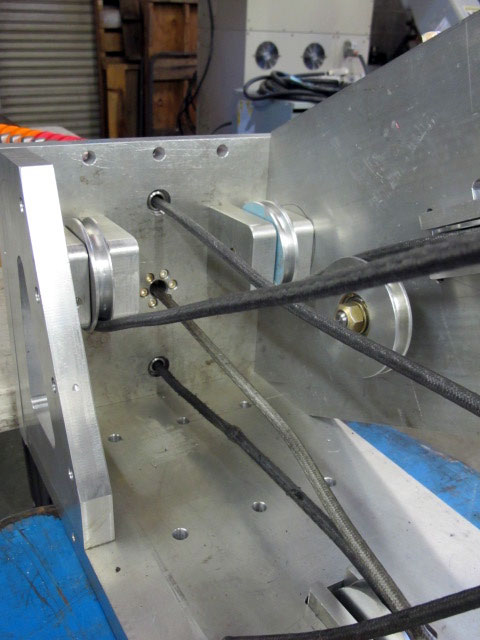 Close-up of the dynemma rope 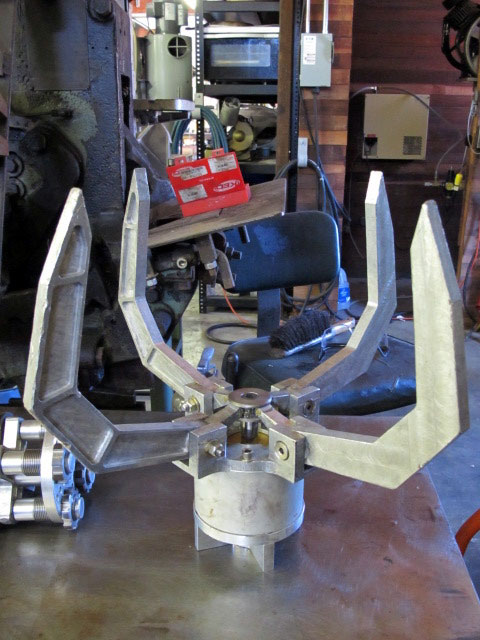 Claw of the Spine Robot

The laboratory contains a number of CNC machines, which help with the fabrication process, so Mark can design and cut parts in house. He uses 3D computer software for the design side of it. He also has a drill press, which is the only way to drill through the metal. 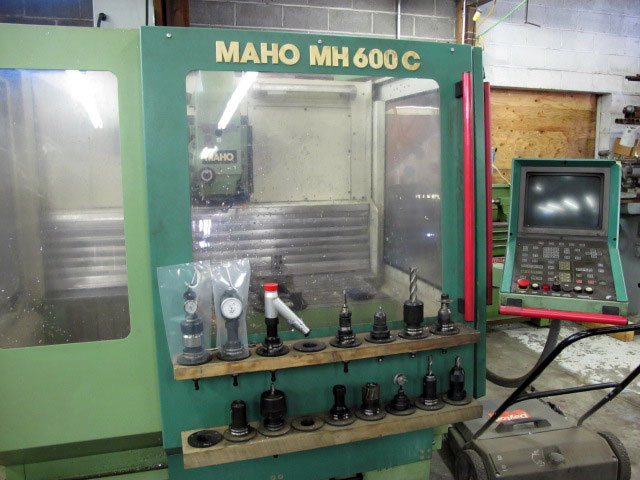 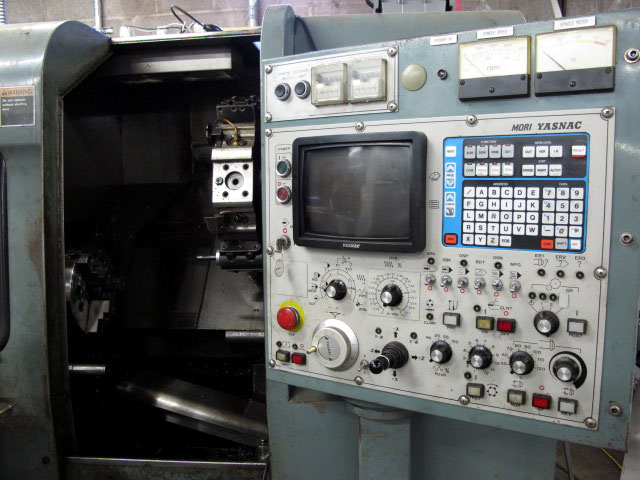 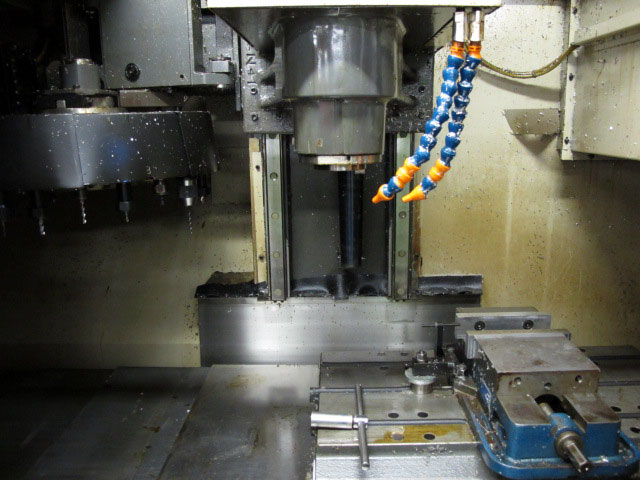 Inside of CNC Machine 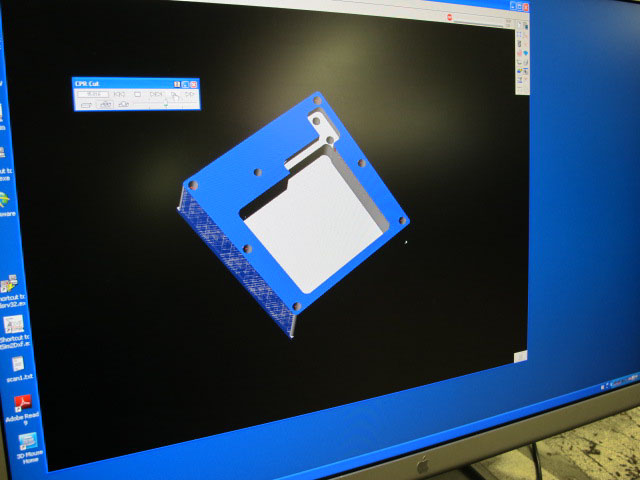 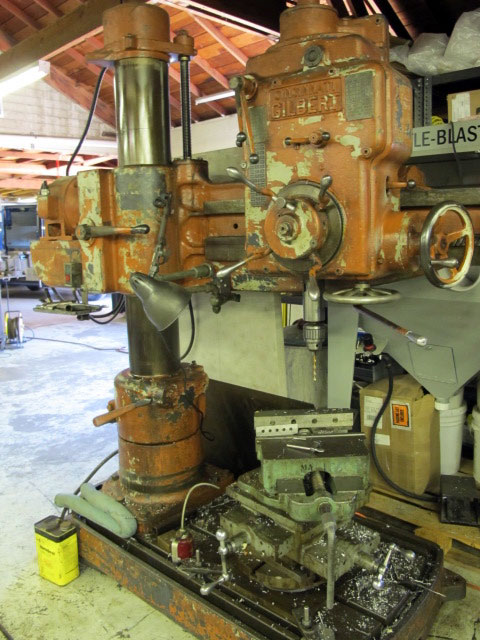 After browsing where the machines are made, I then got to look around the adjacent garage, where Mark keeps some of his more recent creations and runs his business. One way Mark has been able to support SRL after all these years is through his side job, where he buys and resells equipment from tech and medical research companies, mainly biotech firms. Using his expertise, he’s been able to verify the condition and salability of an enormous range of machines, even very obscure ones. He explained that he’s always learning new things about technology through this line of work, and even showed me a few machines that had just come in from a lab, one that sealed and timestamped specimens and another that made extremely precise measurements.

The second garage houses some of the “Greatest Hits” in SRL’s history. The Running Machine, whose monstrous legs are pictured below, is, according to the SRL site, the fastest leg-powered machine in the world. An arm at the front carries a knife or cutter, which it threateningly whips around while scurring on the field. 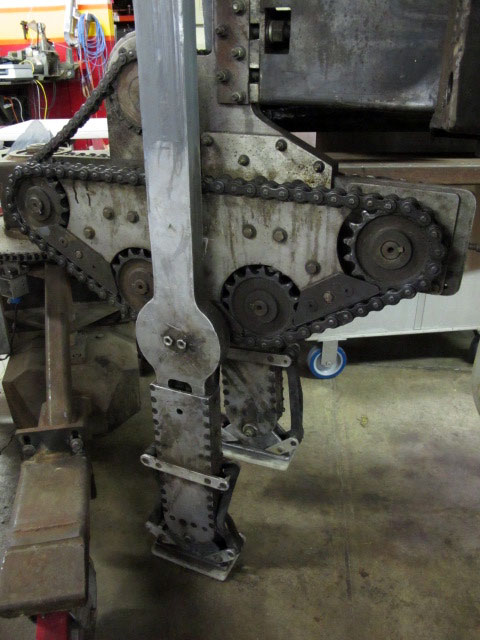 Here is the magnificent claw of the Shaker, which is repurposed from a logging machine. This robot grasps and spins objects 360-degrees. Mark likened its movement to a pitbull biting and shaking something with its jaw. 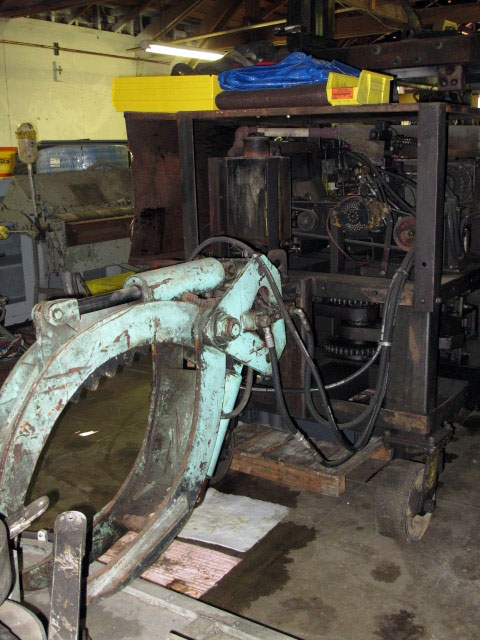 The Wheelcopter operates like a helicopter in principle, using a two dimensional collective pitch mechanism to propel its own motion. Large aircraft tires, which are shown here dismantled for storage, roll the unit around. 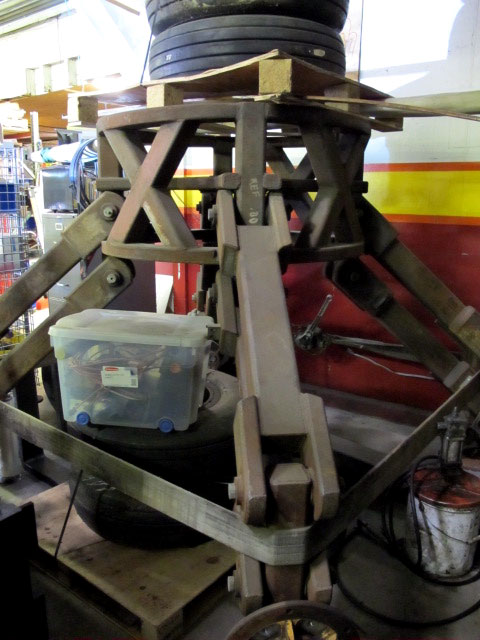 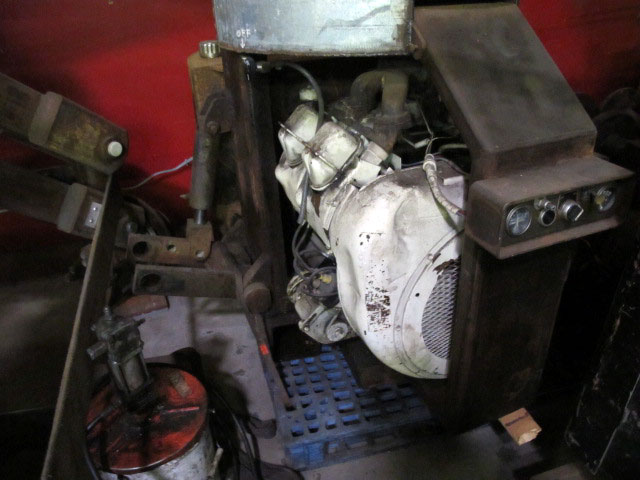 The face of Mr. Satan (below), a plastic mask that was used in many of their performances before it was 3D scanned into a machine and milled into a 300 lb block of steel. The steel has lots of nickel in it, so that it can withstand extremely high temperatures. When heated, Mr. Satan gives off a reddish/white glow, and is mounted to the front of a bomb loader, which sets things on fire. 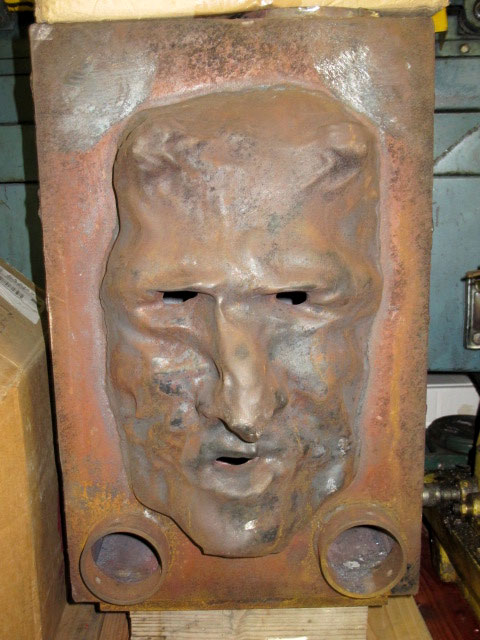 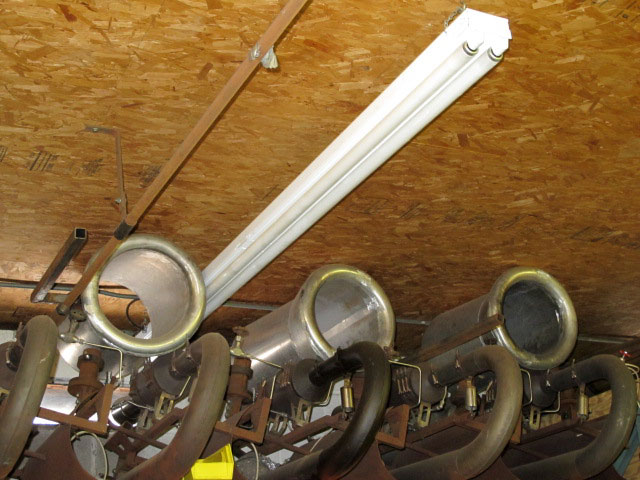 The last stop of my tour was the garage Mark termed his “Old Folks Home” for his most aged machines and various props from performances. While we sifted through his older work, he started talking about the 1980s, and mentioned a performance he did as part of a group show in New York in 1980 at an artspace called Area. Andy Warhol was in attendance, and after the show, he went up to Mark and introduced himself, saying “I really liked your show,” then pausing for a moment to add, “but it scared me.” 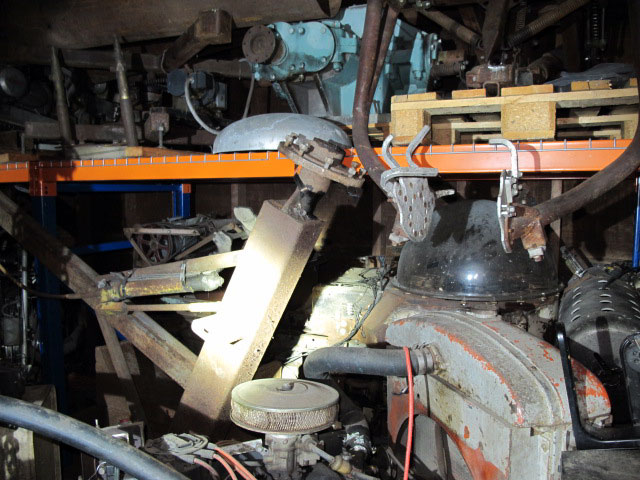 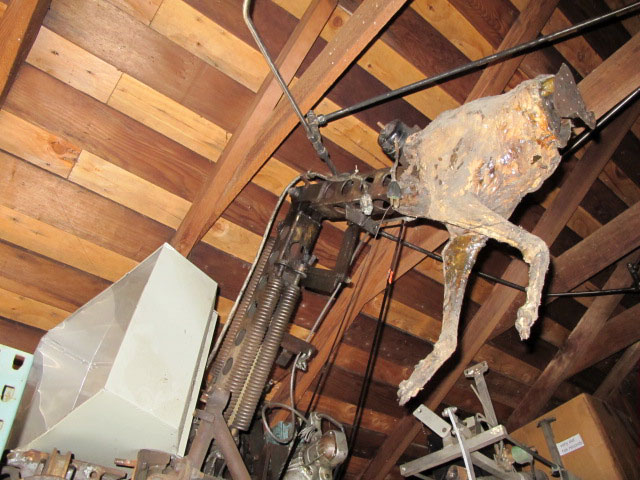 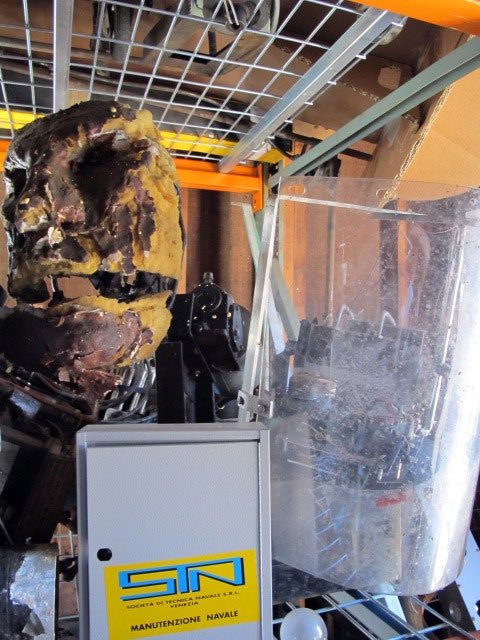 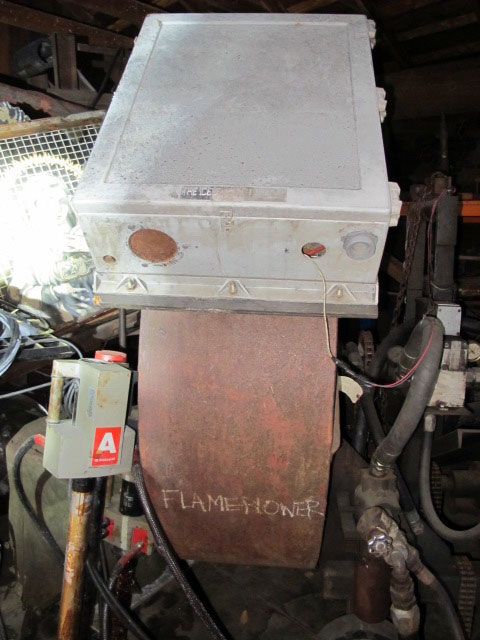 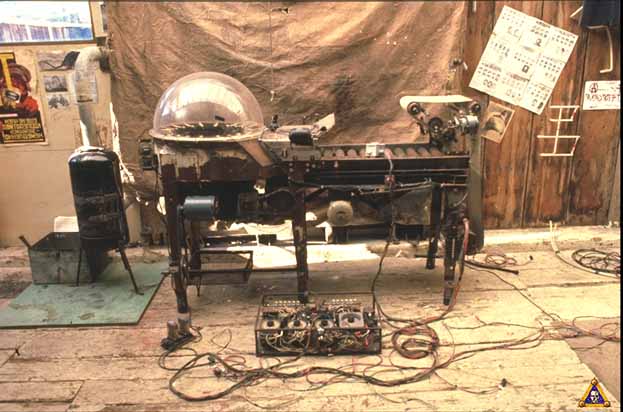 Archive photo of the De-Manufacturing Machine

Thanks to Mark for the visit!