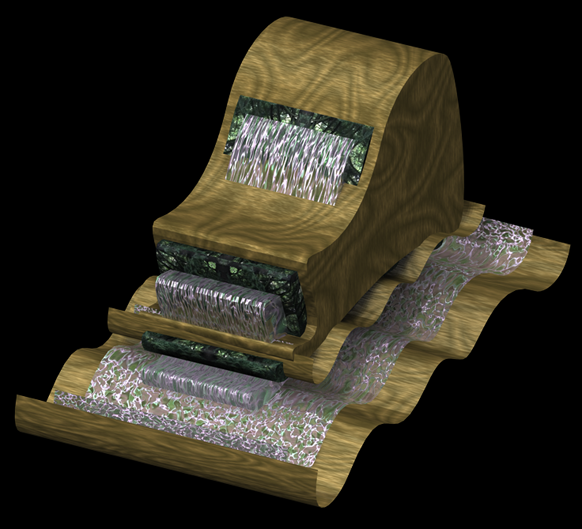 Your piece Enchanted Loom is described on your flickr as a self-portrait and shares an aesthetic that seems to be captured by many of your recent tableaux of being a sort of digital cabinet of curiosities, with an obsessive arrangement of openings and secret compartments. How do you see it functioning as a portrait?

I like to think of a lot of my work as portraiture in the sense that making a portrait means exploring the essence of an entity by representing it in an alternate form. I play with the idea that reality is a trippy entity that I can learn more about by making poetic models of it. I take long walks every day and try to focus completely on the textures of the sidewalks and plants and the arrangements and sequences of all the sensory elements that i encounter. Then I use my computer programs to craft textures and shapes that correspond with those observations. Obviously I approach the whole thing really playfully, which opens me up to recieving all kinds of wacky imagery through my inter-dimensional-entity-radar.

Your physical installations do an extraordinary job of capturing the feeling of your digital images - or perhaps vice versa? How do your installations and digital compositions inform one another, and is there anything you hope to find in one that is absent in the other?

Working in a variety of mediums is really important to me. My digital collages, physical installations, videos, websites, sounds and my collaborative performance projects are all completely intertwined. Each mode of working has a special structure to it that resonates my mind with its unique frequency. Regularly working in multiple mediums crosses those frequencies and expands the complexity of my mental framework! For instance, if I’m working on recording sound, my brain molds itself into a system that responds sensitively to temporal arrangements of pitches. If I then start to work on a digital collage, my method will be influenced by the structural residue that was carved into my brain by playing music. Most days, I am constantly shifting back and forth between mediums.

The most notable difference between working digitally and physically is the set of rules that guide each realm. In physical reality, your body is a totally present and anything that you make is in a direct relationship with the physicality of your body. It is so special and powerful to create physical realms and to move your body in harmony with those shapes as you make them and afterward. Working on the computer requires adherence to programs that were created by other humans. These programs allow for infinite creativity, but they still each exist as a very particular format and shape.

Working in a series of nested computer programs is a great work out for the brain! The process pulls my mind through a series of different shapes and rhythms, like a mental dance. If I’ve been really in the zone all day, then my dreams at night will be in the shape of the programs that I was using. A birds eye view on a room, zooming into different conversations, looping, slicing in half, reversing horizontally, rendering.

The incessant repetition and gridding of your online images make them feel somewhere between a secret code and a two-dimensional chant, and some of your imagery re-enforces this sense of digital mysticism. How do you decide when a repetition / composition is complete? What is brought forth when the spell is fully assembled?

Ooooh i like “two-dimensional chant”, what a great phrase! Yes, I think I work really musically with imagery. Organizing units into repetitive intuitive patterns is a totally blissful, trance-inducing activity for me. It feels so automatic, just emptying my mind and switching on a channel that is completely focused on balance. Making photoshop collages, arranging bricks and eggs on the floor, organizing video loops sequentially in time... I add and carve until the arrangement is balanced in a way that creates a perfectly cohesive vibrating ecosystem. 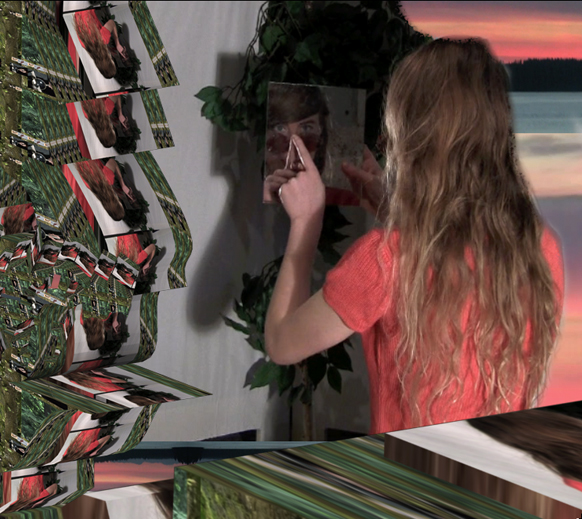 I started collecting images from the internet and using them in photoshop collages in my early teens. Blogging found images on livejournal was my first step toward using web pages as a template.

I always have a million programs open at once, running things in and out through all of them. I’ll upload a video to imovie, then import it to after effects and make it melty, then export a PNG sequence to photoshop and make some gifs, then arrange them in dreamweaver... then maybe take a screenshot of that and make it a texture for a 3d object in Blender, then animate that and put it back into after effects... etc. i love finding fluid relationships between all of the programs. endlessly playing and morphing. collecting media every step of the way, then throwing it up on the internet as images or videos, or moulding a conglomerate organism on my website. photoshop was in my blood, and the rest followed... i learned the basics of after effects in school and i’ve been getting a great blender education through internet tutorials.

I studied sculpture, painting and video at Pacific Northwest College of Art in Portland, Oregon.

Yes, my sculpture and performance work is heavily intertwined with my computer brain. Are you involved in other creative or social activities (i.e. music, writing, activism, community organizing)?I play music, build electronic instruments, and make sculpture installations with my art collectives Oregon Painting Society and MSHR.

I teach at a preschool and nanny sometimes. I’m sure that working with little kids has had a huge effect on me... it can be pretty psychedelic! Just communicating with little aliens about the basics of human existence...

passively soak it in as much as i can through google image searches of ancient temples and cuneiform tablets...

Lets play with everything we can get our hands on as manically as we can and see what happens!