Cole Stryker, Author of "Epic Win for Anonymous" on Interior Semiotics, Context Collapse, and "You Rage You Lose"
By Joanne McNeil 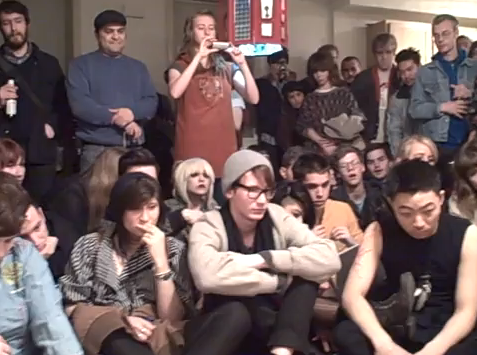 Last year, an anonymous Rhizome contributer interviewed Natacha Stolz regarding her performance Interior Semiotics, the video documentation of which eventually found its way on 4Chan:

What is it that made, and is still making, [4chan users] so angry about Stolz’s performance? The video contains graphic material, but in the age of Goatse, and Tubgirl, explicitness alone cannot shock or offend most people—especially internet trolls. Rather, it was the label on it—art—and the work’s perceived demographic—hipsters—that crawled under people’s skin. Many on the internet seem as angry with the audience—for sitting there, for clapping—as they are with the performance itself. Whether or not you like Stolz’s piece may be a matter of personal taste, but taste is never strictly personal. It stands at a nexus of hot-blooded issues; issues relating to class, status, accessibility, belonging and not belonging. Taste necessarily begs the question not just of how we assign value to things, but also of who should be doing the assigning. The hipster has come to epitomize for many what’s seen to be the ridiculousness of taste; and so it struck people who hated Interior Semiotics as no mere coincidence that many audience members in the video were punked out, or gothed up, or otherwise retrofitted.

Recently I asked my friend Cole Stryker, author of Epic Win for Anonymous: How 4chan’s Army Conquered the Web, for his take on the trolling of the artist:

Was the reaction to the Interior Semiotics video overwhelmingly unfavorable? Did any 4chan users rush to defend her work?

I actually watched this go down in real time. I didn't notice anyone defending her. It seems unlikely.

Know Your Meme seems to file this under hipster hatred, but in an interview with Rhizome, Natacha Stolz says she believes the fuss has to do with cultural discomfort with women's bodies. What was your take on the comments?

I'd say it's a bit of both, but more than either, the outrage can be attributed to the depicted art scene's perceived lack of authenticity. Anonymous prides itself in unmasking charlatans, exposing corporate secrets and generally fighting for Truth and Justice. In this scenario, Anonymous interpreted the video as an insult to "true" Art. I also think Anons are very protective of the internet in general. As non-nerds increasingly encroach on their territory, they feel as though they've lost something special.

So their attitude was, "These hipster idiots are coming onto our internet and provoking us with their rampant artfaggotry. The internet used to be full of geeks like us, but now it's being overrun by normals trying to be cool, just like the real world we rejected in favor of the internet. We need to put them in their place." So it's a territorialism issue. Anonymous sees itself in part as a policing force that seeks to protect the geeky integrity of the web.

In your interview, Stolz says teachers she reached out to for help didn't get back to her. How might you have advised her?

Change and strengthen all your passwords, amp up the privacy options on your social network accounts, and get rid of any content that could give Anon any clues as to your whereabouts and contact info. Don't engage with Anonymous. They'll get bored if you ignore them.

I'd also suggest that she lay low for a few weeks or maybe even months, in terms of blogging, uploading video content, etc. When Anon smells blood, they'll go to great lengths to escalate the attack. The thrill of uncovering new information to progress a "raid" is intoxicating to a member of Anonymous. So if you can throw them off the trail by not giving them any new material to dissect, they'll lose interest.

Interior Semiotics seems like an example of what academics are calling "context collapse." It appears the video was never intended for more than a small specific audience. Have you seen any similar cases of online communities misinterpreted by 4chan?

Something Awful, the web community that can be considered the most direct ancestor to 4chan has a feature called The Weekend Web, where they'd highlight hilarious comments found in various strange forums: balloon fetishes, furries, end times theorists, etc. 4chan has inhereted this pasttime, most notably in a recurring game called "You Rage You Lose," in which 4chan users compete to post content that would provoke the most outrage. These can be YouTube videos of tweens dancing to Justin Bieber, essays about how hell is an actual geographic location in the Earth's core, or a white supremacist podcast. I wouldn't say 4chan is misinterpreting this content due to context collapse so much as they are willfully ignoring context (still a collapse of a kind) in order to maximize righteous indignation and eventually schadenfreude.