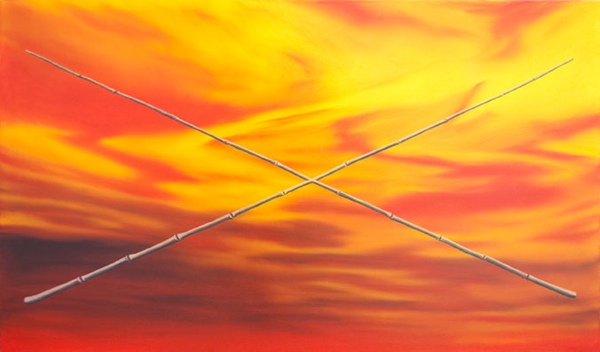 It has been said that one can see the best and worst art of the entire world side-by-side in Berlin: due to its liberation from more explicitly market-driven cares, art in Berlin can be seen as simultaneously less competitive and less desperate—in essence, it strains itself less to reach a hungry market. Berlin's excess art becomes, well, excessive, and the practice of finding good work becomes a sport more rigorous than that of New York.

Wealth in Berlin and the art collections it begets articulates itself exceedingly differently than the more overt wealth in western Germany, New York or London. While to some Berlin may be an antidote for a more market-driven art world, to others, the eastern German city may just be overrun with mediocre art, or plain old boring.

This list of artists is just a snapshot of a small part of a diverse but interconnected scene, with affiliated peoples coming from nations such as Norway, the Netherlands, Greece, Iceland, France, Poland, Finland, Switzerland, Canada, the United States, and more. Although this “scene” has warped and changed significantly since I first began spending extended periods of time in Berlin a few years ago, a number of the key players — AIDS 3D, Rafael Rozendaal, Oliver Laric, Aleksandra Domanovic — remain as integral parts. Perhaps the newest phenomenon connecting this group of artists is the new Neukölln bar Times, owned and operated by American artists Calla Henkel, Max Pitegoff, and Lindsay Lawson. The three undoubtedly deserve recognition in their own right, not only for bringing a community of expat artists, curators, and writers together from all over the world, but also for their own work.

French artist Juliette Bonneviot recently grabbed the attention of the international art world, participating in both the much-anticipated survey Based in Berlin as well as Harm van den Dorpel's acclaimed Rhododendron. Her oil paintings often employ what she calls “miss-appropriation” — placing two phenomena that appear similar but which are conceptually diverse side-by-side in order to parse out the significance of their resemblance. (Oftentimes, the significance is nothing.) Bonneviot's paintings included in Rhododendron take various abstract expressionist paintings, in one case a de Kooning, and place them into a painterly landscape replicated from a first-person shooter game, for example Medal of Honor. Here the aesthetic gravity of abstract expressionism is humorously reduced to level of a common video game―perhaps the lowest of aesthetic lows. Yet, Bonneviot wouldn't necessarily see this as a bad thing for the fate of painting, as she communicates this idea of intellectual flattening through painting in a fine art context, tacitly reaffirming the discipline as a place for cultural conjecture.

For Bonneviot's recent exhibition “Shanghai Gesture” at Mark and Kyoko, Berlin, the artist explains with a laugh that she “wanted to try out some Asian stuff.” Bonneviot bootlegged Ed Ruscha's 1985 Things Oriental, which coincidentally looks very similar to her painting style, and experimented with other techniques typical to East Asian artistry. Here again, Bonneviot purposefully pairs together works on an aesthetically superficial basis, as if to call into question how certain aesthetics and images become imbued with their cultural importance. Hers is a sensitivity particularly emblematic of an internet age: just as in a Google image search, all images are created equal.

Bonneviot is currently represented by Circus Gallery, Berlin, and will mount her first solo exhibition there in November. 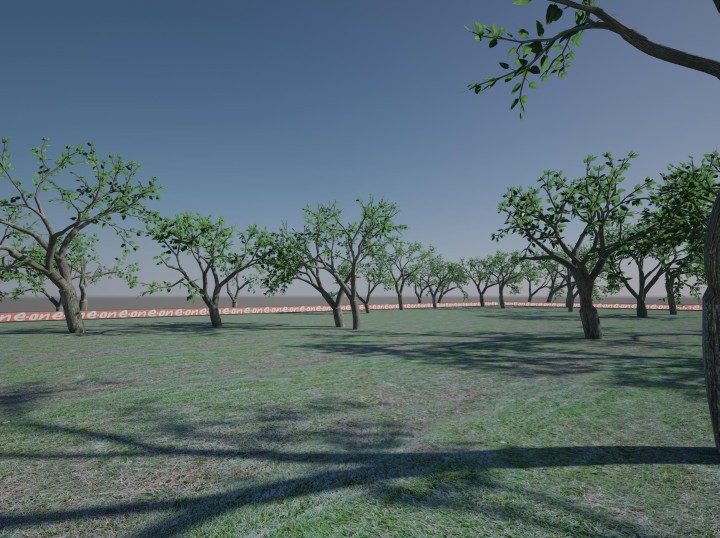 For the recent Berlin invitational based in Berlin, Timur Si-Qin proposed, ordered, and secured funding for a 26,000-Euro-per-day soccer stadium perimeter advertising system. Titled Der Horizont, the ambitious project was slated to be installed for one day in the city’s Monbijou Park as a piece of temporal public art adjacent to a building housing the larger exhibition, commenting on the convergent political quality of both the worlds of sports and art—as well as the architecture and funding models that make them operate. Si-Qin states that he desired to “reframe the idea of the natural” by comingling flora with advertising, suggesting a that the concept of “nature” isn’t so far divorced from advertising as one may initially suspect. Unfortunately, the political entity protecting Berlin’s park system wasn’t a fan of this co-mingling, and put an end to the project at the last minute before based in Berlin was scheduled to open.

Si-Qin’s projects Axe Effect (2011) and Selection Display (2011) also illustrate his interest in advertising and human nature. In Axe Effect, the artist takes bottles of the young male targeted hygiene products and kebabs them onto a sword—sometimes supported by beams or stuck into a pedestal—while the bottles ejaculate musky neon goo. The title Axe Effect refers to the unlimited female attention men will enjoy should they use Axe products, as promised by the advertisements. Similarly, Selection Display takes a stock photo of a conventionally attractive woman and prints it on a large rectangle with oblong sides. The shape of this work mimics that of a conventional human-sized advertisement, which is influenced by carefully calibrated studies on maximizing visibility and stimulation. Si-Qin posits that even a critical mind is still effected by such advertisements, which boil down to our most basic animal desires relating to sexual needs and desires, and that perhaps art objects—always competing for your gaze—pursue the same. 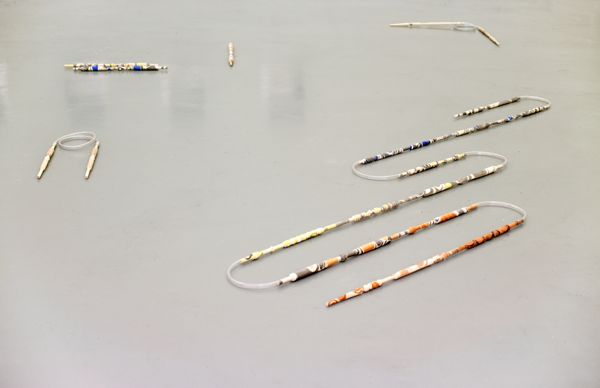 A Dutch artist and writer living in Berlin, Marlie Mul is often grouped with an internet-oriented peer group, such as those in Rhododendron, though confusingly she has no history of working on or through the internet. In fact, Mul has long created works that almost ceremoniously celebrate their materiality, including an early series of tiny, pixel-like cubes of Styrofoam stacked into intricate, monumental installations such as life-size domestic interiors. It’s largely Mul’s attitude of resourcefulness connecting her to tech-oriented peers. As in the case of her laid-down wooden rods shown within Rhododendron, which are chiseled to a flimsy, decorative rod by a woodworker in Berlin, Mul often outsources the fabrication of at least part of her work. The artist combines her manufactured components with hand-worked flourishes to add an effect that looks both physically substantial and personalized, garnering the most artistic bang for her buck. For example, the dowels making up “Your Wet Sleeve in my Neck” are marbled according to an ancient Japanese water bath technique, for which Mul uses her apartment bathtub.

Also compelling are Mul’s curatorial projects, which like her work oftentimes grapple with collectively felt personal issues usually not broached by art. In one exhibition, Mul ponders the joys and complications of being in a long-distance relationship; in another exhibition of her own work, she considers the trying process of quitting smoking. With Norwegian-German artist Yngve Holen, she founded XYM, a publication inviting artists to create PDF projects, available with a limited time span through the XYM website.

Mul will present a solo project at SPACE, London in the winter of 2012. 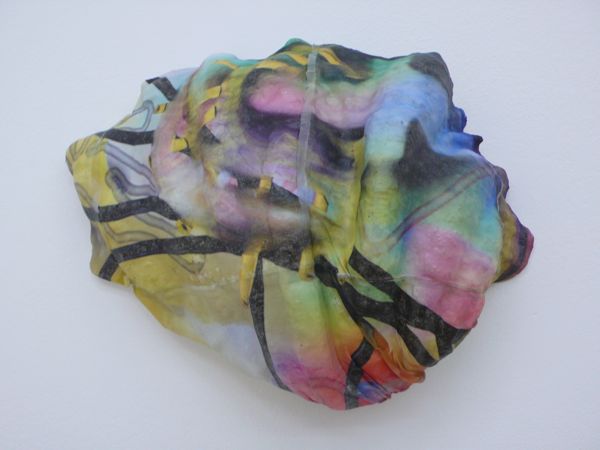 While waiting for Pariset to make a pot of tea in her studio, which is a disused corner storefront deep in Berlin’s Neukölln neighborhood, I realized that the windows had been coated with a privatizing film, presumably so she could work freely without any gawking onlookers. When she came back from the kitchen I remarked that it was a nice solution to working in a storefront studio space, to which she replied proudly that she did it herself, with yogurt. With yogurt? Yes, seriously, with yogurt! Apparently one can squeegee yogurt upon your windows for a frosted effect, and manage to make it look rather professional.

This somewhat strange story is emblematic of Aude Pariset as an artist and person—while remarkably resourceful and self-directed, every move she makes comes from pretty far of left field. I first encountered Pariset’s work at her solo exhibition, Len Jyan, at a small gallery called KWADRAT in Berlin. For this show she exhibited several casts of oversized hard-shell clams, which were affixed with rice paper printed with untitled PaintFX posters. For those unfamiliar with PaintFX, it’s a now-defunct all-male group of artists tooling around with 3D painting software, which often end up looking like techno versions of sploogey Pollocks or de Koonings. That Pariset thought to emblazon these images on clams was absolutely remarkable and hilarious to me. Len Jyan continued to open itself to a slightly feminist reading with an obsession for representations of interior space. Linoleum floor coverings are rolled up and cut to look similar to didgeridoos, while a video, Panaviz fullscreen tour, splices together screenshots and clips of 3D tours of hotel rooms.

Pariset has recently transitioned to thinking more about populating urban space, working on a series of panels printed with found digital images of the upholstery found on the seats of various cities’ mass transit systems. She is also working on a series of digital prints of natural fauna washed and eroded into the symbol of a graffiti tag.

Berlin is a Wondercity, Its got everything. These Snaps are very Interesting for me. German Stuff is really good. These Are interconnected snaps. :) I Travel a lot in Germany and Europe.