Your most recent work, Video Art Manual, was shot in HD, but than, in addition to the HD exhibition version, you also created a standard DVD version that was released as part of the Texte zur Kunst editions. Can you talk a little bit about this shift between technologies and its meaning?

Texte zur Kunst asked me to make a DVD edition for their magazine. It came out much better than I imagined (in terms of image quality and general quality) so I thought it’s a shame to show or circulate the work only as a simple DVD and not show the full quality of the image (I shot some parts in HD and they look great). I also needed the money, so I thought I better sell videos through the galleries as HD editions separated from the Texte zur Kunst edition.

As an artist working in a time-based medium, you are quite preoccupied with he time viewers spend with your works, so much so that for your untitled piece for the 2009 Venice Biennale, you had the wall text state that the video is nine minutes long instead of sixteen. Do you think people invest more time when watching your pieces online? And how different is the experience of watching them on a computer screen as opposed to an exhibition space?

I think people invest less time watching my work online—I think it’s easier to be distracted by other things when you are watching a video on the internet. It’s hard for me to watch videos online without skipping forward or pressing refresh on my mailbox. I think the experience depends on the viewer. I personally feel more comfortable downloading movies and watching them at home, feature films included. The experience depends on the viewer’s mood on that day. I don’t try to produce more than the content of the video. I see it like a book. You can read it home and you can go to a public reading…I think it’s more about the content than the sensual experience.

Your YouTube channel is incredibly active. I love its description, too: “The definitive collection of Keren Cytter, the video artist from an obscure country.” What led your decision to post all of your video works online, and why on YouTube as opposed to your own website?

I did it many years ago. Actually, it was a friend staying in my house who opened a YouTube channel for me. He also wrote the description. I just thought it would nice if people were able to watch my videos without making an effort. Now I also have a website where most of the movies are linked through Vimeo. A friend of mine bought me the domain name for my birthday and another friend urged me to make the website. I wasn’t so eager but somehow he convinced me. I think his enthusiasm caught on to me.

The scripts for your video works are very literary, their themes could belong in Hollywood, the references hover between Antonioni or Polanski and television melodramas. Do you see these as contradictions or oppositions, and if so, do you think they are resolved through the techniques you employ?

Most of the time I don’t differentiate the themes of my scripts by genre. I think viewers label the theme and define the genres through them. I don’t think about it much or so specifically. I do sometimes use movies or stories I like as a starting point, but I don’t really analyze it or spend too much time thinking about the references. 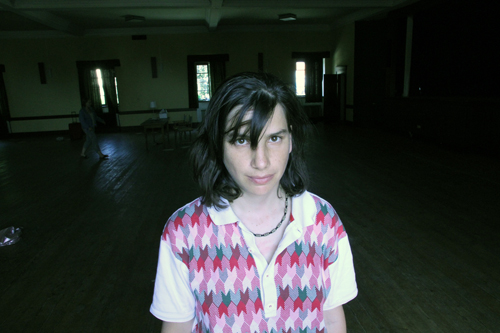 I started eleven years ago. My father bought a camera and I stole it. At the time, I was painting a lot, and thought it could be nice to do something different.

Tools? I guess you mean a video camera. My father bought a camera and I stole it. I wrote a script and forced my friends to act in it, I forced another friend to edit it. Later on I learned to edit myself.

I studied history and literature in high school in Israel. Then joined the army and left it after six months (mental health problem). I then registered at a private (and not so great) art school. Was kicked out after two years. Tried another art school (a better one) and left a week later. Started writing art reviews for a daily newspaper and after a year started making videos. After another year I left for Europe with a scholarship in Amsterdam.

I draw when I’m nervous—small drawings. I don’t like calling video art “technologies.” I already got use to the idea of electricity and projections. I really don’t think it should separated from other mediums. The word “technology” is very general. My father used to work as an electronic engineer. I think he was dealing with technologies more than I am.

No, I hate social activities. Except dinner and lunch—I don’t like eating alone.

I was a cook for four years, a waitress for one month, a copywriter for one day, a producer in a magazine, a runner on a set of a soap opera, and a journalist…I think the combination of them all influenced my work.

Nothing specific—things I see and hear. Everything, I guess. I do make a living from my art and I do have deadlines and obligations but it’s not really like a job for me, so I try not to focus my work on a “subject”… I’m trying to deal with my work the way I deal with my life—to keep it open and remember that it’s only one option of what I could do with my life.

No. I don’t like collaborations. I think it’s a compromise.

No. I can’t read essays. Beyond me.

I think I’m not really interested in art and exhibitions displays. It’s really not my thing.