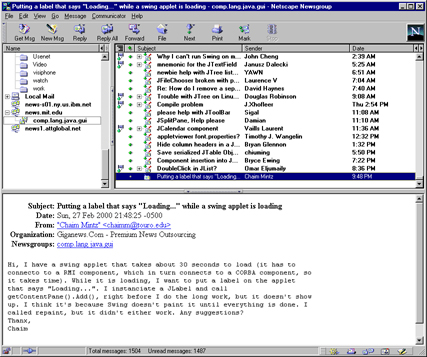 Red Hook is a new online journal that originates at the Center for Curatorial Studies at Bard College, NY. The new journal considers online readership on a number of levels, such as its self-reflexive discussions on what an online journal on curating could be, its consideration of other online platforms, and its relationship to the online image.

In his text for the journal, Ed Halter, visiting faculty at Bard's Electronic Arts Program (and Rhizome contributor) recalls the early days of Usenet, a collection of internet discussion boards, and focuses on alt.cult-movies, an active film discussion board. The essay looks into the character of Cosineve, an unknown writer who appeared on the discussion board, writing reviews under numerous online identities but in a consistent style. Cosineve's texts, about twenty in all, spanning between 1996 and 1999, are faux film reviews, the titles of which all used the word "fish," and—as Halter points out—may have referenced real movies.

Halter surveys a certain culture of online cult followings before it had permanent homes that "domesticated" these phenomena on dedicated (more or less so) websites:

I was not the only fan of Cosineve's work. Within days of Cosineve's first flurry of posts in October 1996, responses began to appear from other readers. Following up a review of Death Fish, one user asked "Does anyone else think this guy's actually way ahead of his time, and is spouting something that we, as mere mortals, just can't comprehend?" "He's definitely on the *Cutting Edge* (of something) and should be encouraged to continue," replied another. "He could be the next Tarantino, for all we know." A self-described "recent convert" suggested that "there should be a separate newsgroup for the fans of the fish to discuss these deep works." A user at the newsgroup misc.writing noted that "there is an amusing fellow named cosineve who writes stories about a very strange fish […] He's developed something of a cult following over on alt.cult-movies." Readers were chatting about Cosineve's work as late as 1998.

"On Cosineve" is an account of the early days of online prose. Halter pastes full texts by Cosineve into the essay, marking the distinct difference between his own writing and the style of these online personae. Other readers of alt.cult-movies followed Cosineve's prose, bringing up the work of James Joyce and Samuel Beckett, Jack Kerouac and William Burroughs as possible precedents of Cosineve's style, and discussing ideas of authorship in the then-nascent type of online prose. (Halter interestingly ties this interest of the discussion board's participants in the politique des auteurs to their cinephilia which resulted in the constant application of ideas of authorship.)

Cosineve's mysterious origins are masked by multiple screen names and identities, each given the status of a fictional character within his own stories. His emergence on Usenet brings to mind the qualities of the old Internet, before social networking took hold, when online personae were much more loosely connected to their real-world authors.

Halter does not attempt to retrace who Cosineve was, except for a number of entertaining traits. Nor is that interesting in this context. This early example of online narratives is compelling for its specific context, its early adaptation of forms that echo in online culture to this day, and its fantastic interposition of the possibilities that online culture offers to writers, Halter and Cosineve alike.