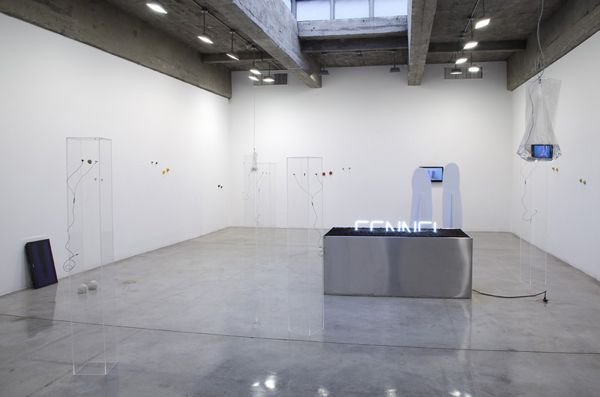 Normally, if one were to ask whether it’s possible to successfully create art by smearing your own blood on a gallery wall, and to evade coming off like a desperate emo teenager, I would respond with an unequivocal “absolutely not.” Blood is one of those materials that you not only want to avoid hanging out with, but also, in an art context, it comes with the most exaggerated eye rolls and “what-the-hell-were-they-thinking”s imaginable. Yet, in his latest exhibition British artist Jack Strange reveals a trick or two to convince us that bloodbathing a white cube, among other head-shakers, may in fact be a right step in considering the art of the present. 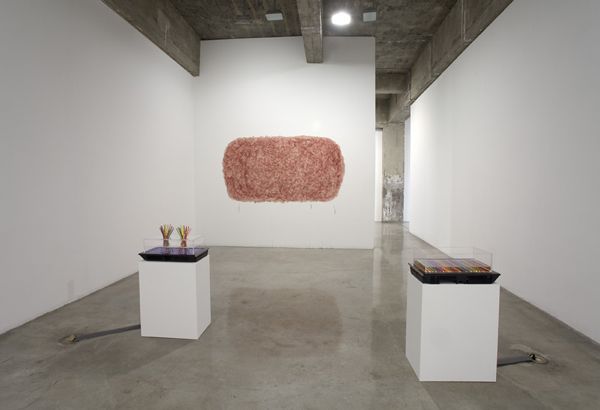 Jack Strange’s second solo show at Tanya Bonakdar, “Deep Down,” peregrinates through various media. The show coheres by way of an overarching curiosity for the slippery human consciousness, and the all-too-common instances in which we as people project our image onto dumb objects and animals in order to better understand ourselves. Beginning with the aforementioned over-the-top cloudy smear of his own blood (replete with HA HA HA’s inscribed in pencil), the show meanders through overly slick Neo-Dada assemblages of fruit pits suspended in vitrines fitted with earbuds, to cutesy cross-sectioned vegetables seemingly springing off the wall, and perhaps even less predictably, a curiously dry sound installation that may have well as been made in the 60’s. Strange also dabbles with some “new media,” encasing an iPod Touch in a ceiling-hung plastic bag, which houses another plastic bag filled with water. The works, titled “All Fish,” “All Sharks,” etc., play cartoon aquatic animals on the encased iPods, the animations originally created for an e-card. The e-card animation is then programmed to utter its stream of consciousness, “left, right, slow, sinking, drowning, swimming, right…” With weird convoluted pits appearing like brains with invisible heads wearing headphones (titles ranging from “Blues Avocado” to “Pop Plum” and “Electric Olive”) and vegetable tops joyfully frolicking off the wall and into somewhere as sanguine as Dora the Explorer’s kitchen, Strange delights in obliquely articulating the ineffable through images and objects, specifically combining natural flora with manmade elements. 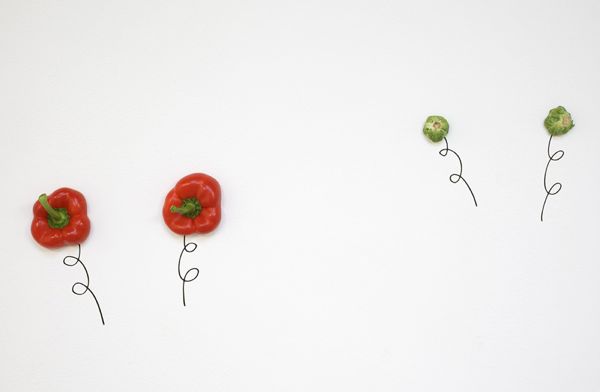 Evincing Strange’s tenacity to uncover the inner workings of our minds, his sound installation “Staring into Seeing” directs its listener to sit knees-forward to the wall and fix their eyes upon its whiteness, training them to not waver or blink in the slightest. It is as if Strange has created an oddly fascist manual to train his viewers to view his or other people’s art with a most ideal comportment—their attention fully fixed on the object. Another interpretation would be that Strange desires to illustrate the impossibility of viewing art in the space of the white cube gallery (whose neutrality and sanctity have been long-challenged), calling attention to the myriad distractions preventing the viewer from the simple task of focusing on a plain white wall. 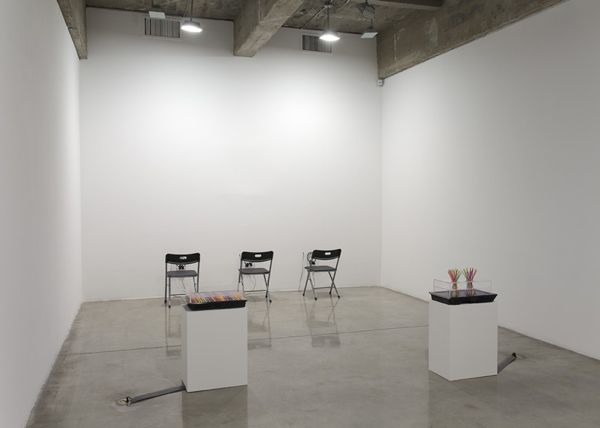 The British artist borrows from so many aesthetics, philosophies, and art historical moments (some of which seem too soon to safely ironize) that at times it becomes difficult to gauge which end is up—how cognizant is the artist of the material and trends that he references? Is he a nostalgic retro-conceptualist? Does he know that the combination of white neon with tons of vitrines harkens back to the embarrassing too-cool industrialisms of yesteryear, say a 2007 Banks Violette? Taking into consideration Strange’s ridiculous usage of his own blood, I’m motivated to trust that the artist knows he’s bordering on cliché at times, yet one cannot be certain.

Strange does at least appear exceedingly aware of what art looks like today, or how we perceive it should look in its best and worst incarnations, and frequently works to disrupt and dismantle these precepts. Yet, for all his dutiful attention toward screwing with our ideas about art and its relation to the act of viewing, do his ideas about consciousness reach beyond the context of art? Suggesting this is a 2009 interview with ArtReview, in which Strange waxes on the coping mechanisms endemic to contemporary urban life, “For me living in a city environment can create a lot of inward identification and I think that can become quite lonely and repressing. It's a more ‘myself, myself, myself’ kind of experience.” One begins to see the connection between viewing art and viewing everyday objects and the mental and emotional processes we go through in order to understand ourselves and our relation to the world. Strange refuses to utter full-stop theses on such ruminations, and instead prefers to prod the mind into considering its own abstract meanderings.