Revolutionary Convergences: History and Symbolism in Anonymous and OWS Art
By Jason Huff

Left: United Nations Officials with an unofficial U.N. flag, 1947, Right: Anonymous members with flags in the UK from flickr, 2008

Anonymous operates under a well-designed logo. Does it belie their dispersed identity or siphon power from historical symbols to disrupt our own associations to them? The aesthetics of past revolutionary movements point more toward the second possibility. We see this link to history in the poster designs of Occupy Wall Street—new digital tools under visual constraints produce an early 20th century screen printer's aesthetic with formal motifs of the same era.

New technology and historical technique are converging, and so are the symbols being used to deliver the message. The visual traces of current aesthetics draw on the deep roots of history and the powerful associations images and symbols therefore possess, allowing us to make quick associations to the power of the Roman Empire or the strength of the Greek Gods all in a glance at a tiny logo. Turning back to Anonymous—What can we learn by systematically decoding their symbolism? And how do their aesthetics relate to their actions as international and anonymous activists?

Searching for these convergences online often reveals infinite Platonic shades of nearly identical images. But occasionally, if you sift past the first helping of results, you can uncover some remarkable connections.

Born in part from the image boards of 4chan, internet image culture was Anonymous's early stock-in-trade. But above the rabble of trollish GIFs and dinosaur ASCI art they have developed themselves into a brand. Their logo, which dramatically leads many Anonymous affiliated YouTube videos, is wrapped in screen interference, reminiscent of military surveillance cam signals, and backed by equivalently dramatic classical sound clips. On the AnonOps blog the logo lives in static forms; black and white, ironically layered against a sea of 1s and 0s, and as the favicon.

The logo is a simple and strong image, and admittedly slightly familiar in some ways. Perhaps the Anonymous designer was channeling the tactics of the Polish revolutionaries of the 1980s. In a chapter from Lawrence Welscher's book, In Everything that Rises: A Book of Convergences, he describes the Polish Solidarity movement's powerful act of reclaiming their country's flag as a bloodstained symbol of their own power and independence. But what symbols were Anonymous trying to reclaim?

The question mark-headed figure's background is a diagram of a globe and arching leaved branches. On a second look, the similarity to the United Nations logo created in 1945 by Donal McLaughlin is impossible to ignore. For Anonymous, subverting the traditional associations of this international organization's logo is ambitious and transgressive, but also totally in line with their aggressive stance toward internet freedom and freedom of speech.

Both the U.N. and Anonymous use the basic relationships in the logo of the peaceful olive wreath surrounding the globe with a politicizing dichotomy—an image of global peace veiling secretive operations across national borders. But this particular configuration of images came together long before the 1945 creation of the U.N. logo.

Douglas Rushkoff's talk at the recently evicted Occupy Wall Street library aided my search for the symbol's ancestor. He created an argument around the formation, existence, and history of centralized currency. Extending this idea, I searched for and found the image of a 2nd century BC Greek coin. Sure enough, on the back of the coin there were two olive branches in a circular design. The olive branches surround Zeus's lightening bolts. Not quite the globe, but certainly an all-encompassing symbol of power from the period. Global currency, as Rushkoff argued, unjustly abstracted the value of trade between individuals and put too much power in the hands of a central governing body. Currently, Anonymous is strategically fighting against an analogous centralization of power on the internet.

While I looked at the Anonymous logo and tried to imagine the figure without the backdrop of the U.N. logo, I noticed a second reference to the Greeks. The figure in the suit was missing his head and arms, but the olive branches in the background acted as makeshift wings. In image terms, what is this similar to? The statue of Nike, the Goddess of victory, which is at the Louvre, Paris—an iconic monument and a historic symbol of triumph over adversities, distinctly overused by advertisers. In the myriad of image search results for Nike was a rendering of her on a Greek amphora standing with her arms open, one foot up, not disembodied, a dance-like pose in her stillness on the vessel.

Left: Anonymous logo, Center: Winged Victory of Samothrace circe 190 BC , Right: Winged Nike on a Greek vase from 485-475 BC

This caught my eye for two reasons; the first more conspiratorial, and the second slightly peculiar. Stuck on antiquity and searching for all previously mentioned symbols; the earth, the goddess of victory, and olive branches, I ended up with an Italian Renaissance inspired image—staring at a Tarot card. I've never held much faith in them myself, but I decided to follow along. 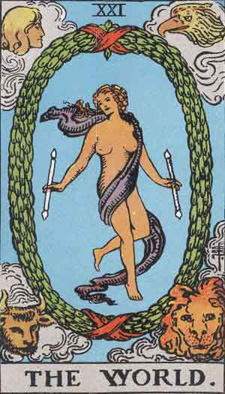 The figure on the 11th card, symbolizing the world, had an eerie resemblance to the pose of the goddess of victory from the Greek amphora—and was also surrounded by a wreath of leaves. Although Tarot cards emerged first to extend the illustrative trumps in early playing cards during the 15th century, and typically used for speculative divination, some details of the card provided yet another convergence. The most curious aspect of the design was the image of a bull's head in the lower left hand corner. If this dancing woman symbolized victory over the earth and she was just a few inches from standing on top of a bull, then there was certainly another image that came to mind. 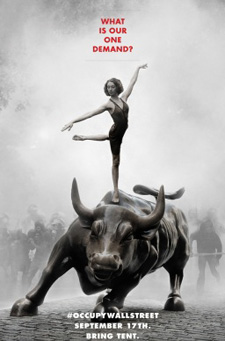 Here is the poster that helped launch Occupy Wall Street in September, designed and distributed by Adbusters back in July. Its composition is as clear as it is mysterious. The dancer, holding an arabesque, tames Wall Street's bull—an icon of the power of centralized global finance. And who makes up the crowd of people in the background? Anonymous protesters. From here the list of classical references deepens and can quickly slide into connections that fuel global conspiracy theories: The abduction of Europa in Greek mythology, Zeus as a white bull, the €2 coin, and Anonymous's "We are Legion" mantra.

Surely these stacked references to Greek symbolism are not unique to this era. Corporations and countries have used these references for years—familiar symbols understood since grade school to present peace, unity, and power. So perhaps it is appropriate for new movements like Occupy Wall Street and Anonymous to recast these familiar symbols in hopes of resetting our subconscious associations.

A similar formula of aesthetic reclamation happens almost weekly with OWS posters. They pull from 20th century protest poster designs that galvanized movements of people 10,000,000 strong. The original decades-old aesthetics developed out of need, because resources were scarce. Printing and pasting happened as quickly as damaging graffiti and removal. OWS poster aesthetics hark back to powerful movements of the past, tapping into culture's collective memory in hopes of reawakening the spirit of action. 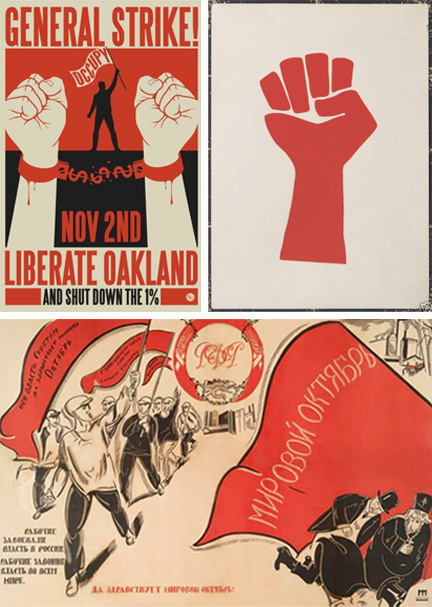 Early revolutionary aesthetics developed under technological limitations in addition to resource scarcity. The images, culled from more localized environments and references, echoed exponentially in the collective consciousness of those who saw them. Activists today have an unprecedented spectrum of tools for communication, production, research, dissemination, and attack. In an escalating tone struck at the birth of desktop digital publishing in the early 1980s and amplified by the internet ever since, new protest poster designs click across countries in seconds, generate hashtags, get remixed and recycled on the screens of millions of users every day.

You can't copyright universal symbols of power. And because of improvements in technology, the once unbalanced relationship between large corporations and activists has shifted. It is obvious in the actions of Anonymous, but you can also see it in the aesthetics of OWS. The multitude of posters are as beatnik as they are cinematic. The range of aesthetics is a syndrome of internet culture at large, but also a reason to keep that culture alive and unrestricted. And this leads us more or less back to the mission, actions, and aesthetics of Anonymous, a group of hackers who were once the back office quiet types who droned on under fluorescent buzz and have now awoken to realize their hulk-like strength—all under the guise of an appropriately powerful logo.

Let's go all the way