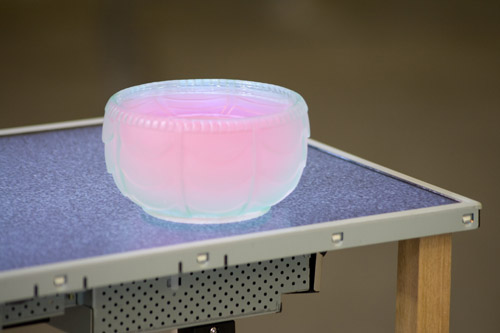 You have a very interesting relationship with objects and things. A slight touch, for example in Kicking Me When I'm Down of 2008, where a laundry drying rack is compiled from strip lights with white underclothes hanging from it, changes the meaning of what we see as an object—be it neon light, drying rack, or drying clothes—and how we perceive material, things, and art historical tradition (which is my way of saying Dan Flavin). Can you talk a little bit about the use of found objects, and whether or not you see your work as part of a growing discussion of the "thing" (or animism, or thingness, as it has been referred to as well) in the art context?

Aside from those drying rack pieces which were about strip lights coming from a design background to art and back to design, I don't really think about the history of objects in terms the art lexicon of used material—but rather something more in tune with its position outside of the artwork. I feel it's best to talk about the material in my work in terms of pre-fabricated or fabricated objects because sometimes I'll find something and use it but just as often I'll find something and have it remade slightly different, so it's slippery referring to things as a 'found object'. I think either way, made or re-made, it still comes to me at my studio as something new that I have to work out in the same way. And as long as the object operates in the way of a found object—has a previous social use or familiarity but is somewhat impersonal in its making—then that is part of a language that I've been building up. And it's increasingly important to me to use material that is more specific in its role, i.e. being understood as an object, because it's less malleable in the mind of the viewer and is more of a challenge to get it to really resonate alongside something else. What interests me is this forming of a mental logic out of the associations that are intrinsic to objects and material.

You include a lot of consumer products and recognizable brands in your works, from perfume bottles to mouthwash. Can you talk a little bit about what interests you in consumer culture and the idea of branding and its look?

I like the idea of committees or groups of people deciding upon aesthetics for their products and how much consideration is put into it. Like with Listerine—I'm interested in the color palette for the whole range—and how they will introduce a new color from time to time, but it will really had to have been agreed by lots of people. In a way I don't want to deal with it or at least the colors themselves, just the idea of color and a series of color, and so taking something like that and working within it, just makes me feel confident that they are good colors because the focus groups agreed with it.

And to stay with the consumer products and found material, when looking at your works from the past few years, there is a strong sense of the physical aspect of the work, even as it moves to have more of a minimalist look, especially when considering, for example, that the works in the Φ series also smell like Listerine. What interests you in the tension between handmade and mass-produced objects, and how do you think about these objects' physical presence?

My interest in my own hand has definitely been reduced to a minimum as the work has developed over the past couple of years. I just stopped making things myself as I couldn't get the aesthetic I wanted, and therefore pieces wouldn't read in the way I intended. It perhaps was more a means to an end as a way to place resilient found objects in conjunction to other element, and have the other element accommodate itself. But this has shifted to having the 'variable' parts of the work fabricated in similar way to how the found objects are produced. 'Handmade,' 'hand machine-made,' and 'machine made' are a sliding scale especially in terms of thinking about fabricating things. For example, I recently had an Ibanez 777 guitar neck remade by a guitar luthier but with minor alterations, and he used a CNC machine to do it, so it's not really handmade but it's not mass produced and it's not found. I'm not so interested in the 'foundness' as I am in the visual and personal language of produced things—they're slightly removed, slightly distanced and detached even if they have 'everyday' and very close associations to the self.

You seem to have a very specific aesthetic, built on a kind of sculptural collage, be it the superimposition of taxidermy with strip lights, or the glass and mirror wall-based works (My Work Here is Done). After I mentioned Minimalism, Dan Flavin, and mass-produced objects in art, how do you think about the formal aspect of your works?

Going back to what I was saying earlier about a mental form being constructed out of associations of material…this is just as much a part as is a physical formalism, which is born out of exploiting the intrinsic properties of the same materials. When the formal and associative aspects of the work are codependent or inseparable then this is when I feel like the work is successful. Talking again about the Listerine pieces; mouthwash and stainless steel are evocative of a certain outlook but the double reflections of both surfaces sitting on top of each other is just as much the piece as is the invasive smell. Something as minimal as a color field square on the floor ends up filling every inch of the room it's in. You couldn't take one part away except to change the shape of tray or the variety of mouthwash, which I do with each iteration.

Can you describe your other two projects, Mono and Ofrah? They both seem to compliment your work in very interesting ways, especially when considering some of the aforementioned ideas, like the physical aspect of Mono, which is a print periodical, and the minimalism of Ofrah. Do you see editing a visual publication and making music as part of your artistic practice?

In hindsight Mono was like the My Work Here is Done series—a way to set up some constraints and let the content work itself out and have the final say. I didn't think this at the time of course—I just wanted to make a publication that was tangible and show peoples' ideas. It was both a reaction to the internet, in that it is printed and distributed in a usual way for periodicals but then also it couldn't have happened without the internet, in that it is free and there is no text and is just a sequence of images like a blog post with no comment. I think there's something nostalgic about it, clinging to a medium that doesn't make financial or logistic sense.

Ofrah is a musical project with Jack Vickridge. We recently started making music again as the 2 tracks on the site are actually from 2007, when we were living together during college, but we share a studio now and so brought our equipment down there too. Jack produces the whole thing and plays piano and a sampler and I play guitar. It's really very lo-fi, just working with what equipment we have and improvising with sound. 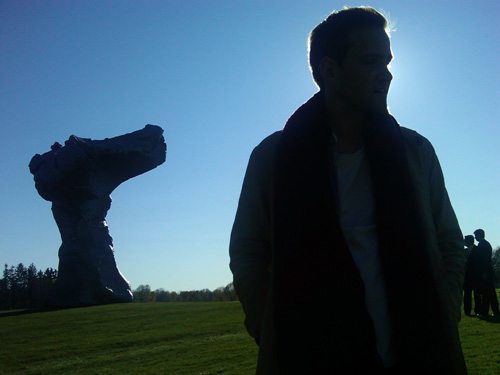 My family got a computer and the internet when I was around 14. I got addicted to it pretty much instantly and started making Geocities websites for musical projects and making album covers on MS paint.

The best tools I have are a tape measure and Google Sketchup and one followed the other.

I went to Kingston University doing Fine Art and then went straight on to the Sculpture course at the Royal College of Art.

Any physical technology kind of seems traditional and what bits of technology I use are freely available and pretty ubiquitous. On one level I'm using it all for its natural form.

Yes—I put out two issues of Mono a year and have started on recording more material with Jack as Ofrah.

I work in a library, which is very flexible and great in that respect. It bears no relation to what I do outside of it though, other than offering some time to not think about the studio.

Aside from Mono and Ofrah, I made two collaborative pieces this year for two group shows, which was my first time making work with someone else—one with Jack from Ofrah and one with Richard Sides.

No I just look at art.

No I don't really read much art writing other than magazines.

I do wonder how things will get shown or exist a long time in the future in terms of conservation. The whole Flavin T12 strip lights going out of production really highlighted how art can be tied to the availability of certain products, and I find myself increasingly in that position. How easy will it be to get a PC running Windows XP in 50 years or an LCD screen that doesn't have dead pixels? I'm finding it difficult to find someone to fix my Sony Trinitron monitor and that's only 20 years old.