Virtual Spectacle: A Conversation with Wafaa Bilal
By Orit Gat 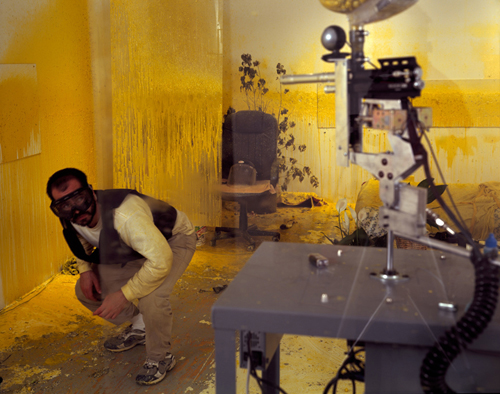 For the past ten months, Iraqi-born New York–based artist Wafaa Bilal has been documenting everything that happens behind him. A camera has been fastened to the back of his head that automatically takes a photograph every minute. The project, 3rd I, is an attempt to capture the mundane, to create an archive of the everyday we leave behind, and put it all online. Two months before 3rd I culminates and becomes an inanimate archive and a few days after Bilal changed the mounted camera he has been using for the project in favor of a new one, designed to match a plaster cast of his skull, we met to talk about it and some earlier works, and talk about ideas concerning the archive, online and offline space, and slowness.

When considering the extreme nature of some of Bilal's works, like Domestic Tension, where the artist lived in a gallery for the duration of the performance, allowing online viewers to direct a paintball gun at him, or Virtual Jihadi, where Bilal casts himself as a suicide bomber in an Al-Qaeda version of a videogame called "Quest for Saddam," it may induce viewers to discuss these in terms of spectacle. In fact, the spectacle here is part of the performance and should not be confused with the point of the performance. In conversation, Bilal—an artist who thinks about his work complexly and discusses it eloquently—talks about his recent work 3rd I, as well as past works, in terms of his dialogue with the history of art, with the public, and with his personal engagement with politics and history.

You talk about 3rd I in the context of ideas of "slowness." This term is becoming increasingly commonplace, especially among people who work with new media. But your idea of slowness includes an intense, long-term commitment too, that is political, physical, and emotional. Now that the project is nearing its one-year finishing line, do you talk about slowness differently?

You're right. In the last few years, a lot of people are trying to slow down technology, I think this nostalgic notion of technology or interactivity is disappearing. I don't know if it's a fatigue or if the medium exhausted itself because there was such a great promise for interactivity and I think artists found their limitation with it making it increasingly complicated. In terms of slowing things down, we are so overwhelmed with these images that we lost any still moment in personal space, so a lot of us are wishing, I don't know if it's possible, to slow things down and shield that personal space. So far I haven't found it possible, but I'm wishful. Also I am hoping personally that people would have the time to absorb what we, as artists, create. There is an image overload, there is a content overload, we are saturated so we cannot observe or understand what is being projected for us to interact with.

Your work requires more than just viewing, it invites the audience to join in, as in Domestic Tension, or to think through the intricacies of online presentation. What has your experiences with an online audience been like, and how was that different than the audience in the gallery? Especially considering that so much of your work is in continuous dialogue with the history of art, was the decision to live in the gallery an echo of the history of performance art and performances where artists live in the gallery space? Is that something you were thinking about when preparing for Domestic Tension?

There is a long tradition of this. I'm thinking about Joseph Beuys's durational work. There is a parallel between I Like America & America Likes Me and Domestic Tension. We both lived with the work, but with work of a different type. One is organic and the other man-made. Fortunately for Beuys, he managed to live with a natural one and domesticate it. But with a gun that would have been different. I think the decision to move into the gallery space was important because the gallery or the museum still function as physical platforms; it is a place of social interaction. It's a public space, so when it comes to Domestic Tension I debated whether this piece should exist in a home, a warehouse, or a basement, where there would be no access to the public and I came to the conclusion that the public needed to come and visit and that was a very big decision.

Did you have an interaction with the public?

So much, so much.

Was it more constructive than the interaction you had online?

A lot more. And I think that was the result of the face-to-face aspect. Without it, the project would not have been able to sustain itself, because people brought food, water, and—I must say this—they brought paintballs. There were people who were concerned about my wellbeing and people who were interested in the sustainability of the project. Like the example of the paintball store owner who drove all the way from outside of Chicago to come and visit me and bring boxes of paintballs he donated to the project.

So much of your work applies politics directly to the body. Can we talk about commitment a little bit and the question of body politics? It seems so intense, especially considering the fact that as we are sitting here there is a camera connected to your shirt that is continuously taking photographs. Are you constantly aware of it? Are you thinking about it? Or did you kind of get used to it?

Once in a while, I have to turn on my computer to see if it's working, especially now that the camera is a clip-on, the wires can disconnect [as mentioned above, Bilal had since changed cameras. -OG]. In terms of thinking about it, I do tend to forget about it.

I thought it could be funny, that while waiting for you I could check the 3rd I website to see if you are on your way or not.

The body politics, as you call it, started with thinking about performance, and ideas of immediacy and mediation. A lot of our experiences are mediated through an object, but performance has a level of immediacy, which I think affects our body directly because it happens in the present moment. It has an impact, a direct impact. That's why, you see the body is present in all of these pieces, Dog or Iraqi, Domestic Tension, and 3rd I. After going through this one, though, I don't know if I could do any more pieces that directly use the body because this was really, really tough, in terms of long-term issues too. I want to go through this one and then maybe think about engagement in a different way.

Screenshot from the 3rd I website during this interview.

It's also really interesting because this piece is so much about thinking about what documentation is, what the mundane is, and what we look at when we look at a performance piece, but the other ones aren't very well documented. In a way, a lot of your work revolves around ideas of archiving and our relationship to history. You seem to think about your work so complexly and documentation includes research into a work after it takes place, and I wonder if you think about past works in those terms.

Dog or Iraqi, for example, wasn't much documented. It was very ephemeral, the website disappeared, and now it's gone forever. Even the water board itself I only have a very tiny clip of, because I saw it as a performance that should live and disappear. But since then I've been thinking about documentation a lot. I think it is important that these performance pieces live on through documentation and I started thinking about archives as well, because these pieces and their impact are important because they become part of history whether we like it or not, they become part of our point of view.

At a certain point in time.

Exactly, so I started thinking that whether I like it or not I have to archive. So Domestic Tension has a very good archive, but it was never shown. There are thousands of pictures, hours of videos…

No, none of it is online. I mean, there are 3000 pages of chat rooms, every IP address, all still in digital form.

Are you thinking of doing something with it?

I think it would be really amazing to think about doing something with the archives of all of these pieces. Domestic Tension, in an archival form, is going to the Jakarta Biennial where I will recreate the room in the gallery space, the physical artifact that was left, but there is still so much left. I've done it twice before, and when people ask for the piece I say it's not going to be interactive—it lived in a certain moment and it is done. Now it has to be an archival form, documentation.

And people still interact with it, they think about it and research it. In my dictionary, looking something up on Google counts as interaction.

Very true. There is a huge amount of archival material, and all the videos that were released during the show are still on YouTube so people go and look at them.

3rd I's archive is just massive. The other day I was thinking about it, a gallery in Dubai approached me about recreating 3rd I in a different form. If I only run the pictures—at 60 images per minute—it would run for eleven days straight. So if you think about the number of images here—there's going to be about 500,000 images by the end of the year. And besides, the documentation, the different cameras we went through, there is so much here. I am interested in, at some point, exploring these projects as archives. For example, I don't think the interface of 3rd I's website is going to change when it becomes an archive—I'll leave it the way it is, with the last image taken as the first image on the site. 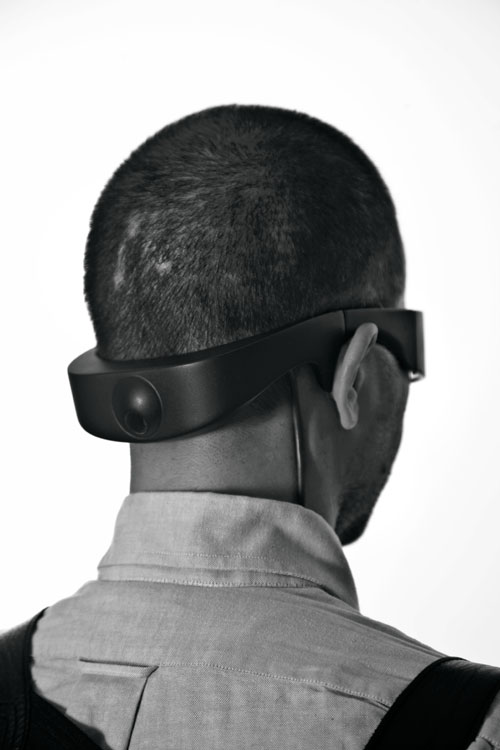 The new 3rd I camera.