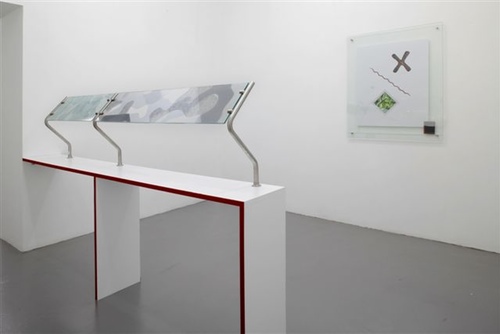 The infamous, brackishly titled Berlin-based duo Keller/Kosmas (Aids-3D) have exhibited widely from an extremely young age. Dropping out of the School of the Art Institute of Chicago and moving to Berlin at age 20, Keller and Kosmas became known in the late naughts for their dirty-style website documenting static works with a fantastical, conspiracy theorist sci-fi sensibility, in addition to weed-infused performances of laser shows and naked babes. As an artistic entity, Keller and Kosmas essentially grew up online, and for better or worse, in the public eye. Now barely 25, Daniel Keller and Nik Kosmas enjoy exhibition opportunities throughout Europe and the United States, albeit with a more concerted sense of art historical sensitivity, production know-how, and overarching artistic maturity. 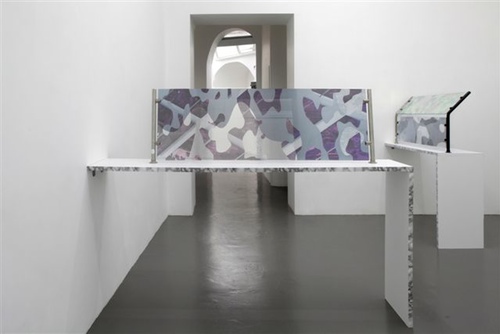 Evidence of this maturation is “Exotic Options,” Aids-3D’s latest exhibition at T293 in Naples, Italy (which I admittedly haven’t seen—a huge criticism faux pas, I know.) The show comprises what first appear to be slick post-minimalist sculptures of stainless steel and glass. But upon closer investigation, the objects reveal themselves to be buffet sneezeguards—that heretofore nameless piece of glass protecting buffet vittles from a patron’s snot—printed upon with images of Keller/Kosmas’ past compositions of solar panel cells. These images are cast in camouflage-like formations and printed upon the sneezeguard glass with “semi-distracting privacy films,” a sort of plastic covering usually applied to windows in public areas to partially obfuscate an onlooker’s view. Here it becomes apparent that Keller/Kosmas somewhat humorously render concern with crowd-controlling devices—the sneezeguards protect us from the inevitable chance ejaculation of spit or snot upon our food; camouflage-patterned privacy films point to a collective desire to be protected from the unwanted gaze of others, a form of public privacy. This seems a sort of easily-digested, legitimate, clear rubric for an exhibition, yet the duo has much more in store. Complicating their position, Keller and Kosmas state, “Acting as both patron and proprietor of an all-you-can eat-buffet, Aids-3D dynamically hedges its positions — deciding, juxtaposing and networking to effectively manage their risk while providing unique works which attempt to satisfy market criteria.” I understand this, roughly, to mean, “As a self-reflexive, somewhat cynical attempt to exist successfully in the contemporary art market, we present to you a ‘smorgasboard’ of aesthetic options in the metaphorical form of the risk-mediating device, the sneezeguard.” Here, the appropriated industrial term “risk” seems to act as a double entrendre, meaning both “to protect the public from health risks from accidentally ejected bodily fluids” referencing the alienating paranoia of contamination in corporate culture, but also “risk” referencing the creation of art works as a “business” of sorts, tapping into and weighing aesthetic options in order to succeed financially in the art world—itself a market exchanging intellectualized luxury goods. 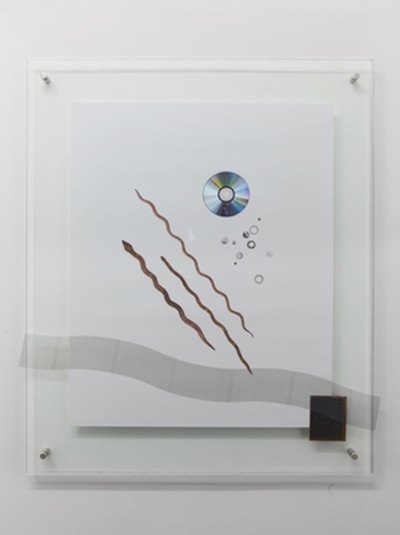 A third, perhaps unnecessary leitmotif penetrates “Exotic Options,” tying the duo’s previous investigations into energy politics. Chromogenic prints containing images of objects referencing various energy stores (such as a spring) and monetary values (the Lobi snake, a form of currency in the African Lobi tribe) are flatly interspersed upon a picture plane with no figure-ground relationship, similar in effect to a color photogram. The corporate practice of shepherding humans in public places, or even the constantly-refining algorithms of e-commerce sites tracking our clicks calculating our taste, seems like an oblique metaphor for the production of art in the international contemporary art world — a carefully calibrated system catering to a studied, market-dictated taste. Through this juxtaposition, Keller and Kosmas underscore the irony that art—which is supposedly meant to enlighten or at least wax upon or serve the contemporary condition of people—may function similar to the less humane aspects of the corporate world. Although the duo may be slightly burdened by a few extraneous esoteric metaphors, it is ultimately satisfying to see Keller and Kosmas not only meet, but through thoughtfulness and rigor, surpass expectations placed upon them by their newfound international recognition. Karen Archey is an art critic and curator living in New York. She edits and writes the ARTINFO blog Image Conscious and pens the column “Moving Up” for bilingual Chinese-English magazine LEAP. Archey has contributed features to MAP Magazine (UK), Flash Art International, Rhizome, ARTINFO, Art & Australia, and Art in America’s online edition.