Fairlight: "The Rolls Royce of synthesizers"
By Rhizome
Fairlight CMI on "This Week" ABC TV

The Register covers the history of Fairlight synthesizers. "An Australian-made music production system based on the Motorola 6800 processor, the Fairlight was - at well over £20,000 – a stupendously pricey piece of kit." Kate Bush and Peter Gabriel were early adopters. The article goes on to put the price in context: 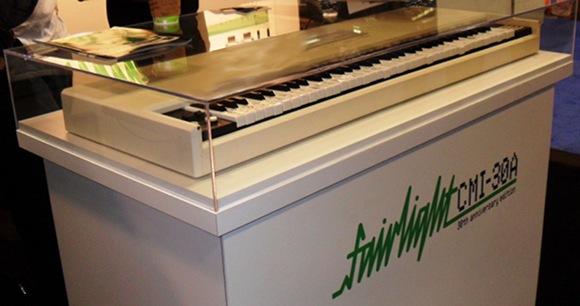 The Fairlight sampled in mono, with a fairly grainy sounding 8 bit resolution and had a bandwidth of around 2100 Hz to 30 kHz. If there’s a mobile phone in your pocket right now, chances are that it can sample better than that. Sampling is now so ubiquitous that we forget how, back when Charles and Di were pledging their everlasting troth, it was a quite amazing trick. Just crudely playing a tune with a sampled dog bark (Wonderdog) was enough to kickstart the dastardly Simon Cowell’s musical career in 1982. By contrast, Gabriel used the Fairlight to evoke exotic ‘world music’ textures and generate skittery sequenced percussion for his ambitious and still very listenable fourth album. The Mark 2 version that Peter Gabriel would have used on tracks such as Shock The Monkey boasted 64 kilobytes of system memory. There was no hard disk. The operating system was loaded on a floppy disk that really was floppy, a big 8” square vinyl job that you could almost bend in half. A second drive enabled the user to load pre-made samples into RAM...

The Fairlight in action: