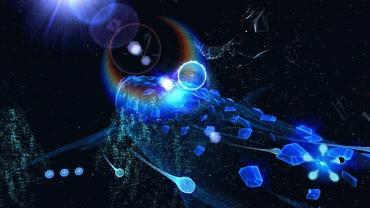 There have been other game designs since that have stimulated those emotionally-charged pleasure centers-–Rock Band comes to mind-–but Rez remains unique in its ambition to create synesthesia as a playable experience. It was the first mainstream art game (and it wasn't that mainstream, as it turned out.) The creators of the game moved on to other things, the studio was merged with other corporate units, and that was that...the game was by no means a hit when it was released. It was recognized by a small circle of aficionados as something quirky, beautiful, and different. In the years since, Rez has captured more mindshare; partly because more people accept the idea of art games, partly because maybe it just took that long for people to discover it and play it. By 2008 there was enough of a movement to convince Microsoft to release Rez HD as a downloadable game for the Xbox 360. It got rave reviews from game critics, but, seriously, it was the exact same game, redone graphically to look pretty in HD. It was the same game, so you didn't get to relive that moment of intense anticipation and discovery of playing it for the first time.

Rez
Pinckard says Children of Eden, released this month for Kinect, was the game she "waited a decade" to play:

I played it for the first time at a friend's house, after a day of barbecue in the sun, accompanied by several excellent glasses of wine. He insisted I put on the headphones. I lifted my right hand to begin. And then I was suddenly falling upward through a liquid field of stars. I don't really know how else to describe it. It was exhilarating, because for the first time in a very long time I felt again that excitement of experiencing something utterly new and strange and beautiful. I started dancing subtly to the beat as I played without even really realizing it.

The first synesthetic/kinesthetic game to reach extreme influence internationally was Dance Dance Revolution.  In Japan, the world's original video game market, many games like this existed - Pop'n Music, ParaParaParadise, VibRibbon, Beatmania and Bemani titles.  Before Guitar Hero and Rockband became American commodities, titles such as Guitaroo Man were old news to consumers of Japanese products.  DDR, however, became recognized worldwide beyond the reach of any of these titles, and lasted through many iterations with consistent sales.
The format for DDR was highly stylized and stimulating, though much more accessible than something like Rez.  While Rez holds interest of the arts crowd, DDR was received with enthusiasm across international market.  I believe there is much more interesting data in the DDR boom than any of the neat periphery titles.

Awwwwesome! Happy to see this here, and first notice of REZ being released for the Xbox. Must buy now.
Another notable art game is the LSD Dream Emulator for Playstation! More screens here.