RECOMMENDED READING: The Dark Side of Metaphor: Fetish in User Interfaces by Alan F. Blackwell
By Joanne McNeil 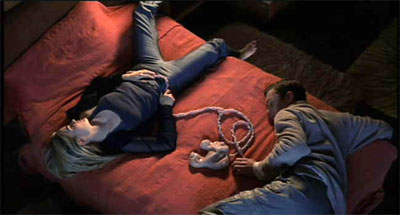 In a recent contribution to a symposium on universal conceptions of humanity [3], I reflected on the way that engineering logic requires the definition of standardised human components, and on the consequent reconception of the human body as a site of interface. I observed that this implicit rhetoric of standardisation (including clinical and technical repair of human interface deficits) is mirrored by an anxiety and adolescent fascination among many technology researchers, with the mechanical function of their own bodies. Whereas those tendencies are obscured and sublimated in HCI research, they become more open to analysis in science fiction, and this paper explores the nature of that critical opportunity.

eXistenZ, as with other films in Cronenberg’s oeuvre, owes much to J G Ballard’s book Crash, itself a gripping elaboration of the man-machine interface. Rather than the idealistic conceptions of Licklider’s human-computer symbiosis, or even the political systems critique of Haraway’s cyborgs, Crash portrays man-machine systems at a level every engineer can understand, not a mystical ‘hybrid of machine and organism’ [3 p.149], but an assemblage of components, with interfaces clearly marked. The point of interface between man and machine is the key concern of the engineer, but is also a site of transgression, to an extent that popular outrage at Cronenberg’s film recognised only deviance and sexual fetish. In the 20th century, the automobile has been the primary site of man-machine interface, emphasised in eXistenZ when the hero has an unlicensed bioport installed by the oil-stained mechanic at a local garage. I anticipate that in the 21st century, the mobile phone could replace the automobile as the most intimate and sexualised site of moral transgression.

— Alan F. Blackwell, Computer Laboratory, University of Cambridge, "The Dark Side of Metaphor: Fetish in User Interfaces" via Tabor Robak

:]
Here is a complementary idea to think about from Blackwell's When Systemizers Meet Empathizers: Universalism and the Prosthetic Imagination from a section titled From augmentation to prosthesis — when engineers romanticize dysfunction.
"…a technical vision originally conceived as an opportunity for human augmentation may shift to one of human prosthesis.
[…]
An extreme prosthetic vision is exhibited through sustained interest in … the field of brain-computer interface research (BCI), where researchers appear to be inspired by science fiction cyborg fantasies of human augmentations such as data storage brain implants or 'jacking-in' to the internet from direct brain connections (in William Gibsonís cyber-punk literature, found in Johnny Mnemonic (1981) and Neuromancer (1984) respectively). For BCI researchers, the ultimate prosthetic target would be a person who has no voluntary muscle movement at all. This frightening condition, known as 'locked-in syndrome' (LIS), has been dramatized in cases such as The Diving Bell and Butterfly.
[…]
Locked-in syndrome provides a medical condition where the user is sufficiently deficient in normal human capabilities to become a well-defined engineering component, able to be connected to a computer via a relatively standardized interface."
INTERDISCIPLINARY SCIENCE REVIEWS, Vol. 35 No. 3–4, 2010 pg. 338

http://www.iversity.org/research_projects/1376/overview - a reference to dark side of the metaphor…but at certain point I have to agree with this thesis: "It would be unthinkable for a film (or art, music or design) student to be as ignorant as HCI researchers about where their ideas had come from." Unfortunately that's the only one I'd support without hesitation.