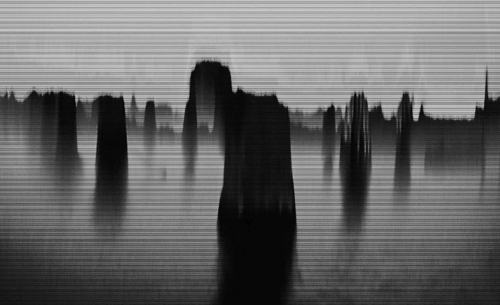 Rosa Menkman meditates on the occurrence and aesthetics of the glitch amidst software and hardware obseletion in her essay Glitch Studies Manifesto. This essay was part of the Institute of Network Culture's second collection of texts titled Video Vortex Reader II that critically explores the shifting dynamics and expanding field of online video. See below for an excerpt, full essay here.

Technological Progress is an Ill-Fated Dogma

In the beginning it was calm... Then humans built technologies and the ﬁrst forms of mechanical noise were born. Since that time, artists migrated from the grain, the scratching and burning of celluloid (A Colour Box by Len Lye, 1937) to the magnetic distortion and scanning lines of the cathode ray tube (as explored by Nam June Paik in MagnetTV in 1965). Subsequently digital noise materialized and artists wandered the planes of phosphor burnin, as Cory Arcangel did so wittily in Panasonic TH-42PWD8UK Plasma Screen Burn, in 2007. With the arrival of LCD (liquid crystal display) technologies, dead pixels were rubbed, bugs were trapped between liquid crystals or plastic displays and violent screen crack LCDperformances took place (of which my favorite is %SCR2, by Jodi / webcrash2800 in 2009). Today artists even surf eBay to buy readymade LCDs with T-con board failure or photo cameras with loose CCD (charged coupled device) chips (the latter I too exploited in The Collapse of PAL, 2010).