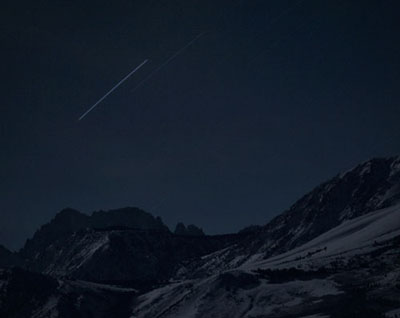 Trevor Paglan, The Other Night Sky

What do you mean, “why?” The answer is, you'd go to Dronepedia  first, and then to DIY Drones , where you'd find out where to get started with a simple kit or pre-made drone.

But suppose you just wanted to find out some of the latest info on the US government's top secret drone projects. Don't even ask me why, it should be obvious. You'd want to do like artist Trevor Paglen , and travel to remote testing locations to snap photographs of strange shapes taking off from military bases, along with the planespotters. Either that, or travel to  Afghanistan, Pakistan, Yemen, Iraq, Libya, and now Somalia  with a good pair of binoculars.

And then if you want a little bit a speculation about drones, you pick up the paranoid defense blogging of Danger Room  or the design-fiction of sousveillance and cyborg specialists like Tim Maly . And then you—

Okay. I thought it was clear, but if you want me to spell it out for you, I will. You are obsessed with drones. We all are. We live in a drone culture, just as we once lived in a car culture. The Northrop-Grumman RQ-4 Global Hawk is your '55 Chevorlet. You just might not know it yet.

I have thirty-five browser tabs open, and each contains a fragment of the drone-mythos. Each is a glimpse at a situation, a bird’s eye view of the terrain. So many channels, showing me the same thing: near-infinite data collection. With the help of Google, I’m drone-spotting—I'm turning a new critical perspective that I'm calling Drone Ethnography, back on itself.

All of us that use the internet are already practicing Drone Ethnography. Look at the features of drone technology: Unmanned Aerial Vehicles (UAV), Geographic Information Systems (GIS), Surveillance, Sousveillance. Networks of collected information, over land and in the sky. Now consider the “consumer” side of tech: mapping programs, location-aware pocket tech, public-sourced media databases, and the apps and algorithms by which we navigate these tools. We already study the world the way a drone sees it: from above, with a dozen unblinking eyes, recording everything with the cold indecision of algorithmic commands honed over time, affecting nothing—except, perhaps, a single, momentary touch, the momentary awareness and synchronicity of a piece of information discovered at precisely the right time. An arc connecting two points like the kiss from an air-to-surface missile. Our technological capacity for watching, recording, collecting, and archiving has never been wider, and has never been more automated. The way we look at the world—our basic ethnographic approach—is mimicking the technology of the drone.

Epistemological change is inevitable, but there is more going on here than a revolution in research tools. There is a feeling I can only describe as the presence of “The Swarm”, a fundamental aesthetic of the drone-mythos. It's an unexpected mythological evolution that has come about along with the technological evolution. There's nothing groundbreaking about myths accompanying new technology. But this mythos is different. The industrial revolution didn't see a burgeoning number of DIY textile mills. This is more along the lines of the birth of the automobile—a seemingly simple invention that not only revolutionized its particular task, but also changed society.

The technological Swarm is distinct category of our cultural fear-set. Since Karel Čapek’s first coinage of the term, the “robot” has always been envisioned as something that would potentially overcome our majestic eagle’s nest at the top of the food chain; by simply not requiring food, they would overwhelm the natural logic from which we have built our culture. These days, it is not the impenetrability of iron or steel, but the vastness of infinity that mocks our existence. The swarm is something that is overpowering to our sense of life. It seethes, flowing like liquid as much as it stratifies like biomass. Its organic totality guides itself with odors and dances, the distributed indices of ants and bees; it feeds on raw data, abstract in its endlessness; its soul is the cold repetition of pattern, rather than gut decision. The swarm is related to these informational indicators that we, the logic brain centers of the universe, have always ignored in favor of solid reasoning, questioning, and conclusion.

As the swarm becomes real before our eyes, the Lovecraftian horror becomes more Orwellian— or perhaps it is the other way around? As our gadgets get smaller, such horrors seems less like fantasy and more like... what? “Real-life?” Nanomachines, flying robots, botnets, and AI. The genre status switches between blockbuster and headline on a weekly basis. It's all a little too real. It's all a little too much. And that surplus, caught in the glinting sunlight off cold, gun-metal gray wings, invisible in the sky above, is the Swarm.

But when the theater lights come up, we reach for our cell phones, not for weapons to fight off Skynet. The technology that gives us the Fear is also technology that does us good. Total Information Awareness  is not just a post-9/11 government agency, but a democratic cause of the Internet. We can’t manage all the information ourselves, and so we need Drone Ethnography to give us an edge. The grasshopper-eye of the swarm is the only way to process it. As Justin Pickard  writes about the quilted world-view of Google Earth, the free public access tool for navigating years of military-grade keyhole spy satellite data, “The digital artifact is not a single text, but a palimpsest derived from multiple satellite photographs – with adjacent images separated by the gulf of years.” Without Google’s distributed servers cranking away in some hidden, darkened dungeon to feed our interfaces, the mass of data would be un-navigable. The mashed-up, stitched-together view is amazing because it is something we never could have seen before, and because now, with all of this information at our disposal, it is all we can see. We love this, and we want more.

And we don’t just want this. We need this. In a humanitarian crisis, the very first data that must be collected is Geographic Information Systems data. We need flyovers, photographs, the most recent maps fed to us with live updates of the topological information that is changing our world right out of our control. The singular telescope of Gallileo has evolved into a bug-eyed drone from Northrop-Grumman. It is no longer a research instrument, but an extension of society. Technology is no longer something that can be banned or controlled. Fear of the Swarm is forever joined to love of the Swarm. As Drone Ethnography has liberated our epistemology, from the popular mindset to high level government actors, the drone-mythos captivates our imaginations. The more we use it, the further we leave the point of no return behind us in the slipstream.

We have learned to love the drone. The only question that remains, is how will we express this love? How did it work with the car? You become a motorhead, and build your own drone from consumer-available technology, like the folks at DIY Drones. Or maybe, like those who snoop out the rumors for coming autoshow concepts and new production models, you go out with the planespotters to see what the government is cooking up in the drone department. Or, you could simply be a user of the drone-influenced technology, riding “shotgun” on Saturday nights, just reaping the benefits of Drone Ethnography's effect on our larger technical sphere. What does the future hold? Next perhaps are drone ballads, riffing off the popular car crash songs like “Leader of the Pack” and “Tell Laura I Love Her”? 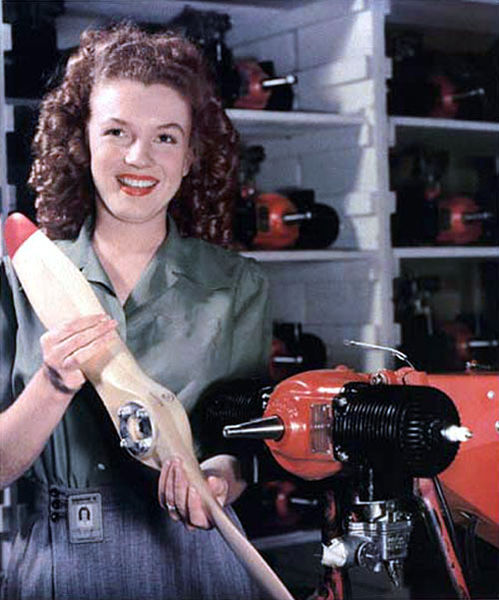 A young technician named Norma Jean at the radioplane factory, modeling the propeller of the QO-2 target drone (via.)

There's a chance that the drone-mythos could simply mimic one of our culture's earlier obsessions. But why should it stop there? Our science-fictional apprehension of the swarm has evolved from fear to love as well. This is new technology, with all-new possible to social, geographic, architectural, and informational applications. We bomb the drones , in a creative terminological reversal once reserved for suburbs. How long will it be before dedicated Wikileaks-drones are out there amongst the swarm, collecting information for the people, the information that either couldn’t or wouldn’t be collected any other way? Drones for advertising, drones for entertainment. Customs agent drones and pizza delivery drones are thinking too small. I'm thinking about fashion drones. An AI-controlled network of swarming personal drones re-assembles itself around you depending on whether you are at a formal or casual event, by reading the environmental cues. Drones for sport? I don't know what the rules will be, but I'd bet they never need an instant replay. Snowboarding used to be only a hobby for the kids, and now it is a Olympic Event. What would the NASCAR of drones look like? What will be the stereotypical fan of a drone-event? No doubt the first architect who embraces drone design will be thought of as an oddity, but later generations will probably think of him or her as that generation's Bucky Fuller. Of course, everyone will remember the year that breakfast cereal drones were released. I shudder to think of what the pharaceutical industry will do with its drones.

It seems as if I'm kidding, but this sort of speculative drone-spotting is dead serious. We're seeing the full fruition of a new way of thinking in Drone Ethnography. The ongoing embrace of this thinking in the popular imagination shows that it is here to stay. Speculation is a fun past-time, and drone-spotting on the Internet is how I get my kicks (and I'm not the only one). But when the time comes that drones and their related technology are entering our society in record numbers, and in ways we never could have imagined, we only will have the limits of our imagination to blame. The Gorgon’s Stare (the name of a recent camera array deployement for military drones ), in classical mythos, was defeated by showing its reflection to itself. I would expect no such simple end for the Swarm.