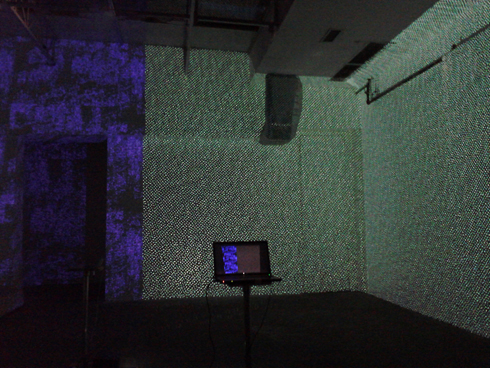 Nicolas Sassoon and Sara Ludy have a deep collective interest in pixelated virtual architecture and are both members of the online art collective Computers Club. Sassoon has an extensive collection of architectural animated gifs on his own site and considers them representatives of an ideal, only achievable in virtual space. Ludy, with a background in interior design, creates videos of catalog-like architecture melting together in saw-toothed fades. Their latest collaboration, WALLPAPERS, reframes their interest in physical space. Up for only one day at 319 Scholes and curated by Lindsay Howard and Katie Miller, Sassoon and Ludy’s installation transforms the location into immersive wall-sized animated gifs.

Their attention to detail and layout of the space coalesced to create a mesmerizing field. Spanning two large walls of the front room, Sassoon’s snowfield drifted upwards surrounded by darkness revealing different patterns of movement at varying distances. This added contrast to Ludy’s well cropped hybrid violet animation that rendered a mixing slow motion waterfall of abstracted texture landing somewhere between moss, leaves, and stone. Pausing for a moment, the landscape revealed itself. Ludy’s image projected onto the doorway connecting to the second room synced perfectly with the existing perpendicular lines of the architecture. Snow was falling up as the viewers walked into a temple entrance cast out of a forgotten 8-bit videogame nightscape.

The technical setup was acutely tuned to the relationship between the images, viewers, and projectors.  Two laptops cropped out of the floor resembling viewing stations for the scene. This intentional placement informed the tremendous scale shift between screen and wall. Viewers walking through the space playfully interrupted projectors beaming their images from floor level below the laptops. Staring closely at an image on one of the laptops made it possible to see the pixelations. Walking close to the wall, however, revealed a serendipitous match between the pixilated screen of the projectors resolution limits and the pixels of the animated gifs themselves. WALLPAPERS effectively wraps the viewers into architecture.

In the second room the pairing of animated gifs was repeated to smooth the transition between the front and back rooms. On the largest wall of the back walls an animated gif with a more traditional engagement of the shows title presented itself. A grid of large greens squares locked together projected from the opposite wall at waist height. Each copied square was an undulating toxically green sea of pixels. In a nearby corner, the grid met Sassoon’s snowfield - casting a gaseous green hue onto field of drifting sequined pixels.

Despite the minimal color palette and seemingly simple setup, Sassoon and Ludy’s projected gifs are captivating and meditative. They are an undeniable extension of Sassoon’s extensive animated gif collection and Ludy’s videos exploring merging planes of colored architecture. The space they created together could easily exist in the same 3D virtual world of their last collaborative piece Headquarters; a 3D model Sassoon created and Ludy sound-tracked as a forever-unrealized hangout for all members of Computer Club. For Sassoon and Ludy, it’s about the ideal. The fantasy of virtual space and the way it affects architecture and our own imagination. Although the technology is directly present in the installation of WALLPAPERS, the show succeeds in transporting the viewer to an ideal location created by the artists shifting the often-haphazard pace of our connections to everything digital to one of slow reflection.

Phased sets of DJs and sound performances layered over the visuals throughout the night. The music added to the atmosphere of the projections and although I couldn’t stay for all the performances, the ambiance was relaxed and friendly and helped make this one-evening show memorable. 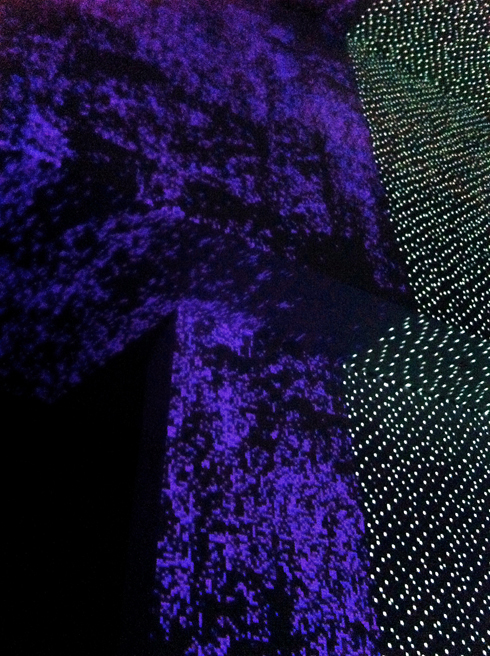 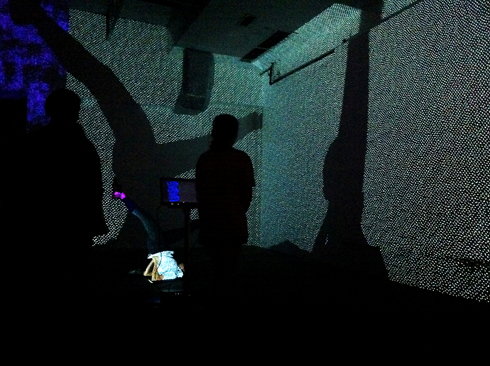 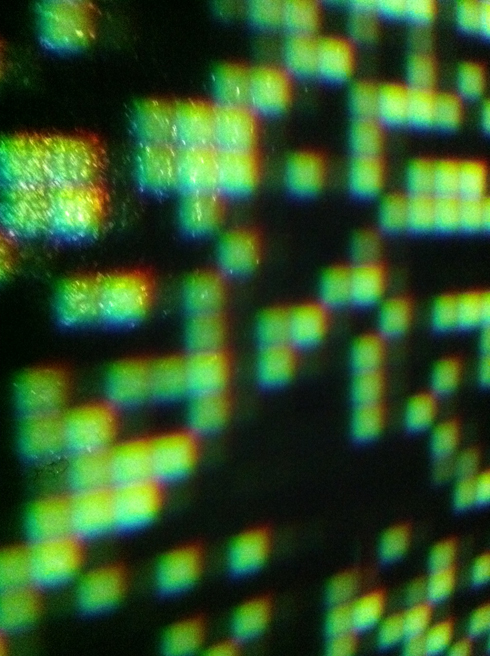 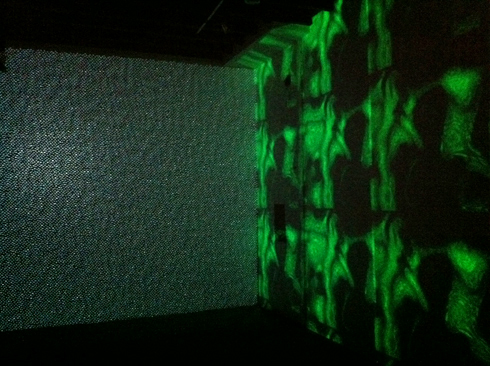