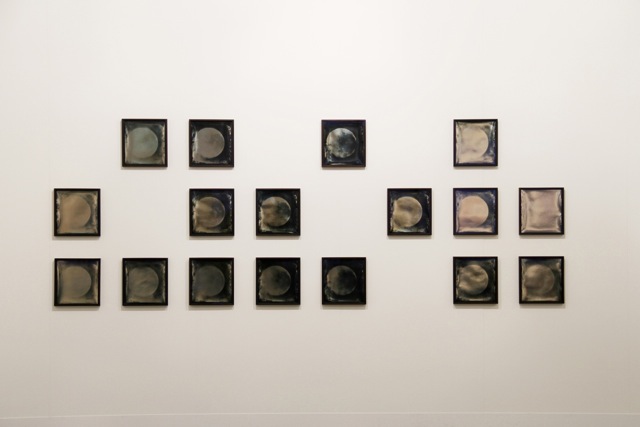 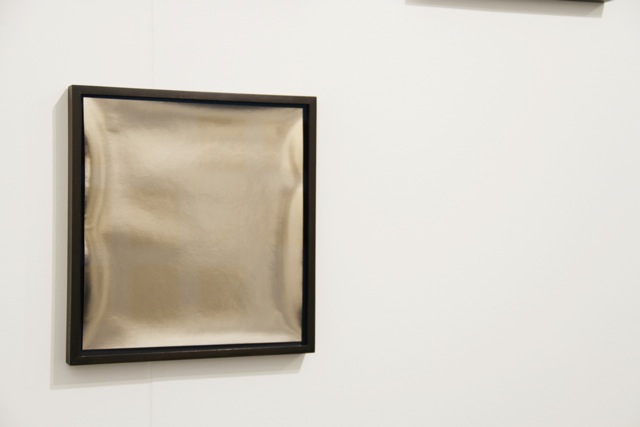 Gold is the element most closely associated with the sun. This connection has been alchemical, visual and metaphorical: The sun as that which produces power, gold it’s symbol. The relationship between photography and gold can be traced to the medium’s roots, in the 1840’s it was used as an alternative to silver as a sensitizing agent. Oppenheim refers to this technique in Heliograms.

An image of the sun from July 8th, 1876 is exposed at different times of day to sunlight, starting at dawn and continuing through dusk, beginning with the vernal equinox and extending through the following months. The intensity and quality of light between hours and between days changes sometimes subtly, sometimes dramatically. There are times of the day when the artist cannot make an exposure, times when life gets in the way. These moments appear as blank spaces on the wall, making physical a fractured temporal experience. Each wall represents the months in which the work was produced, March, April and May 2011. Through the installation of the photograms, Oppenheim thinks about how the physicality of the exhibition space can stand in for these temporal moments, much like the grid of days on a calendar. If much time has passed between a frozen image of the sun in 1876 and Oppenheim's new prints, time runs through the duration of her project. As a picture fades, materially and in memory, it takes on the additional meaning of all the moments between when it was created and when it is viewed or remembered. In Heliograms, Oppenheim points towards these invisible histories by exposing a 19th century photograph of the sun to sunlight over and over again, as if through repetition something unseen can be revealed, illuminating the past with the light of the present.