YouTube Censors Petra Cortright, But 'VVEBCAM' Lives on in the Rhizome ArtBase
By Ben Fino-Radin 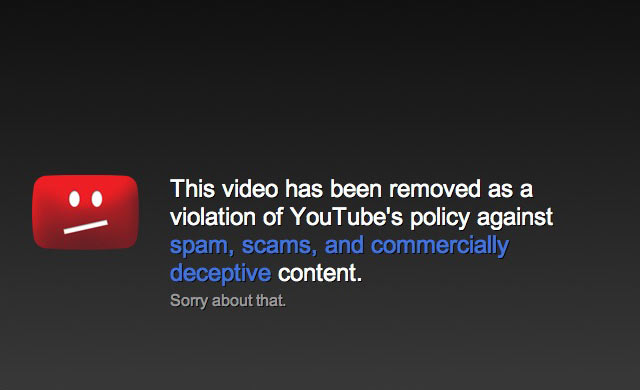 On Saturday December 10th 2011, Petra Cortright received an email stating that a video of hers had been flagged by a member of the YouTube Community. The automatically generated email said that upon review it was verified that the video did indeed violate the terms of the YouTube Community Guidelines and has thus been removed. The video in question, titled "VVEBCAM" was uploaded to YouTube in 2007. It has exhibited internationally, is discussed in several new media and contemporary art texts, and is taught in academic curricula.

Cortright told us over email that she appealed the decision. She explained to YouTube that the video and its contents were part of an original artwork. She referenced interviews that have explained the importance of the use of "spam" in the video's description. Four hours later her appeal was denied, and the video now has ceased to exist on YouTube. The work is also defunct on the artists website, where the video was embedded via YouTube.

Thankfully Rhizome has recently archived VVEBCAM in the ArtBase. We worked with Cortright to create an archival representation of the work as it existed on her site. We have replaced the broken YouTube video with an HTML5 player that references local files and emulates (at least approximately) the look and feel of the original YouTube player.

obvisuoly a lot of ppl care, thats why they written about it..? u fuckin peasant. why u mad bro? takin the time to comment.. suck my dick :P

Daniel, I love you

why u no archive my work its better

Why would the video be removed! I'm too late to see it! AHHH

A barred spiral galaxy is a spiral galaxy with a central bar-shaped structure composed of stars. Bars are found in approximately two-thirds of all spiral galaxies.[1] Bars generally affect both the motions of stars and interstellar gas within spiral galaxies and can affect spiral arms as well.[1]

Not the first or the last time such a thing happened on YouTube. Shame, I also wanted to see the video.