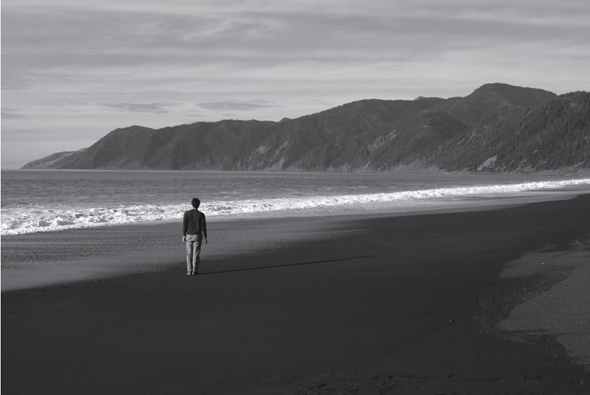 David Horvitz's first solo exhibition in San Francisco opened August 6th at the Adobe Books Backroom Gallery. For the duration of the exhibition Horvitz is guest blogging on the Adobe Books site. He sends frequent updates of images from his daily life and documentation of other projects he's working on - he's also included some posts about the recent hurricane that passed through New York. Since Horvitz has a history of working with ideas of remote connections, temporality, and site-specificity his guest blogging isn't surprising but is a nice compliment to his work in the physical gallery space which also takes on a transience of its own.

Adobe Books Backroom Gallery is pleased to present David Horvitz' first solo exhibition in the Bay Area. Exhibited will be photographs and text that expand on the main ideas of several projects from the last two years. One of these, a project Horvitz first created for a gallery in Den Haag, Holland, has been restaged for the Backroom Gallery. For the original project, Untitled (Flowers), Horvitz spent the day travelling the subway system in Holland gathering flowers from the different flower vendors he encountered. Says the artist, "There was something about a distributed element across the country that was then slowly recollected. Reconcentrated." For the Backroom Gallery, Horvitz purchased red roses from vendors while travelling by car from Oakland to the Mission District of San Francisco, where the gallery is located. The resulting bouquet will be exhibited in the gallery space as a souvenir of his journey across the Bay.

Brooklyn-based David Horvitz's diverse projects utilize the internet (blogs, Twitter, email) and the postal system as tools of connection and expansion. For Public Access, a multi-level project that began in January of this year, and first exhibited at SF Camerawork, he travelled North along the West Coast, photographically documenting his presence at beaches from Mexico to Oregon and posting the images on the locations' corresponding Wikipedia pages.Also on display in the gallery is the work Untitled (Twins), 2011. The artist framed seven pairs of photographs taken of the ocean during the Public Access project. Over the course of the exhibition, one photograph from each pair will be gifted to nearby businesses and other locations, effectively expanding the exhibition to include the community surrounding Adobe Books. In his practice, Horvitz reaches out to the electronic community and far-flung geographical communities as well to build relationships both lasting and fleeting.

Excerpt from Katie Hood Morgan's interview with David Horvitz that accompanies the show as a limited edition print:

David Horvitz: I've done a few other variations of this as well - one in Groningen, Holland, and another in London. But they are always slightly different. Since a lot of my work is not produced in the studio, I find myself making iterations and derivatives of perviously existing works. It would be quite impossible to make a completely new unique work each time. I sometimes feel the demand that I must always make a new unique project. But I can't do that. Instead, I take an idea, and let it shape itself in a new situation. Unlike In Berlin, the piece in Adobe will exhibit both sets of prints - photographs of the Pacific Ocean along California's coast. During the exhibition, you, the curator, will slowly remove one set of prints, and find a place for them in the surrounding community. By the end of the exhibition, if you do your work, there should only be one set of prints remaining. All these photographs were actually shot while doing the Public Access road-trip. So there is an interesting blend of works here. Things spill over. Things find themselves in different projects, etc… Like the sourcing of images, I too can source my own images, and use them for new projects. Though maybe there is no such thing as something new and singular here - everything might just be intertwined, like a mushroom's mycelia, popping up in different places.