As we enter the last weeks of summer, take some time off and check out Tarn and Zach Adams’ Dwarf Fortress, an indie game that has earned a cult following and recently garnered some mainstream profiling including an appearance in MoMA’s Talk to Me exhibition.

Developed over the past decade, Dwarf Fortress promotes depth and complexity of game-mechanics over graphics. As an example of this, amidst its ASCII aesthetics, the game includes its own world generator, economics system, three-dimensional world exploration, fluid dynamics, complex names and languages, and character profiles that allow emotional responses to the world you build around them (i.e. the dwarves can appreciate art, but can also hold a grudge.) The game's complexity generates an equal proportion of difficulty that has subsequently produced a community of dedicated followers who share their stories online, donate to Bay 12 Games (Tarn and Zach’s company), and even suggest improvements on the game’s forums. Foremost, playing Dwarf Fortress requires patience - followed by an appreciation for intricate details hidden in primitive graphics. At one glance it's a scrambled mess; at another, it holds a profound resemblance to our own lives. 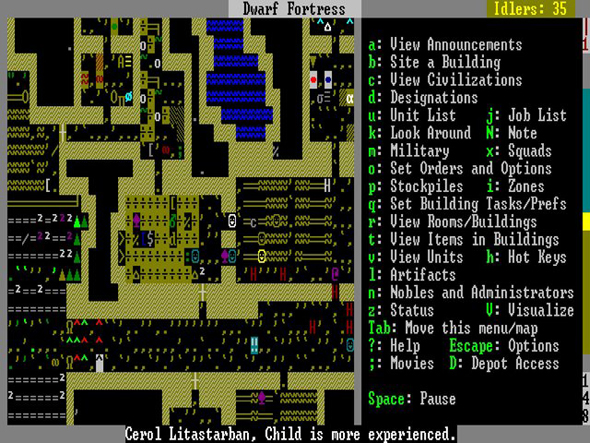 Excerpt from the New York Times' profile on the game and its makers:

This bare-bones aesthetic allows Tarn to focus resources not on graphics but on mechanics, which he values much more. Many simulation games offer players a bag of building blocks, but few dangle a bag as deep, or blocks as small and intricately interlocking, as Dwarf Fortress. Beneath the game’s rudimentary facade is a dizzying array of moving parts, algorithms that model everything from dwarves’ personalities (some are depressive; many appreciate art) to the climate and economic patterns of the simulated world. The story of a fortress’s rise and fall isn’t scripted beforehand — in most games narratives progress along an essentially set path — but, rather, generated on the fly by a multitude of variables. The brothers themselves are often startled by what their game spits out. “We didn’t know that carp were going to eat dwarves,” Zach says. “But we’d written them as carnivorous and roughly the same size as dwarves, so that just happened, and it was great.”

Dwarf Fortress may not look real, but once you’re hooked, it feels vast, enveloping, alive. To control your world, you toggle between multiple menus of text commands; seemingly simple acts like planting crops and forging weapons require involved choices about soil and season and smelting and ores. A micromanager’s dream, the game gleefully blurs the distinction between painstaking labor and creative thrill.