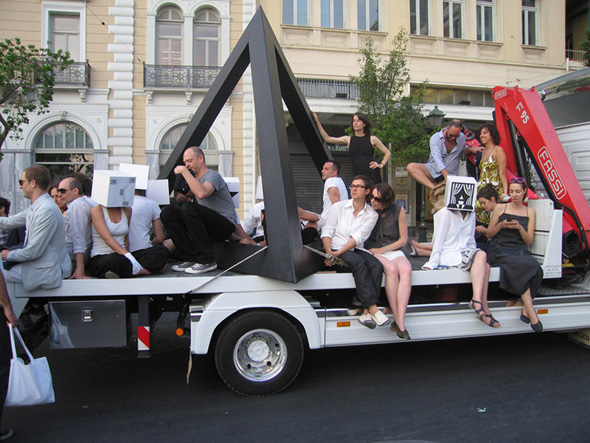 Some of your work exists offline as performances, but the majority of your works are unique websites that present and interactive experience for the viewer. Do you have a preference for exhibiting work online or offline, and have you ever had a title in mind for a work and then had to change it after finding out the domain was owned by someone else?

My priority is to create works that exist online. Having my work online automatically reaches a far greater audience in great speed, creating a powerful social and open condition but I am very much interested in the online-offline interplay. Since the late 90's - when I started creating online, I felt a strong energy and curiosity for the spatial physical outcome of my works. Now we live in the post-internet era and I feel this divided line of the online and offline conditions is almost diminished. This is why extending my pieces beyond the boundaries of a computer screen and present them in physical forms it's a very normal act for me. I am interested in creating an inter-experiential process, a meta-perception of these works but keeping at the same time their internet entity. Regarding exhibiting them in contemporary art spaces I feel are important in terms of historicity but also allows for a moment of sharing the work together with other people in a live space and audience getting a different feedback. The titles of these pieces are their unique domain url's and are registered in the most popular extension which is dotcom. I usually register complex phrases and rarely used, taken from something I read or something I invented like for example, ElectricityComesFromAnotherPlanet.com. So it happened very rare I had to change the title of a domain name due to availability. The title is really important for the piece, it has to be memorable and kind of describing it in a subversive way.

Your websites ride an edge between Surrealism, Formalism, and Eroticism. When you created Monument to Internet Hookups (2009) it seems like all of these themes are coalescing in a mysterious combination of large-scale sculpture, costume, and live performance. Can you explain the concept behind this piece in more detail and possibly relate it to the concepts you explore with your websites?

I treat my websites as places where we can imagine meaning and experience objects, the same way we can admire a sculpture in a public space. So visiting a website can become as public as visiting a traditional monument. I grew up in Athens, a city full of amazing monuments that still loom like ghosts over the city and still engage me with a mixed feeling nostalgia. Sometime ago I read this great essay of artist Robert Smithson called "Entropy and the New Monuments" and somewhere it was saying "[...] If time is a place, then innumerable places are possible" and somehow I got very intrigued by this minimalist prophetic statement which "echoes" very appropriately in our post-internet time. Monument to Internet Hookups is a project that started in Athens in 2009 as an idea to crash both internet and "terrestrial" realities, fight human isolation and at the same time to act as a symbol of glorification of internet communication taking place in a physical space. The first edition was connected with sexuality and human rights as it was a collaboration between the Athens Biennale and Athens Pride.  Its logo is a triangular pyramid, a popular symbol in internet semiotics but also a symbol of gay martyrdom in the Nazi era. In September I will present it at the 3rd Thessaloniki Biennale as part of a traveling itinerary around different cities. It will be installed at the port of the city offering free and open internet, becoming a meeting point for impromptu expression such as performances, discussions or just simply a point for contemplation. I am looking closely at the events in the Middle East, the riots here in Greece and the UK not as much from a political standpoint but from a view of how people use social networks, bypassing every barrier to be organized locally. I hope this Monument will act as a symbol that evokes the dynamics of communication in our hyper-networked 'cosmopolis' colonizing offline space emulating this collective, positive internet spirit.

Once in a Thousand Years is a beautiful, cryptic, and colorful interactive diagram. Many of your other works possess a similarly cryptic relationship between geometric and anthropomorphic forms. The title of the pieces offer a clue that points towards an interpretation for the viewer and often charges the simple forms with loaded context or poetic metaphor. What is your typical process for creating new work and where do you find inspiration?

I find inspiration from everywhere, from books to the vast landscape of online information, from my unconscious utopia to everyday reality... reading, browsing, escaping, dreaming, psychoanalyzing... all combined and vice versa.  My working process is multi disciplinary and hybrid. It's exciting bringing together philosophy and poetry for the titles combined with animation resulting from code I create or I find in open-source sites, which are based on math or physics.  At the same time these are visualized with drawing techniques inspired by basic ancient, modern or post/modern design layered with self-made sound effects. In addition a smooth and sensitive process for making these pieces interactive is fine-tuned with all the above. For those who are more curious to look into and use these through this process they can find the open-source code of many of my pieces available here.

The Angelo Foundation is an ambitious and intriguing project. With your collaborators you organize activities for sound meditation and exhibitions in physical spaces, but also have a small virtual city assembled online and even created your own currency. Can you describe what the icon of the foundation means and what the organization’s plans are for the future?

The Angelo Foundation (2007) is a project that introduces new ideological and semiotic strategies. The logo is an empty head, which signifies an open mind. It’s an open, apolitical organisation whose main focus is to introduce new rules in artistic, educational and authority structures. The activities are presented with different collective actions, ranging from the erection of monuments to poetry readings to ongoing charities like the invention of "The Angelo" currency, which was established in 2008 for physical vs emotional transactions. The slogan is “We give you Money, We want your Love”. It’s like a Trojan horse - it sabotages our relationship with conventional money, which is unavoidable in this day and age. Then they are organized competitions, miscellaneous consulting sessions, cycles of schools like for example the recent The Angelo Foundation School of Music which will operate until the end of August in the National Museum of Contemporary Art. The museum is located in the perfect context, temporarily hosted at the Athens Conservatory and next to the Aristotle's ancient school. I found this a great opportunity to present ideas on knowledge randomisation and self-improvised education. It's a meta-school. In the workshops attendees "taught" how to create random poetry, produce music and meditate through it using a number of tools ranging from websites to open-source software. I invited guest-instructors such as meditators, actors and even skateboarders. Free will and collective gestures are the driving force for all the projects of the foundation so I plan in the near future to erect more monuments, make more schools and give more money either by invitation or guerrilla style. 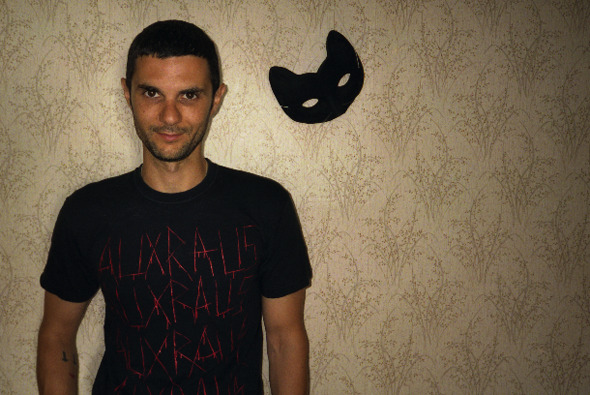 Describe your experience with the tools you use. How did you start using them?
I love "playing" with open-source scripts or with scripts I create with my assistant-coder in Slovakia. In the late 90's people I found out from different sites and friends from chat rooms suggested me different tools, cool software and libraries. At that time I was discovering a very interesting internet subculture. I am still inspired. People in the art world are getting closer more and more to this process of working...

Where did you go to school? What did you study?
I went to a technical school of design and I worked briefly as an industrial designer. Regarding my art education, I am self-taught. I think art schools are OK to educate you in art history but they still teach you how to copy existing techniques. Eventually I don't mind that I bypassed this because at that time I was interested in internet stuff which were not taught in art schools. Since information is available I got my art history education from unbiased sources online but also following closely everything wherever I was travelling.

What traditional media do you use, if any?  Do you think your work with traditional media relates to your work with technology?
I use handcrafted techniques such as paper collage sometimes. This resulted spontaneously once when I printed out some stills from my websites and cut them out making some sort of copy-paste, emulating actions used in Flash like onion tweening or classic motion tweens. Then it depends on the projects, sometimes I also use paint for some murals.

Are you involved in other creative or social activities (i.e. music, writing, activism, community organizing)?
Yes, I do twittering. If you consider this somehow a means of light activism and social activity. I mainly follow and tweet stuff on politics, human rights and online activism.

What do you do for a living? Do you think your job relates to your art practice in a significant way?
I have been doing some design work for clients until a couple of years ago but now I make my living with selling my art through galleries, getting commissions, doing lectures and workshops etc.

Who are your key artistic influences?
Aesthetically ancient Greece, early Bauhaus and post modernism. As a philosophy I feel Andy Warhol was a pre-internet internet hero. His ideas and thinking are still so contemporary. I am sure if he was still alive he would create works online and be tweeting all the time about everything.

Have you collaborated with anyone in the art community on a project? With whom, and on what?
Yes I have been collaborating with my long-time partner architect and artist Andreas Angelidakis for different projects. We made the Angelo Foundation Headquarters together- an ongoing online project building up on Andreas' architectural ideas situations and concepts and vice versa. Years ago I was involved with the Neen idea and recently I organized a couple of BYOB shows in Athens and Bonn that artist Rafaël Rozendaal initiated.

Do you actively study art history?
Yes I read a lot. I also collect rare editions -my only shopping extravaganza. Most recently I found an Italian old edition of the lesser known surrealist Victor Brauner. Super amazing. When I went to Bonn recently I spend most of the time looking and scanning rare books in the library of the art history department at Bonn University.

Do you read art criticism, philosophy, or critical theory? If so, which authors inspire you?
I am inspired very much by Jean Baudrillard's book "Simulations" which is a very important book. I read Slavoj Zizek, I like Boris Groys' essays, I still like Bourriaud - occasionally I re-read Plato and many more. I also like reading essays written by artists themselves. For example Robert Smithson and Lucio Fontana were writing great texts.

Are there any issues around the production of, or the display/exhibition of new media art that you are concerned about?
Generally speaking I am concerned with censorship and control of the information flow over the internet. Even in the so-called democratic societies in the West new laws are being imposed on distribution and copyright. I hope the internet will always remain a space of freedom, a basic rule for any artistic production!