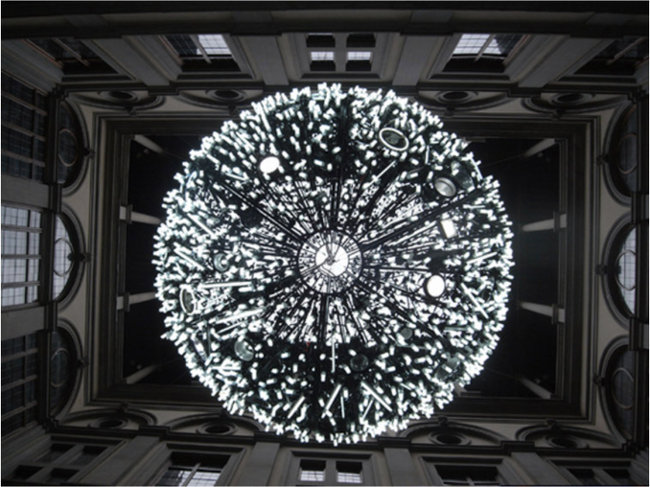 From the New York Times, a look at “Translife,” "a cutting-edge International Triennial of New Media Art that purports to ring the death knell for 'representational' art, questions the very notion of life as we know it, and posits our collective entry into a 'post-human era.'” (More images and a write up by An Xiao on Hyperallergic.)

From the NYT review:

The diverse works on display are connected by their use of digital technology, boundary-crossing nature, collective creation process and the implicit assumption that our world has fundamentally transformed — in ways we are barely beginning to grasp.

“The time-space relationship is changed, or our perception of it,” Mr. Zhang said. “When we talk about time, it is multiple times now. Distance has disappeared because of the network.”

This point is made at the outset by the “Weather Tunnel” installation that stands in the museum’s courtyard. Designed by the architect Ma Yansong, the shimmering white tunnel contains weather-themed works by young artists from universities in China, the United States, Europe and Australia that draw on the same, real-time climatic data from around the globe. (Data is transmitted by custom-made sensors based on those created by Joe Saavedra, an adjunct professor at Parsons, for a project called Citizen Sensor.)

Inside the tunnel, which was uncomfortably hot in Beijing’s blistering summer, a visitor can look through a “Solar Wind Periscope” (Jonas Hansen and Lasse Scherffig) at a visualization of extraterrestrial weather conditions based on information conveyed by radio signals; press a button on the “Weather Inflections” suitcase (Joel Louie, Jan L. Andruszkiewicz, Bryan J. Mather, Kevin Raxworthy, Julian Stadon and Paul Thomas) to hear a sensory-crossing sonification of weather conditions in various global cities; and even listen to an “Electromechanical Solenoid Orchestra & Weather Ensemble” (Benjamin Bacon and Joe Saavedra) that plays surprisingly music composed in real time based on data from the sensors.

Humanity’s evolving relationship with the virtual world is explored in depth.

“New Media Art concerns itself with life in its many different manifestations — not only human, but a shared symbiosis,” Mr. Zhang said. “How do you define life? Is a computer alive? The ultimate goal is to question the anthropocentric, human-centered world view.”

http://www.emvergeoning.com/?p=6472#comment-381086
While it was customary for Buddhist works to be written in Chinese, Dōgen often wrote in Japanese http://www.youtube.com/watch?v=sfR_HWMzgyc