Required Reading: After the Screen: Array Aesthetics and Transmateriality by Mitchell Whitelaw
By Ceci Moss

For all the diversity of the contemporary media ecology - network, broadcast, games, mobile - one technical form is entirely dominant. Screens are everywhere, at every scale, in every context. As well as the archetypal "big" and "small" screens of cinema and television we are now familiar with pocket- and book-sized screens, public screens as advertising or signage, urban screens at architectural scales. As satirical news site The Onion observes, we "spend the vast majority of each day staring at, interacting with, and deriving satisfaction from glowing rectangles."

Formally and technically these screens vary - in size and aspect ratio, display technology, spatiotemporal limits, and so on. They are united however in two basic attributes, which are something like the contract of the screen. First, the screen operates as a mediating substrate for its content - the screen itself recedes in favor of its hosted image. The screen is self-effacing (though never of course absent or invisible). This tendency is clearly evident in screen design and technology; we prize screens that are slight and bright - those that best make themselves disappear. Apple's "Retina" display technology claims to have passed an important perceptual threshold of self-effacement, attaining a spatial density so high that individual pixels are indistinguishable to the naked eye (below - image Bryan Jones). 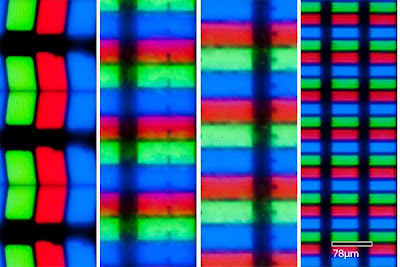 The second key attribute of contemporary digital screens is their tendency to generality. The self-effacing substrate of the screen is increasingly a general-purpose substrate - unlinked to any specific content type; equally capable of displaying anything - text, image, web site, video, or word-processor. This attribute is coupled of course to the generality of networked computing; since the era of multimedia the computer screen has led the way in modeling itself as a container for anything (just as the computer models itself a "machine for anything"). The past decade has simply seen this general-purpose container proliferate across scales and contexts, ushering us into the era of glowing rectangles.

However over the past decade in design and the media arts, a wave of practice has appeared which as this paper will argue, resists the dominance of the glowing rectangle. Given the near-total cultural saturation of the screen, this is unsurprising, given the ongoing cultural dance of fringe and mainstream in which this practice participates. This is not simply a story of resistance however. In proposing and describing two particular strains of "post-screen" practice, this paper aims firstly to outline the shared terms of their relationship with the screen, and in the process develop a more detailed sense of these conceptual devices of generality, outlined above, and its opposite, specificity. Secondly, and more briefly, it outlines a theorisation of this practice, invoking transmateriality, an account of the paradoxical materiality of (especially digital) media, and Gumbrecht's notion of presence.

-- EXCERPT FROM "AFTER THE SCREEN: ARRAY AESTHETICS AND TRANSMATERIALITY" BY MITCHELL WHITELAW

[Note: Whitelaw explored some of the ideas in this paper previously in his "Right Here, Right Now - HC Gilje's Networks of Specificity" republished in Rhizome News on December 20, 2009]