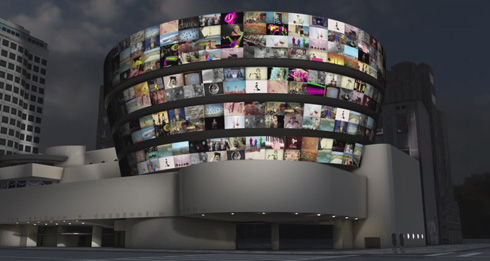 YouTube Play, the biennial of creative video organized by the Guggenheim, YouTube, and HP, has been up for awhile, but tonight from 8-9:30pm the Guggenheim Museum in New York will host an event celebrating the project. The top videos, selected by an eclectic jury ranging from the likes of Laurie Anderson to Ryan McGinley, will be projected on the facade and in the interior rotunda, and there will live performances by OK Go, Kutman, LXD, Megan Washington and Mike Relm. If you can't make it in person, there will be a live stream as well.

Note: Next month on November 10th, we will run an essay by Saskia Korsten on one of the YouTube Play selections, Evelien Lohbeck's noteboek (2008), which will discuss the work as it relates to Korsten's concept of "reversed remediation."