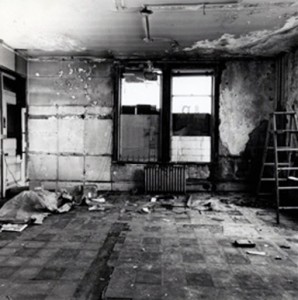 This just in: Lower East Side gallery Ludlow 38 will organize an exhibit of sound artist Maryanne Amacher's City-Links (1967-1981), an early networked sound installation. You can read more about the original project below, show opens on October 20th.

Ludlow 38 is pleased to present the exhibition Maryanne Amacher: City-Links. Between 1967 and 1981 the pioneering sound artist produced 22 City-Links projects in total, connecting distant microphones to installations and performances using dedicated FM-quality analog phone lines. Areas of downtown Buffalo, MIT, Boston Harbor, the Mississippi River, the New York harbor, studios in various locations, and other sites in the USA and abroad were transported, sometimes integrating performers near the microphones (such as John Cage and George Lewis for City-Links #18 performed at The Kitchen in 1979). The exhibition at Ludlow 38 brings together a number of documents, images and sound samples selected and reproduced from the nascent Amacher Archive as a first look at this important series of early telematic art works about which little has been published.

Maryanne Amacher wrote about her City-Links series: In my first sound works I developed the idea of sonic telepresence, introducing the use of telecommunication in sound installations. In the telelink installations "CITY-LINKS" #1-22 (1967- ) the sounds from one or more remote environment (in a city, or in several cities) are transmitted “live” to the exhibition space, as an ongoing sonic environment. I produce the "CITY-LINKS" installations using real-time telelinks to transmit the sound from microphones I place in the selected environments, spatializing these works with many different sonic environments: harbors, steel mills, stone towers, flour mills, factories, silos, airports, rivers, open fields, utility companies, and with musicians "on location." The adventure is in receiving live sonic spaces from more than one location at the same time - the tower, the ocean, the abandoned mill. Remote sound environments enter our local spaces and become part of our rooms. Installations of "CITY-LINKS" include works created for solo and group shows at the Museum of Contemporary Art, Chicago (1974); Walker Arts Center "Projected Images," Minneapolis (1974); Hayden Gallery MIT, "Interventions In Landscape," Cambridge, Mass (1975); Institute of Contemporary Art, Boston, Mass. (1975); Corps de Garde, Groningen, Holland (1978); the Kitchen Center, NYC (1979); Radio France Musique (1976); Mills College (1980 & 1994).