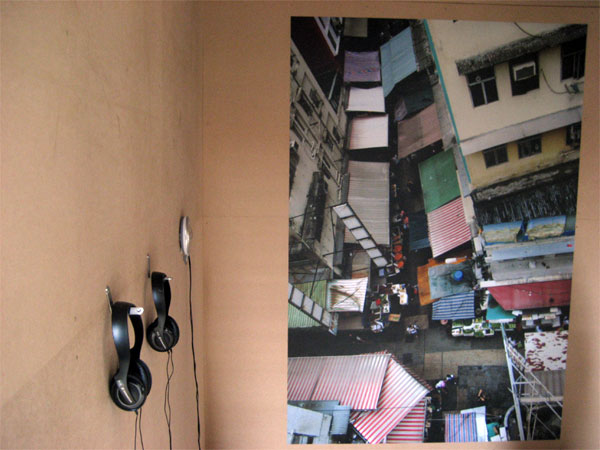 Hong Kong's Para/Site Art Space, who host exhibitions, screenings, talks and events, had a small group exhibition in their space. One of the works was a warm, enveloping sound piece Back into the Ether by Cedric Maridet which I listened to for awhile. The photo in the background, above, is also by Maridet.

Cedric Maridet emailed me a description of Back into the Ether, from the exhibition "Cities of Desire" at the Hong Kong Arts Centre and at the IG Bildende Kunst in Vienna. I've copied and pasted it below, for those who might be curious about it. Also, you can listen to the work by visiting Cedric's website: http://www.moneme.com/ Click "Works" and "Back into the Ether".

Among the various ways to study a sonorous environment, an ethnographical approach allows to focus on the way
habitat and urbanism is being re-appropriated by individuals or communities. As Michel De Certeau exposed in The
Practice of Everyday Life1, structures of power (political or economical) create space through urban planning for
instance, in within inhabitants create space for themselves through their practices, and “tactics”. Urbanism and
social practices interact in order to define a new territory, a new area of life, centered on its inhabitants. This sound
work deals with the aural spatial practice of culture in a context or massive urban renewal projects in Hong Kong.

The sounds recorded in Hong Kong’s Central Wet Market, reflect the everyday practices of a community, its own
social ties, and cultural codes, and its particular production of space in Lefebvre’s terms2. In this context, voices are
primary formal elements: People yelling in the street trying to attract attention of the crowd, trying to make
themselves heard, negotiating with each others, and so on. Other manifestations of human activities can be heard
through other sort of noises of these busy streets. Participants are not only creating the soundscape, but they are
interacting with it through their listening acts, with most certainly a communication purpose; merchants' yells echo
each others, creating “a feedback loop between human activity and our material surroundings3” (p.29)
This sound composition can be taken as a metaphor for the risk of dislocation of the social fabric and micro-level
cultural codes through the idea of disappearing sound. Urban renewal projects do not only affect the architectural
physical space, but also the sounds themselves that used to resonate through the space. This work takes roots in
the soundscape from the outdoor market in Central Hong Kong, and the listener embarks into the noisy streets
among stalls of fishes and vegetables. The sounds are moved around the listener’s head thus defining a constantly
evolving and unstable space for the listener.

The recorded sounds evolve from anecdotal sounds to more and more transformed sounds. The processes
involved in their transformations are real-time spectral effects. They imply is a shift from the common time domain
representation of sound, where amplitudes of sound are counted over time to a frequency domain, where the
different frequencies are evaluated over time. The way the sonorous data is processed in the frequency domain is
ruled by a particular algorithm referred to as the Fast Fourier transform. It is an equation that allows spectral
conversion of the raw sound then temporal reconversion for its normal playback. The first step deals with
calculations of the numbers series of numbers representing the strength of the frequency component at a variety
of points. Diverse processes can then be operated at this stage upon the frequency constituent of the sound, such
as selection of particular frequencies or range of frequencies, ‘freezing’ the sound on particular frequencies, etc. In
order to be heard back, these numbers have to be reconverted into the temporal scale.

In this work, voices become blurry, frozen-like, thanks to these spectral processes. Their original richness and variety
are reduced to drones, as being the mere traces of the initial sounds. However, all the sound frequencies present
throughout the piece are constituted by the original sounds from the market. Hence these sounds are slowly
thinning, freezing into this disappearing process of voices.