Mute at its Meatiest
Proud to be Flesh: A Mute Magazine Anthology of Cultural Politics after the Net
By Charlotte Frost 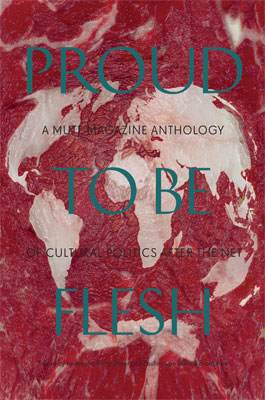 Cover of Proud to be Flesh: A Mute Magazine Anthology of Cultural Politics after the Net

In 2009 the editorial team at Mute (in association with Autonomedia) published a collection of past magazine content under the title Proud to be Flesh: A Mute Magazine Anthology of Cultural Politics after the Net. It was an exercise in content curation, but not, as they point out, an attempt to assemble a greatest hits album. Rather, it reorganises a body of Mute’s diverse output around a selection of themes that are perhaps more apparent (up to) fifteen years later.

In many respects - through the early newspapers, magazines, websites and recent print-on-demand journals - Mute has long engaged in providing content navigation systems for internet-inspired knowledge and the darker side thereof. And they have been doing so in an era defined by its obsession with charting and re-charting the information landscape. What Proud to be Flesh does, therefore, is offer up yet another entry portal to Mute’s rich and important net-knowledge while, in its very book-i-ness, commenting on the current upheaval in text interface products. 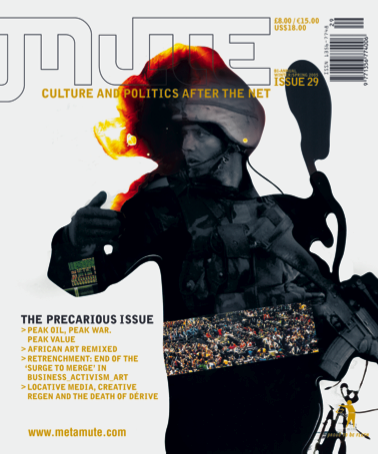 Indeed, that this archive is presented as a book (both hardback and paperback versions are available as well as a companion book: Mute Magazine Graphic Design, from 2008) symbols more than the fever pitch of the e-age publishing debate - although this is of course an area in which the Mute team has form (see OpenMute, their Print-On-Demand contributions and the - in development - Progressive Publishing System). The fact this particular information interface is a big, weighty block of paper pages (and not web pages, for example) points directly to a theme that has run throughout Mute’s coverage of e-politics (as well as the title of the anthology itself, which is Mute’s regular tagline): a critique of post humanist thinking. Current Mute editor Josephine Berry Slater explains:

“Printed on the Financial Times’ own press [Pauline van Mourik Broekman and Simon Worthington] spliced the austere conventions of 18th century newsprint typography with vector-based computer graphics, wacky fonts and articles on digital art and post-humanism. This retro-futurist gesture of covering the ‘information super-highway’ and its cultures on now historical newsprint was an unexpectedly popular bit of hype deflation. Mute’s ‘Proud to be Flesh’ slogan fired another salvo at the Cartesian/Gibsonian fantasy of ‘jacking into’ cyberspace and leaving the ‘meat’ behind. The spectres of pink paper and flesh were wielded against the rising crescendo of cybermania which would climax in the dotcom bubble of the late-‘90s.” p.16

It is therefore no surprise to discover a chapter of the book entitled: ‘I, Cyborg: Reinventing the Human’ - or that this topic is handled well, here, by the likes of Irina Aristarkova, Maria Fernandez and Suhail Malik, for example.

Beyond this, the nine chapters or categories of content commentate on post-web politics, creativity and economies, with an eye for the disenfranchised and very un-revolutionary aspects of the so-called ‘digital revolution’. Chapters cover ideas of democracy (and the lack-there-of) from web 1.0-version 2; online art, its conceptual cousins and confrontation of commerce; organisational structures and post-authorial collaboration; refracted class divides and the ley lines of online law. If you’ve been reading Mute for the last fifteen years, some of these articles will be very familiar to you: ‘The Californian Ideology’ by Richard Barbrook and Andy Cameron; ‘The Right Connections: Tea with Kevin Kelly’ by J.J.King; ‘Is It a Commercial? Nooo...Is It Spam?...Nooo-It’s Net Art!’ by Josephine Bosma and so on...

The strongest criticism one could make, given that this, in so many ways, is a landmark publication (which should be standard issue at the very least on all digital art and design courses), is that it might actually be several books disguised as one. Value for money notwithstanding, the breadth of Mute’s canvas is a little overwhelming and I wonder if it is almost too diverse - to live life as a book that is. But certainly, this makes it a meaty reference tome for jogging your cultural memory or installing one in the first place. And of particular benefit to newcomers are Berry Slater’s introductions to each chapter which outline some of the constituent ideas, not to mention her short account of the history of the magazine, which puts the book’s content in some much needed context. 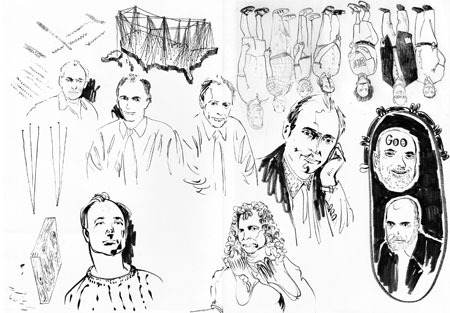 Illustration by Theo Michael, from Volume 2, #8

One article that stands out as particularly atmospheric, conjuring up so much of Mute’s early backdrop of ‘90s culture is ‘Bill Posters is Guilty: On the Cultural Logic of Ambient’, by Neil Mulholland, from 2002. He describes this genre of ‘politics by osmosis’:

“As a vague audio representation of the global eco-politics, ambient music gained an authoritative hold amongst anyone who wanted to buy into New Age. Ambient was a polite, well-dressed native who might go unnoticed. It was therapeutic, domesticated and at peace with its surroundings, and hence a favourite of anyone who wanted to present themselves as ‘political, but not in a barricades sense’...It was made for the ‘90s, a decade in which people increasingly expressed their political beliefs through what they consumed while concurrently being uncomfortably with consumerism.” pp.317-318

He then swiftly encounters Marc Augé, pseudo-ambient art and the ‘oxymoronic politics’ of Naomi Klein’s No Logo, all in the same essay (and one can’t help feel his notion of ‘ambicommerce’ comes very close to identifying the late ‘00s culture of ambient credit). It’s a media theory mash-up, with a side of Marxism, and as such is the very essence of Mute.

It is this historical aspect that is defining of the book as a whole. There is a warp and weft to each chapter as the themes cut one way, while the chronological organization of content cuts the other, each time giving a mini-history of Mute’s editorial evolution. The book truly conveys the critical fabric woven of intense ideas in an era of intense ITC innovation. Thus, quite apart from reorganizing and reiterating the central debates that have signified Mute’s theoretical contribution, what this book does by way of representing a view of Mute’s archive and/or the last fifteen years of ‘cultural politics after the net’, is remind us of its own multifarious form-taking.

And there’s a great note of the synecdoche about that.