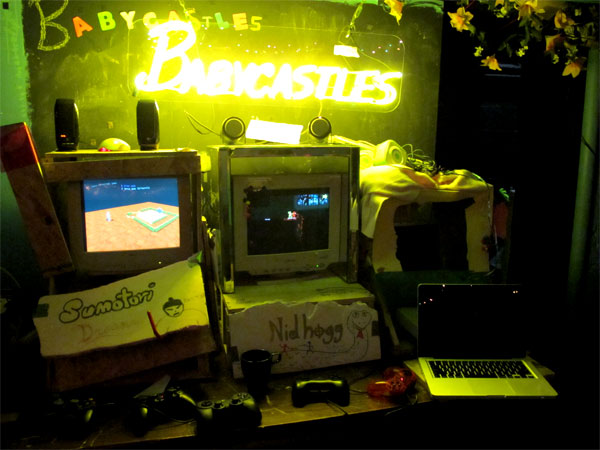 The setup downstairs at the Silent Barn.

Yesterday Ceci and I went out to Silent Barn in Ridgewood to meet with Kunal Gupta and the other guys who run Babycastles. Babycastles is a DIY arcade space with a rotating set of independent games curated by local artists and game designers. The space is usually set up for play during shows at Silent Barn, but they'll turn the machines on and let you play if you come by any time they're around. 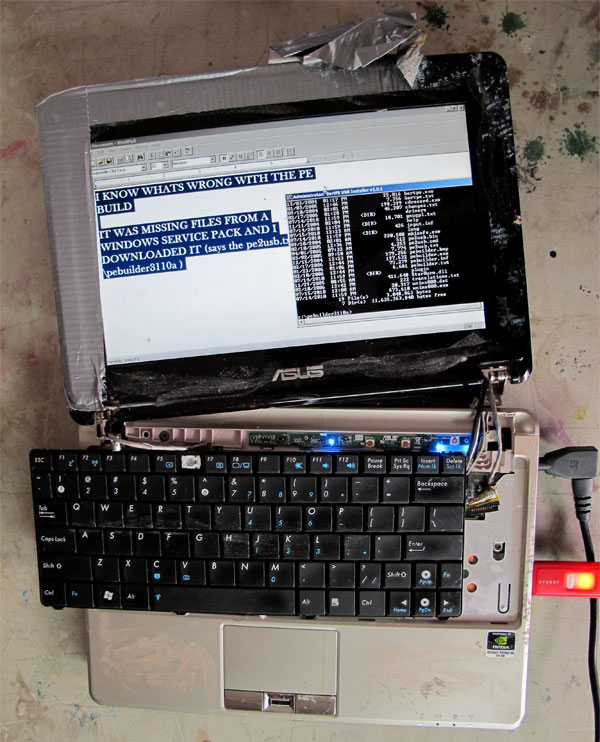 When we arrived, the guys were prepping for a big "Indie Game Cosplay Music Video Shoot Machinima" performance/dance party with CHERYL that they are throwing this Saturday, part of Game Play at the Brick Theater. Upstairs they were disassembling old laptops so that could be attached to the costumes of cyborg dancers that would double as playable arcade games. While they tinkered with soldering guns and laptop guts we played a few rounds of Tristan Perich's 1-bit game KILL JET on a small portable TV about the size of a car battery. The game is operated using two buttons, one to move the plane up and the other to move it down. For previous installations the game was played on a larger TV with the buttons attached to the back, so that the player had to hug the screen in order to play. Kunal showed us some of their costumes in progress and discussed some ideas for interactive dancing machinima gifs before we headed downstairs to see the arcade. 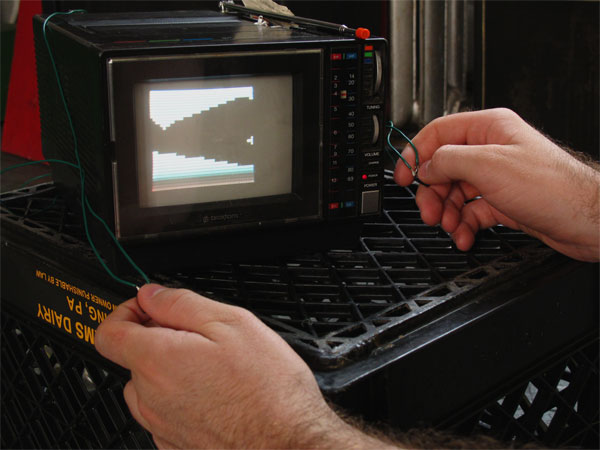 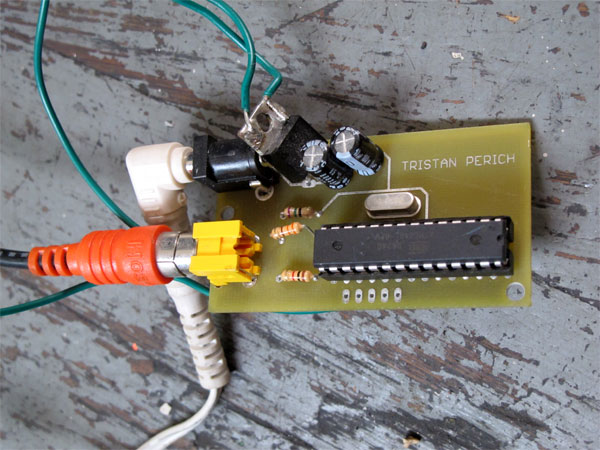 Glamour shot of Tristan's circuit board for KILL JET

The current series of games on display at Babycastles is curated by Zen Albatross and titled "A Duel", as each game interprets the concept of the duel and player vs player gameplay in a different way. 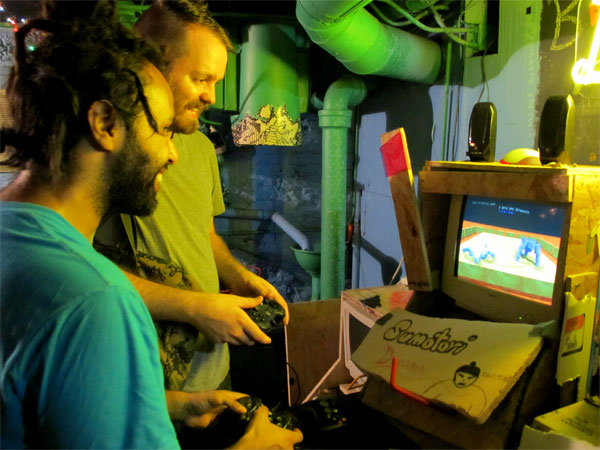 Sumotori Dreams is a ragdoll sumo wrestling game from Hungary in which fights generally end with each player crumpling into a pile of polygons on the ground or falling down a flight of stairs. At Silent Barn events people sometimes use the wrestlers to flail and mosh to the music. 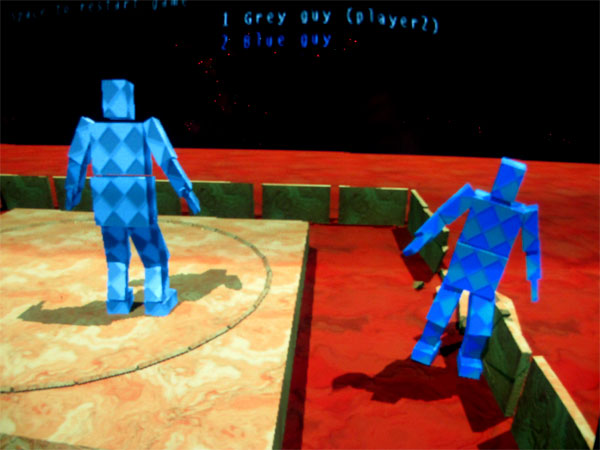 About to take a spill in Sumotori Dreams.

Nidhogg is a swordfighting game from Mark Essen in which players can battle each other or slice through a stream of red and yellow fighters before being whisked off by a massive flying worm. The game's soundtrack was created by Bushwick artist GDFX and was originally commissioned for the NYU Game Center's "No Quarter" exhibition. 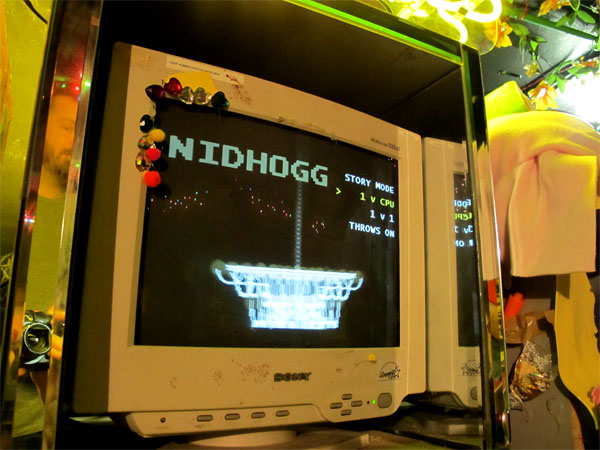 The title screen for Mark Essen's Nidhogg.
Video of Nidhogg

The third game on display we didn't get a chance to see since it needed to be played off an NES cartridge. Instead we looked at Detective Geronimo Therapy Session by Ivan Safrin in which a giant floating head tells you to "Take these pills" and then yells at you for not listening to his advice. The game was created in only a few hours specifically for a Babycastles show. 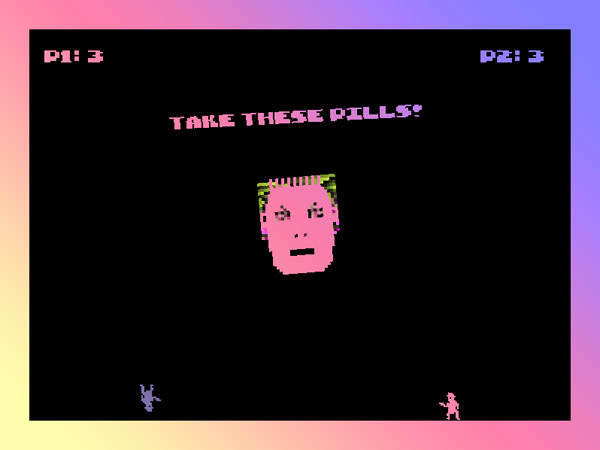 Each game is wildly different from the others and shows the wide range of games being produced by the indie scene. The games are also from all over the world and are given a popular interactive venue thanks to Silent Barn and Babycastles.

Previous exhibitions at Babycastles have had even more abstract themes, such as the "Games That Will Make You Cry" series, by Arthur Ward, Jr. of NYU-Poly, in which each game was intended to frustrate, depress, or sadden the player in some way. 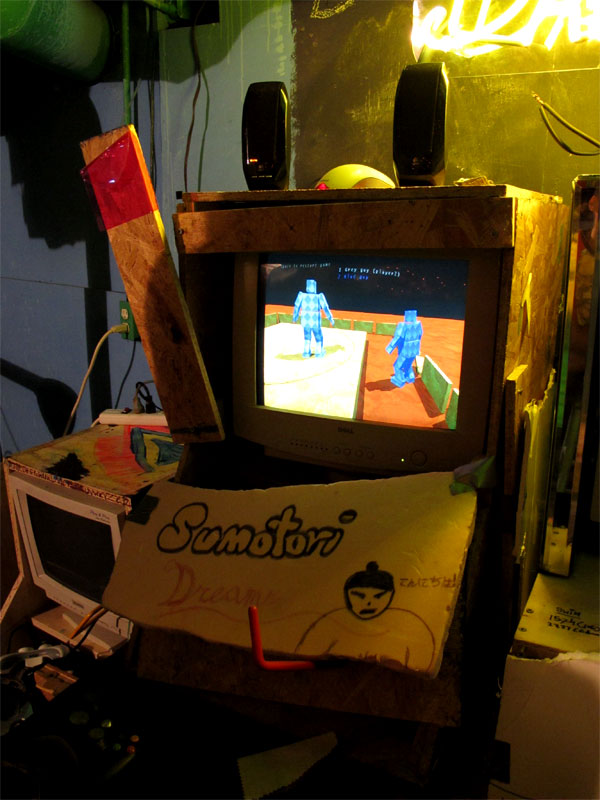 The DIY case for Sumatori Dreams.

Kunal and I talked about why the indie game scene in New York was so important to him, and why he chose to create the Babycastles arcade space. In an age when videogames are more popular than ever, the industry has become increasingly corporatized, making it more and more common for games to be created by massive teams of developers at a cost of tens of millions of dollars. Yet it is also easier than ever to produce and distribute indie games made for almost nothing and with a team of just one or two programmers and artists. So why choose to create an arcade instead of just distributing online? Games have always been about the collective experience of playing together with others, and with a captive audience at each Silent Barn show the arcade seemed like the best way to begin to create a culture of game players and developers in NYC. 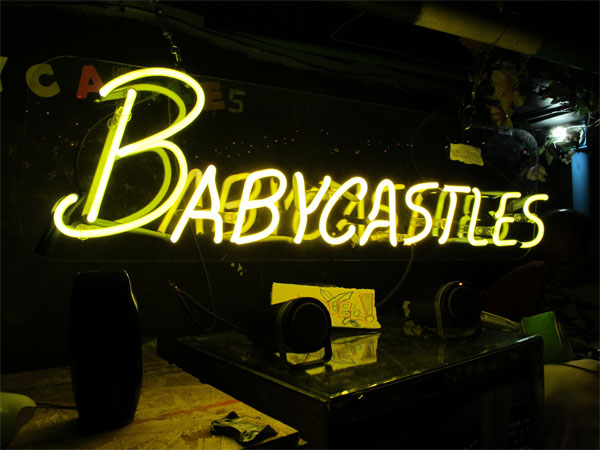 Just like the indie music scene of some smaller US cities or the game development community that has spun off of the Ubisoft campus in Montreal, Babycastles is part of a larger project to create an indie gaming community here in New York. Our visit to the arcade was a great chance to see some of the amazing games being produced and played in the city. If you want to see more of Babycastles, I would definitely recommend checking out the party they are hosting this Saturday and playing one of their cyborg arcade dancers.

wow that device is looking amazing!!