In Search of Reality at the Berlin Biennial
By Michael Connor

On the way to Kreuzberg from the Berlin airport, my taxi driver complained bitterly about the economic impact ofreunification. His job in West Berlin had been to arrange shipping logistics in the highly specialized context of a city cut off from its surroundings by intractable political circumstance. When the Wall came down, his profession evaporated, leaving behind deep-seated resentment.

This resentment, he claimed, is shared by most Berliners on both sides of the former Iron Curtain. Only people in certain neighborhoods - neighborhoods he derisively referred to as 'fake Berlin' - live in blithe ignorance of the persistent East-West division.

This disjunct between reality and its illusory other, the world of privileged consumerism, was at the heart of the 6th Berlin Biennial. In the exhibition catalog, curator Kathrin Rhomberg wrote that there is a growing "gap between the world we talk about and the world as it really is." In an effort to close this gap, the Biennial wrestled with contemporary issues and realities far beyond the gallery walls - an all-too-rare impulse in the hermetic field of visual art.

Unfortunately, this Biennial may well have convinced many of its visitors that artists should stick to the studio; too many of the works lacked any nuance in their portrayal of external realities. There was a highly unpleasant video of a horse being knocked off its feet, subtly titled Problems with Relationship. There was Bernard Bazile's inept installation of shouty protest videos from Paris. There was Sebastian Stumpf running into private garages just as the doors closed behind him, Indiana Jones-style.

Yet there were also moments of brilliance along the way. At its best, the Biennial yielded keen insights into the conditions of contemporary capitalism and the relationship between the personal and the political. Without further ado, here are some of the highlights. 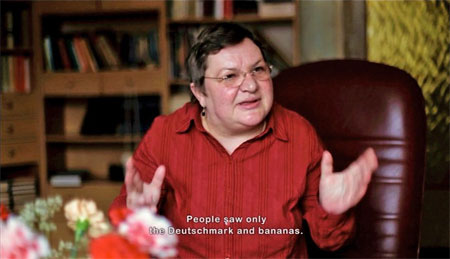 The intersection of the personal and political was highlighted in the heartbreaking story of one teacher in particular. The GDR would not give her partner, a foreigner, permission to stay in the country. With their newborn daughter in ill health, she was unable to leave the country with him, and he was driven to suicide.

Two months later, the Wall came down and the government - the source of his problems - dissolved. Nevertheless, she still mourns the loss of the GDR in many ways. Marxism, she says, teaches one to think and value human life; to this day she still refuses to eat bananas or drink Coca Cola.

In Collins' piece, interviews like this one are intercut with archival footage of East German political rallies and educational experts. By setting this footage to an ethereal soundtrack, Collins drained these propagandistic images and narration of their coherence and meaning, transforming them into alluring musical abstractions.

The video is less tricksy than previous works by Collins, who once famously subjected young people in Ramallah to a day-long dance marathon. Its emphasis is less on the politics or apparatus of representation than on the imaginative act of listening itself. Collins never appears on camera, but one can sense his presence throughout - empathetic and unafraid of the complexities of his subject.

Issues of representation come to the fore in Renzo Martens' Episode 3 - Enjoy Poverty.

In this 90-minute self-reflexive documentary, Martens travels throughout the Congo. As he witnesses dire humanitarian conditions, he keeps the camera trained on his own face, registering shock, anger, sorrow, and perhaps a touch of madness.

Martens continually links the micro and the macro, the personal encounter and the workings of global capitalism. His great innovation is to see poverty itself as a resource - a resource that is mined both by foreign aid workers (who profit from the generosity that poverty motivates) and journalists (who make images of the poverty, and sell these images).

In one encounter with a foreign journalist, Martens asks whether the photographic subjects retain any portion of the copyright or royalties of an image; they are, after all, the authors of the 'situation.' The journalist objects, saying that his subjects may have made the situation, but he is the sole author of the image.

Martens effectively wants to nationalize the poverty industry. He gathers together a group of Congolese photographers and convinces them that they would make more money if they make images of misery rather than photographing weddings and babies for a few cents a picture. It's really quite difficult to watch as Martens pushes the photographers toward the most miserable people in poverty-stricken areas and the sickest children in the hospital.

Soon, Martens comes to a disheartening realization: the images made by his local aspiring journalists are simply not good enough for Western audiences. He concludes that the effort will fail. It turns out that authoring the situation is not, in fact, enough. the image itself does have its own authority and its own authorship, quite separate from the underlying situation that it represents.

Such debates about the politics of representation are old hat; what makes Enjoy Poverty truly compelling is in the end the artist's own performance. He appears to be totally willing to open himself up to an absolutely desperate situation, to become emotionally involved and to be transformed by it. Enjoy Poverty is less a portrait of the Congolese situation than a self-portrait by a Westerner attempting to come to terms with the dire inequities of the world we live in. It is a portrait of the transformation of one Renzo Martens.

Such traces could be found in two installations by Danh Vo. In his 2005 work If You Were to Climb the Himalayas Tomorrow, Vo displayed several personal artifacts that once belonged to his father: a Rolex watch, a gold lighter and signet ring. We are told that these lush fetish objects were acquired shortly after the family's escape from a Singapore refugee camp by homemade boat.

These cannot simply be seen as family heirlooms. For Vo’s father, a man uprooted in the aftermath of the Vietnam War, these objects would seem to represent a complex desire for the consumer goods of foreign interlopers. The lighter, for example, calls to mind engraved zippos carried by American GIs.

Vo’s presentation of the objects reflects a certain criticality. They are displayed in a vitrine built into the gallery wall, creating an almost sacred feel. But on the other side of the wall, we see the vitrine’s reverse side poking through. It is a rough plywood box absurdly trying to create an aura of importance, an illusion like the goods it contains.

Traces of external realities also appear in Hans Schabus' carpets. The artist, known for elegant gestures such as sailing a Bas Jan Ader-esque boat through the Viennese sewers, collected carpets from local apartments and laid them on the floor of Oranienplatz 17, where most of the Biennial was housed. In the rough-and-ready installation style of the exhibition, the carpets almost flew beneath the threshold of perception, but they were a rich archive that spoke of the aesthetic and consumer decisions of local inhabitants.

The piece was called The Home is Inviolable, a title that immediately suggests that the opposite is true. The removal of these carpets is, of course, a violation of the home. And this violation of private space takes on additional resonance in the context of the rapidly-gentrifying neighborhood of Kreuzberg, where luxury cars have not infrequently been torched in recent months in protest against the displacement of 'established residents.'

Part of what interests me about Schabus' piece is that it calls into question the political conditions surrounding the Biennial itself, even referencing the Biennial’s own role in the gentrification process.

The Biennial had plenty of opportunities to engage more directly with its more immediate realities, for example by including more intervention-based or socially-engaged works, but it chose not to pursue these avenues. Minerva Cuevas, who is at her best when she's released into the streets on an unsuspecting population, showed a documentary video. Ruti Sela and Maayan Amir, who have been developing a floating sovereign island for open political discourse, showed.... a documentary video.

The most successful example of artistic intervention in the Biennial was a work by Roman Ondák. It was simply a cloakroom, enlarged to a ridiculous size and installed on the ground floor of Oranienplatz 17. Dozens of rows of empty rails stood at attention behind a bored-looking attendant; perhaps three coats dangled from them forlornly.

The piece’s humor lies in part in our own willingness to accept this type of absurd excess. I must confess that Ondàk’s piece didn’t initially register to me as an artwork - it somehow seemed perfectly natural that there should be a beautifully designed cloakroom ready to accommodate a fur-coated battalion.

Where the majority of artists in the Biennial explored the crushing and urgent realities that lie beyond the gallery walls, Ondàk’s piece could be read as a playful poke at the Biennial’s largely affluent consumers.

Michael Connor is a writer and curator based in New York. He is founder of Marian Spore, an accumulative art museum in Brooklyn. Past curatorial projects include the permanent exhibition 'Screen Worlds' at ACMI in Melbourne, Australia (credited as Consulting Curator) and the iCI touring exhibition 'The New Normal'. Connor teaches at SVA and NYU’s ITP Department and is currently Visiting Curator at Cornerhouse in Manchester, UK.