Trying the Hand of God (2009) - Knifeandfork
By Ceci Moss 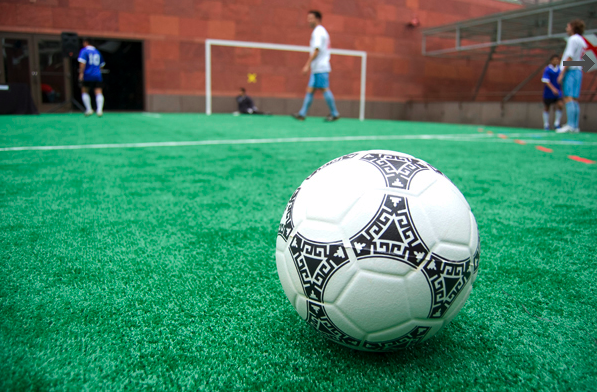 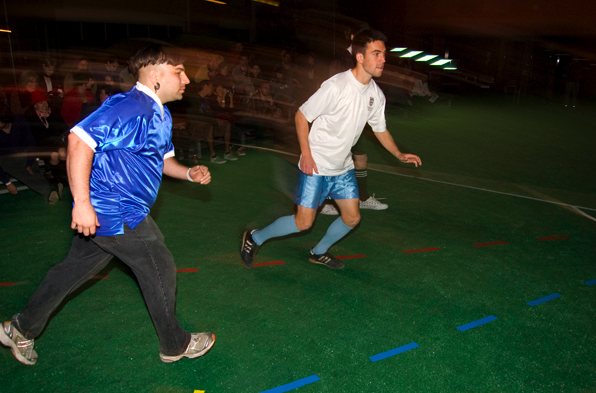 Knifeandfork explores the media-perpetuated nature of the chance moment in Trying the Hand of God, hosting a carefully choreographed continuous reenactment of the infamous illegal, but not penalized, "Hand of God" soccer goal from the 1986 FIFA World Cup. The performance is staged on a recreation of Mexico City's Azteca Stadium, constructed within the confines of the MOCA Sculpture Plaza. A limited number of audience members have the opportunity to play the role of Diego Maradona, the Argentine soccer legend who scored the controversial goal against England during the quarterfinals, eventually leading his team to win the match and the tournament.

Through live performance, Knifeandfork introduces the potential for variations on a familiar, media-repeated image. The issue of variation is particularly interesting in this case, as the controversy over the "Hand of God" goal raised complex questions of chance, skill, and fate. In their choreographed reenactments, Knifeandfork attempts to control for all possible variables, yet the possibility of a "perfect" performance inevitably remains elusive. Rather, the repetitions serve as a form of kinetic documentation, both of what was and what might have been, and they grant the audience agency over the representation of this iconic event which has been otherwise ossified by media reproduction.