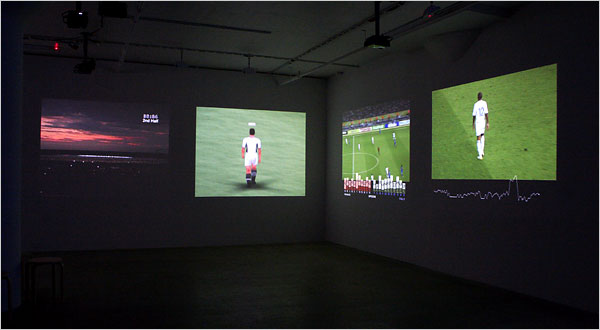 
Documentation of Deep Play from Documenta 12

A formal expansion of the artist's essay films, Deep Play brings together 12 different vantages on one of the biggest television events to emerge in the new millennium--the 2006 FIFA World Cup. The event, held in Germany, was reportedly seen by an estimated 1.5 billion viewers worldwide. Unfolding in simultaneous, real-time montage, Deep Play depicts the artist's own footage of the game, official FIFA footage, charts of player stats, real-time 2D and 3D animation sequences, and stadium surveillance, exposing the visual, informational, and technological design of these grand cultural spectacles. Though visually bombarding at points, the network of images and data stages a reprocessed disarticulation of spectacle, aptly pointing out the present conditions of visuality and its overwhelming influence on representation and subjectivity.