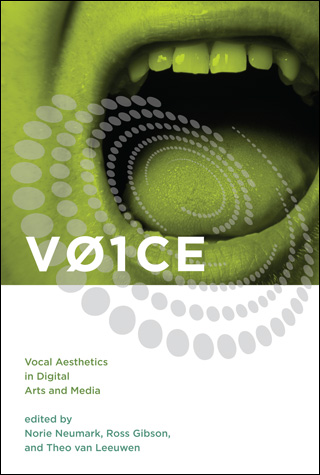 VOICE: Vocal Aesthetics in Digital Arts and Media, a new anthology edited by Norie Neumark, Ross Gibson and Theo Van Leeuwen from MIT Press, takes stock of the voice’s various transformations in the arts in the wake of the technological innovations of the digital age, and the ways in which artists anticipated these changes. One might expect musings on Barthes, man vs. machine, hauntology, linguistics or body politics, and those are all here; but there is also a refreshing and suitably wide-ranging cross-section of pop cultural examples and namechecks (Wolfman Jack, Portishead, Winnie the Pooh, BioShock, Meshuggah). Beyond its interdisciplinary parameters, the more theory-oriented papers are counterbalanced by an experimental essay (Theresa M. Senft’s “Four Rooms”, which juxtaposes phone sex, cancer care tapes, a voice recognition program, and Alvin Lucier’s “I Am Sitting in a Room”), a poem (Mark Amerika’s “Professor VJ’s Big Blog Mashup”), and a meditation (Michael Taussig’s “Humming”). The multiplicity of forms and inclusion of writerly as well as scholarly voices create an appropriately reflexive resonance.

A primary theme is the “migrancy” (a term frequently used here) from an analog world to a digital one, and how various innovations in digital technology are continuing the mediation of the voice that began with the advent of recording. Theo van Leeuwen expounds on the vocal approximations available on a digital piano as a continuation of church organ pipes or the oboe as an instrument striving to imitate the human voice; Thomas Y. Levin examines the evolution of post-answering service voice mail; Virginia Madsen and John Potts contrast podcasting with radio DJing; Ross Gibson proposes dub music of the 70s as a “pre-digital” genre in its use of multiple copies, processing and editing, and then examines its “born digital” descendants. In every case, the authors present digitalization as a step forward from analog, a timesaver affording an ever-accelerating number of possibilities and greater ease of use. There are no wistful, luddite pinings for radio days or magnetic tape, although Martin Thomas, facing an archivist’s dilemma of preservation vs. restoration, expresses some ambivalence about the crackling sounds found on old recordings of Aboriginal culture.

Another common observation is the increased dimensionality brought by digital tools. Helen Macallan and Andrew Plain trace the development of spatialization in film sound design, from Dolby Stereo to true surround sound, noting that in digital 3D film “sound—especially the voice…can simultaneously cooperate with the image and function in an abstract manner.” Several articles deal with the place of voice in virtual reality video games and machinimas (films that are made using real-time 3D virtual environments)-- Axel Stockburger even compares the “voice-less” gaming period to the silent film era. Much is made of the processing effects that are used to disguise the voices of actors who perform the parts of the characters in the games, but Mark Ward argues that the use of players’ own voices in MMOs (multiplayer online games) during game play takes interactivity to another level. The boundary crossed with such vocalizations may be similar in effect to those in Simone Forti and Yvonne Rainer’s groundbreaking early 60s dance pieces, which Meredith Morse describes in her piece “Voice, Dance, Process and the ‘Predigital.’” Rainer unleashed a torrent of screams at the conclusion of her 1962 piece Three Seascapes; in pieces like See-Saw and Rollers (both 1960) Forti instructed performers to sing, or she herself sang (in See-Saw, while she was offstage controlling the lights). By recognizing the voice as a part of the dancer’s body, Forti and Rainer injected the self into dance performance; in the MMOs the players too demarcate their presence by adding their voice, and in both cases emotion also becomes an element, transmitted orally.

A performative voice has always carried questions of authenticity. Along with the other ramifications of digital technologies on personhood, the shape-shifting audio effects that can be applied to the voice can be interpreted as striking at the core of identity itself. Norie Neumark notes that Laurie Anderson “destablized identity…through voice-altering technology, Anderson often performs a vocal persona…that is neither male nor female—nor androgynous,” while in “Vocalizing the Posthuman” Philip Brophy cites several examples of studio- processed singing that result in “mirrored selves” or “an aural apparition of its voided self.” It’s curious that no one in VOICE investigates the current wave of Auto-Tuning that now dominates pop and dance music and its attendant issues, e.g. its relationship to speech, singing, and voice synthesis, to what degree it’s a signifier of a digital culture in which online aliases are commonplace, or if the sci-fi robo-future once portended by the vocoder has actually arrived in the form of Ke$ha. But to what extent do electronic modifications to the voice really tamper with our sense of what a human being is? While the book’s recaps and reevaluations of different aspects of voice in the digital realm are enjoyable, it never feels like digitalization really represents a sweeping change in this particular area as much as an expansion. The revolution came with the initial capturings of the voice over a century ago, and even then it’s debatable as to whether mass acousmatization via sound recording and transmission had the same impact on the human psyche as the reduction of reality to an endlessly-reproducible (and disposable) photograph, or if the changeover from analog to digital sound is as radical as the jump from grainy film stock to HD video in terms of a perception of reality.

When we hear ourselves speak, we’re hearing the voice not just in the air, but traveling through the bone of the skull and the jaw—which is why a recording of our own voice, no matter how high-tech, will always sound different to us, and in this regard, will always be potentially as jarring as it must have been in the late 19th century. But with the voice comes breath—and with breath comes life. The muteness of photographs, it could be argued, is far more disturbing than the disembodied voice on a recording—you can still hear the breath on a recording, whereas in a photograph a body becomes not only incorporeal but silenced. True, with recording tape or a sound file the voice has become material, and mechanically pliant, but consider this quote from Joseph Beuys (cited by Isabelle Arvers in “Cheat or Glitch?”): “[a person] must through his own corporeal energy move the corporeal energy of his environment, using the stream of air that moves through the trachea, that presses through the larynx, and that enters the other organs of speech (the tongue, the palate, the teeth, the cavity of the mouth). He must ‘sculpt’ something inside this stream of air. And the one who receives it must unmake this sculpture.” The voice is inherently malleable, and must be “programmed”, in a sense, by its owner. Perhaps the best idea to take away from VOICE is not that the voice is necessarily redefined by digital culture, but that digital culture can be seen as an extension of the voice.

Alan Licht is a writer and an acclaimed musician. His career in music spans over two decades, and he's worked with a veritable who's who of the experimental world. Licht was also curator at the famed New York experimental music venue Tonic from 2000 until its closing in 2007, and has written extensively about the arts for the WIRE, Modern Painters, Art Review, Film Coment, Sight & Sound, Premiere, Purple, Village Voice, New York Sun, Time Out New York, and other publications. His first book, An Emotional Memoir of Martha Quinn, was published by Drag City Press in 2003; his book, Sound Art: Beyond Music, Between Categories, the first extensive survey of the genre in English, was published by Rizzoli in fall 2007.