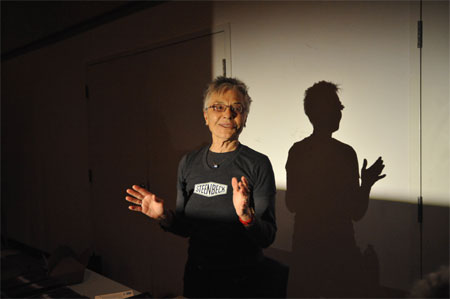 From April 7 to 11, during the closing days of the 2010 Images Festival, Toronto hosted nearly three hundred scholars, artists, curators and students at the Ontario College of Art & Design for the second International Experimental Media Congress. This was not the second “annual” Congress—second coming would be more appropriate. The first was convened more than twenty years ago, in 1989 as the Toronto Experimental Film Congress. Many (I can’t count myself among them) remember how political and generational agendas met in a polarizing clash of mythic proportions around the 1989 gathering. A significant group of detractors put forward an anti-manifesto and some to this day remain turned-off to the original event, as well as to the difficult project of exhuming it.

While 2010 had its fair share of deficiencies, two that I’m told plagued 1989—a limited canon and lack of women—did not make waves this year. According to filmmaker Barbara Hammer, who presented a performance in Toronto in celebration of her newly released book chronicling her life and work, "I was at the last EMC and the big complaint was gender inequality. Corrected!” However there was at least one notable casualty: “we lost the raucous edge of complaint and challenge we had twenty years ago.” I would agree that this “congress” was missing the kind of audacity, theater and conflict found in most houses of representatives. Although it was ostensibly not an academic conference, generally it felt like one. Most panelists delivered tidy presentations and the overall experience was managed and mannered, with moments of noise and inspiration. On the plus side of this, the week was smooth and friendly, with an engaging film festival and relevant exhibitions providing content for the evenings. I came curious and left satisfied.

Curator Henriette Huldisch moderated the first panel, “The Place of the Medium,” about medium specificity. Without delay a central, congress-long debate emerged: basically, film world vs. art world, filmmaker vs. artist, theater vs. gallery, and so on. Paris-based filmmaker and founder of the Frameworks experimental film listserv Pip Chodorov must have been the first panelist to touch on the matter when he commented on how artists working with film in a gallery setting are often using the medium “to record a realistic image,” rather than to advance it along an Avant-Gardist trajectory. While many comments of this nature made good points, they also made value judgments collectively amounting to a divided if not slightly acrimonious tone hovering over the subject. 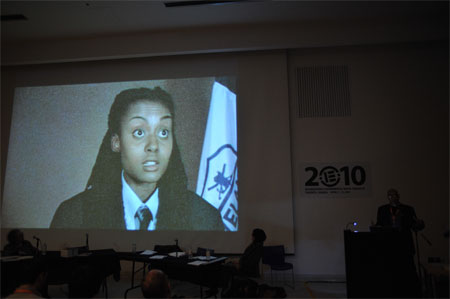 Ming Yuen S. Ma moved the consideration of medium toward identity politics, claiming that video, as a medium, remains “defined by who does it, where, and for what purpose.” In hindsight, conversations for and against expanding anthropological readings of media art traditions became significant sub-plots of the Congress.

Michael Snow—whose Wavelength (1967) Chodorov had cited earlier as a work that is very much intended for film, but nevertheless has been seen on YouTube more than 50,000 times—offered nimble reflections on contemporary issues pertaining to media and mediums. He brought up presentation as a core aspect of a medium, and how new distribution platforms—YouTube, for instance—necessarily bring up the issue of quality. As an immaterial thing, how a moving image looks constitutes what it is, and what concern could be more primary than what the thing is? Snow noted that “conventionally, representational images are what will survive being shown on anything. My films aren’t like that, they may be representational, but they have to do with qualities.” And for those who have only seen a representation of Wavelength online? “They haven’t seen Wavelength, they’ve seen a ghost.”

Following Huldisch’s summarization that the ways mediums are used (by artists, curators) seem to have more at stake than their intrinsic qualities, local film historian and host committee member Tess Takahashi—a thoughtful, no-nonsense voice during several open discussions—elaborated on how certain “ideologies, ideas, purposes, peoples and communities coalesce” around medium-specific practices of a given time. On the related matters of hegemony and progress, she went on to venture that someone had hypothetically said, “if there’s an Avant-Garde, it’s not here at this conference, it’s somewhere else outside the institution’”—some dithered clapping—“now, I don’t necessarily think it’s true, but it begs the questions: where? who? etc.”

The notion of institution was a sticky one for the burgeoning institution to broach. Ed Halter stole the panel devoted to this subject with a gracious but unsparing critique of the usefulness of an implicitly negative framing of “the institution,” such as the one put forth that Saturday morning. Halter noted how low the bar must be set for almost any organization devoted to exhibition, research or whatnot to be regarded as an institution, and given that, what a subjective statement it would be to exempt any organization from the status of such a label. Conceiving of “organization” as a verb rather than as a noun, he discussed how Light Industry, the micro-cinema he co-directs in Brooklyn, is run on “the least amount of resources to get the job done properly,” as a sustainable infrastructure designed to support and adapt to constantly evolving work.

Field reports from India and South Korea constituted the two sessions exclusively dedicated to non-North American, non-European institutions. Filmmaker and 16beaver member Benj Gerdes remarked to me that the Congress’s “structure was more on representing different contexts than bridging them or using this event to produce new ways of working that might emerge from it.” Naturally, this is a problem that runs much deeper than the Congress itself, and in fact reflects more on the entirety of the field. Hopefully future editions of the International Experimental Media Congress, like Berlin 2012, will more tenaciously pursue greater international participation. Maybe the best measure would be to locate 2014 somewhere more unexpected than Toronto or Berlin. 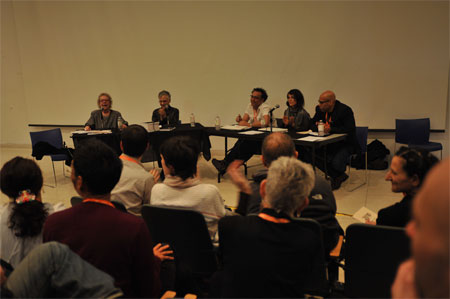 Irina Lembacher’s Friday morning panel “The Uncertainty Principle: Political Engagement and the Documentary in an Expanded Field” advanced the ongoing conversation around experimental film’s cross pollination with the visual arts, gathering three European artists working with documentary strategies, Ursula Biemann, Hito Steyerl and Wendelien van Oldenborgh. Steyerl shared her recent writing on the conceptual conceit of the museum as factory, which bears a tie-in to the phenomenon of so many former industrial manufacturing spaces having become museums in recent years. She articulated the socio-economic principles vested in the expanded field of the museum through canny, colorful metaphors, for example, the preponderance of unpaid labor holding cultural institutions together as the dark matter holding the Earth together as the basis of gravity.

Lembacher called on a comment that Harun Farocki made after he switched from showing work in single channel screenings to more gallery and museum settings: “when one of my films is broadcast on television it’s like casting a bottle into the sea. Anyone who sees my films in galleries and museums speak to me much more often than even those who see them in the theater, but it’s harder for me to understand what they’re seeing.” Perhaps part of this can be attributed to Steyerl’s characterization of the “default setting” of cinema in the art context as “distracted and circulating multitudes + dysfunctional technology = lack of attention and fragmentation of time and space.” While this sounds very bad on one level, and indeed it is a huge problem facing galleries and artists, this fragmentation of time and space is a special condition that can also be manipulated for productive effect. Different parameters for different modes of and settings for exhibition do expand the field, by offering multiple contexts, audiences and lenses that make processing work a more pluralized endeavor. Biemann made an interesting assertion along these lines that “film audiences” like to discuss content because aesthetic choices are somehow clear to them, whereas “art audiences” prefer the reverse: to discuss aesthetic choices because content does not present a mystery to them.

Somewhere near the end of this session’s open discussion, Lembacher gracefully erupted, stating an essential but somehow overshadowed position that, to me, is emblematic of the week’s most productive conversations: “single channel film is not necessarily a monolithic, hierarchical tradition. Re-speaking also has a tradition, and these techniques have their histories in both worlds. These two traditions need to interact, and we need to bring these tools together to make really powerful work that can do more.” Amen!

Kevin McGarry is a writer and curator based in Brooklyn, New York. He is a co-director of Migrating Forms, an annual festival of new experimental film and video, whose 2010 edition will run May 14-23 at Anthology Film Archives.