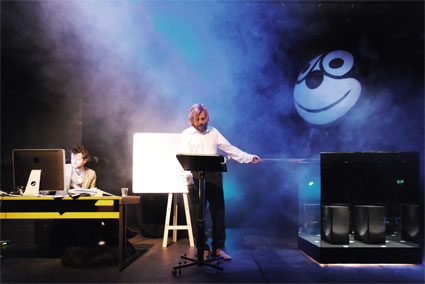 For anyone who has found pleasure in the dancing, drinking, and melancholy of Mark Leckey’s collage films—or the witty lyrics of his bands, JackTooJack and the defunct donAteller—it was a surprise when the British press labeled his work esoteric and over-intellectualized following his receipt of the Turner Prize last year. Perhaps the work featured in the exhibition of nominees, Cinema in the Round, lost something in the translation from a performance to a gallery installation. Leckey’s staged lecture wove Felix the Cat, Philip Guston, and The Titanic into an idiosyncratic history of art and film. Mark Leckey in the Long Tail, a new talk that premiered at the Institute of Contemporary Art, London earlier this year, takes the same approach and extends his argument into the twenty-first century, using examples and props to visualize how an internet-based economy has changed distribution, demand, and creativity. Its U.S. premiere, organized by the Museum of Modern Art, will take place at the Abron Arts Center on Oct. 1, 2, and 3. - Brian Droitcour

You’re a professor of film studies at the Staedelschule in Frankfurt. Is preparing lectures for students anything like researching The Long Tail?

The school is the reason I started doing these lectures—Cinema in the Round was the first one—because I was in this intense, information-gathering environment and needed to find an outlet for its excesses. I was thinking too much about the why and what for of art.

Do the histories you tell in your performative lectures intersect? Felix the Cat makes an appearance in The Long Tail as he did in Cinema in the Round, but is his role in the history the same?

All the stuff I make is cumulative, in that sense it’s like The Long Tail itself. It’s an aggregation, a body of work. Part of The Long Tail takes place in my flat, which has always been in my work as my stand-in. Felix is a stand-in for my fascination with moving images. For me, he embodies the magical properties of technology. Felix was the first image broadcast by television in an experimental transmission in 1929. The Long Tail talk started with a photo of a small wooden Felix the Cat doll surrounded by machinery, which I found on a site about the history of television. The talk is an investigation of that image.

It seems like it wasn’t as common for artists to talk about research as a part of their work ten years ago, when you made Fiorucci Made Me Hardcore, as it is today. How do you feel about its increased importance?

I am ambivalent about it. I think there is a tendency that’s developed out of “relational aesthetics” to approach art as this adjunct of social or political studies, gathering information into a kind of visual essay. Saying that, it’s exactly what I do.

Fiorucci Made Me Hardcore (Mark Leckey) from Anon. on Vimeo.

Video: Fiorruci Made Me Hardcore

The internet has made working with found footage more common, not only among artists but also among amateurs and hobbyists who just want to make something funny for themselves and their friends. How has the internet changed the way you conduct research? Do you spend more time browsing?

That’s all I do. That’s why I started thinking about The Long Tail because I’ve became increasingly doubtful about me gathering materials online and alchemically transmuting them into objects or editions in a gallery, into artworks. And like I said, it’s an increasingly common practice among artists and, yes, a lot of those “amateur” found-footage gags are much, much better. The second episode of “Autotune the News” blew me away when I saw it, more than anything I’ve seen in a gallery this year.

The Long Tail is the title of a 2006 book by Wired editor Chris Anderson, in which he uses the term to describe the situation in which distributors like Amazon and Netflix can cater to all niches without operating at a loss. Does your lecture enter a dialogue with Anderson’s book or did you take his imagery and metaphor and spin off in a different direction?

You’ve said it—it’s a dialogue with the concept of The Long Tail. I’ve used it as a very extended metaphor. The “long tail” for me is the means of production to broadcast yourself, and what happens when everyone’s a potential broadcaster, transmitting their innermost thoughts around the world. At the same time you’ve got spokesmen like Anderson and Clay Shirky talking—sometimes directly—about love, as a means of production, a congregation of amateurs building the Tail from within. So I see it as a long tail of desire.

Parts of Fiorucci Made Me Hardcore can now be found on video-sharing sites like YouTube and Vimeo. Did you have anything to do with this? Do you believe in making your work freely available to leverage the value of your live performance?

The art world doesn’t work like that. It has no concept of free. Value is inherent in the artwork. Being online probably devalues Fiorucci as an edition. I don’t know yet. It took me a couple of years of forging personal relations to get all the footage to make it—and now the best clips I used are up online, freely available. So I have a different relation to found footage now, actually I have a different relationship to any material now, because whatever I want is magically always there, online. I got asked if I minded before they put it on Ubuweb but I have nicked so much off them it would seem churlish of me to refuse to say the least. I like this idea of stigmergy—of contributing to marks already made—and I think of myself as being in a continuum.

In late 2006, as a band called Klaxons floated into pop consciousness on a raft made of glowsticks and fawning press criticism, its sails emblazoned with a fluo-tinted flag emblazoned "NEW RAVE," I decided to see what Mark Leckey had to say about the phenomenon. Some seven years earlier, Leckey had produced Fiorucci Made Me Hardcore, a 14-minute video piece based upon British subcultures of the '70s, '80s, and early '90s—principally, Northern Soul devotees, football casuals, and, most importantly, ravers. (For more on the video, including YouTube and UBUWEB links to it, see yesterday's blog post.) Leckey's footage of wild-eyed dancers, mostly culled from TV documentaries, was different from any other treatment of the culture I'd ever seen, avoiding both the typical bourgeois condemnations of the mainstream media and the often inarticulate defenses from the underground. Instead, the dancers, rendered in slow motion and gone murky with poor lighting and Nth generation video transfers, seemed like something from another world. (If they hadn't mostly been white, you could have wondered if they were perhaps Drexciyans, given the way they seemed engaged in a bubbling underwater choreography.) Fiorucci bore the tenderness towards its subject of someone who had most likely "been there," but it also stood at some considerable remove—not just historical, linking rave with other rituals and subcultures that had come before it, but also narrative, as exemplified by a shadowy figure that seems to preside over the video. Leckey, I reasoned, must have interesting things to say about this rave revival. He did