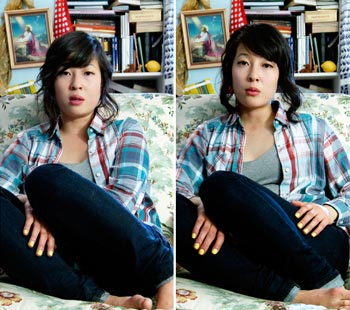 Candice Breitz’s current exhibition "Candice Breitz: Same Same" at The Power Plant in Toronto includes the premiere of the first works in Factum, a series commissioned by the gallery. Named after a pair of paintings by Robert Rauchenberg, Factum I and Factum II (both 1957), that appear indistinguishable but reveal differences on closer inspection, Breitz’s Factum consists of interviews with identical twins, found by placing ads on craigslist in Toronto and in the city’s alternative weekly. Each set of twins appears side by side one another on matching monitors, hung portrait-style. Breitz spoke to each sibling separately about their lives, but using similar questions, then edited the discussions so the pair’s words and gestures play off one another, highlighting both parallels and departures. The college-age Kang sisters, for example, diverge when discussing whether one twin has had a tendency to look up to the other, while a set of seventy-something siblings tell complementary stories of getting not-quite-matching rounds of plastic surgery over the years. Each piece runs roughly an hour, feeling like deftly structured documentaries unto themselves.

Prior to the opening of Same Same—her first major solo survey in North America—Breitz gave a sneak preview of a few freshly-edited examples from Factum at the Toronto Film Festival in a talk called “The Origins of Factum,” part of the festival’s Future Projections sidebar, which focuses on the intersections of cinema and the visual arts. In addition to a discussion with TIFF co-director Noah Cowan, Breitz screened a number of clips from cinematic works that informed the creation of her latest work. The following are excerpts from a transcript of her talk, including three of the films she screened. - Ed Halter

I'm going to start by answering two questions that might leap to mind.

Why twins? Twins I guess for me seemed like a special opportunity to pick up on two things that I have explored over and over again in my work in the past few years. Just in brief, one of the kinds of things that has preoccupied me for quite some time is the complex “ping pong” we each experience in various degrees of consciousness, the sense we have as individuals in the world, the desire to be idiosyncratic, to separate ourselves in some way from the world and imagine ourselves as distinct entities, on one hand. On the other hand: the constant series of reminders that we inevitably deal with every day that point to the fact that we belong to communities of various kinds, and that, as such, our sense of ourselves as individuals really only has any weight in reference to our communal belongings. That means your relationship to your family, to your nation, to your hockey team, to your church, whatever kinds of solid or imagined communities that you subscribe to, that you imagine yourself being a part of. And that is a rather generic, basic condition of being. It's one that appears again and again in my work.

It occurred to me that twins, really in some way, are the smallest possible form of community. As soon as you have two people, you're no longer an individual, you're in a community. I had an intuition that working with twins, thinking about the twin relationship, could open up to a series of understandings about what it means to be a person in the world. I thought that twins might have a very magnified awareness of that dynamic I've just been trying to articulate, that sort of bouncing between one’s self as an individual and as a communal being. I suspected that maybe twins have had to deal with that and engage with that dual sense of self in a more acute way than some of us might, but that that experience of the world is one which we all share.

But first off I should say that twins have been used, cinematically, often as a kind of form of freakishness, otherness. For me, what was interesting about twins was how they become an exaggerated filter through which one can possibly understand the place and experience of all non-twins, too.

Why film? Well, I always work in film, and two things about film that made it particularly suited for this project, one being the obvious fact that endemic to the moving image is the possibility of doubling, of duplication, of looping, of repeating—this potential to have more than one, to offer more than one. And of course the other thing, which is the good old cliché about film (and this is a simple thing to say but it can be understood in complex ways) is that film can be regarded as a kind of mirror, something that mirrors. The question is whether it's a trick mirror, or whether it’s a transparent mirror. That use of the word mirror may be a little bit deceptive. The mirror isn't something that always tells you the truth.

What interested me chiefly about that clip [from Duck Soup] was the failure of the mirror, the expectation that in this attempt to get to know one’s self better, to understand one's self, to develop a transparent relationship to one's self. The differences are far more interesting than the moments in which the sameness sort of succeeds.

I’m showing you this clip more for formal reasons. I’m interested in the attempt here to represent two using one—Haley Mills appears as both of the twins, one of the earlier and successful attempts at using split-screen technologies where you have two prints which are composited together, so it seems as if Hayley is acting with her self. It got me started thinking about how hard it is to represent someone outside the model of oneness which is dominant. We live in times, roughly since the Renaissance but certainly culminating in the last few decades, where there is something of a cult around individual identity. We have in us this idea that it’s important to be an individual. You must be an individual at all costs—you must distinguish yourself. That doesn’t leave too much room for thinking about forms of identity that exist as interactions between people, that exist in the spaces between people rather than what’s being projected from the inside of a oneness.

[Breitz shows a clip from David Cronenberg’s Dead Ringers (1988), and the entirety of Cronenberg’s Camera (2000)]

What really turned me on was the way [Camera] loops imperfectly—it comes back at the end, but not in the same way. The lines are exactly the same at the beginning and at the end, but with one word changing. More dramatic is the change in aesthetic. The first shot is shot with video, and its got that cold, crude video appearance, and the last shot is a warmer film image. What I loved about that and got very inspired by was the idea of a loop, a sameness, something that repeats but is different when it repeats. The title of my exhibition at the Power Plant is Same Same and I hope that resonates for some people with the phrase “same, same but different.” Things seems to repeat themselves, they seem to come back, but each time they repeat themselves they come back at a different point in time, and arguably have a different resonance.

I’ve been wanting for a long time to use oral history…which I think is very African, histories that are not written down on paper, histories that are not told in a formal, authoritative way. But histories that become histories by being retold—the kinds of stories that a grandmother tells to her grandchildren, the grandchildren repeat them to their children, and that again is an imperfect loop. As the stories are retold, we remember the things that are significant to us in the retelling, we might throw in a little bit of flavor to embroider the story in the direction that interests us in particular, leave out details which never seemed particularly interesting to us in the first place. So as that story gets repeated—and this is something that is very beautiful in cultures where the book has not been the way of recording history—that loop keeps on going around but every time it’s a little different.

So, I was thinking about twins, I saw the Cronenberg movie [Camera], and I thought, that’s a really interesting formal way to think about the problem of how to represent twins. You certainly want to acknowledge the particular nature of the twin relationship, which is very much about acknowledging an other, and existing in the world alongside someone else. I was interested in working with monozygotic twins, and I wasn’t interested in the separated-at-birth, Parent Trap variety. I was interested in twins that grew up in the same family, in the same city, who had had arguably similar formative experiences. The debate that often rages around twins is the nature/nurture. So their genetic nature arguably is identical, their experience in the world arguably is identical—they grow up speaking the same language, same parents, same school. And yet—they emerge as two distinct individuals who have two very distinct experiences of the world.

[In Factum I’m also looking at] whether it’s possible to both respect genres like portraiture and biography, but to mess them up a little bit, to undermine some of the assumptions that are built into those genres, like the idea that a story is simply a story that is told factually. There are these little moments where it becomes clear that our memories are always somewhat fictionalized. The way that we remember things, the things that remain with us, that become important to how we narrate ourselves, are highly fictional, rather than solid, straight, easy truths. Obviously the “stereoscope” was a formal metaphor here: looking at the story from two slightly different perspectives. Each of the perspectives gets tremendously enriched by the story of the other. You move away immediately from this notion of a single monolithic truth-telling self.

I guess what I was trying to bring to the fore here, more so than in last works, is that I don’t believe there is anything that is a perfect loop. Technically, it may be true that a piece of footage can be played twice. But the way that you receive that footage—you know, let’s just take a crass example. If you see Dead Ringers at age 12 and then again at the age of 28, what you take home from that. Theoretically you’re seeing the same piece of footage, but the way in which you bring your baggage to that, what you take from it, how it hits you in a particular way at a particular moment, means for me that the loop isn’t really identical. I mean, every Monday is a Monday, and every Christmas is a Christmas but it’s never really the same. Same Same (but different) is the title of the show but it could have also been Same Shit, Different Day! I also have noticed this by having the luxury of traveling with my work and showing it to different audiences… although you’re showing the same thing, theoretically to a group of people in Johannesburg or Istanbul or Toronto…it’s amazing.

For me, as someone who’s making loops, and working in the business of repetition—colleague of mine calls it the “loop business”—what I noticed very early on is that repetition never generates sameness, it always generates difference, at the level of reception. Which is key for me—I think these things are not interesting until they’re installed and somebody’s eyes are upon them. They’re kind of dead until somebody’s watching them, or responding to them, reacting to them. And that’s where the difference comes in.