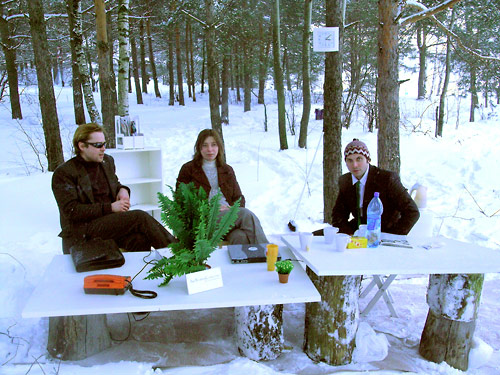 Image: Art Business Consulting, Your Call Is Very Important to Us, 2005

"Contact," the most recent exhibition by the group Art Business Consulting, featured a rocket ship built from computer hardware, with a trio of yuppies floating weightlessly on a video screen inside. The trappings and denizens of the office have figured in ABC's work since Mikhail Kosoplapov, Maxim Ilyukhin, and Natalia Struchkova formed the group in 2001, and as in "Contact," they have always been subject to some sort of disfigurement. Early on, ABC established a pseudo-corporate identity by showing up at art openings in expensive cars and nice suits, performing the role of Russia's nascent upper-middle class while their colleagues in the Moscow boheme were riding public transport in sweaters and jeans. To solidify that image, ABC made good on their name's promise of "business"--in 2004, they became dealers, selling the work of artists they liked at ABC Gallery. Change happens quickly in Moscow; now that the market has dwarfed institutional influence in Russia's art world, linking the words "art" and "business" doesn't feel as novel as it did in 2001, and Western-style corporate culture has lost the cachet of an exotic interloper. ABC's symbolic launch of the office into space in "Contact" came on the heels of the loss of their own office space; at the end of May, the arts complex where ABC Gallery was located shut down to make room for a new development. While Ilyukhin, Kosolapov, and Struchkova continue to work as artists, businesspeople, and consultants, the events of last summer seem to mark a turning point, a time for reflecting on the future of a project initiated to document social change now that those changes are entrenched. 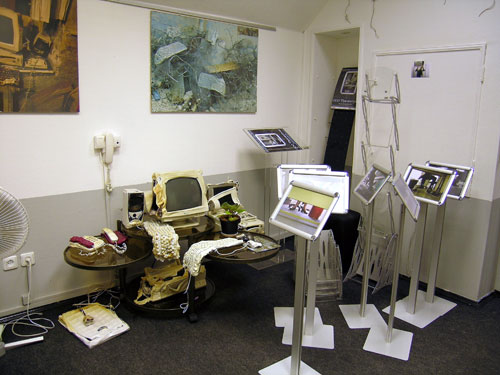 Image: Art Business Consulting, installation in the office of Prezentuar, 2004

"The idea for ABC began with horror at the notion that I would have to work at an office," Ilyukhin, the group's de facto spokesperson, said in a conversation in Moscow last month. And though he did end up working in an office--for the Moscow branch of Halliburton, no less--the work of ABC always balanced horror with sympathy. Their use of the office's visual vocabulary was never dark or grotesque enough to be read as a critique of corporatism. The Yes Men impersonate companies to infiltrate media platforms, like news shows and conferences, where they use exaggeration and parody as tools to highlight corporations' socially ruinous practices. Goldin+Senneby engage actual companies as well as artists and thinkers in their mimicry of corporate language and behavior, all to create structures that demonstrate how theories of the virtual are embodied in the everyday operations of business. ABC's approach is looser, more ambiguous and playful. Their first intervention at a real company had nothing to do with criticality; a maker of installation equipment for business expos commissioned them to do a show in its office. It brought a lot of media attention to both the company and the artists, and as ABC told the Russian magazine Artchronika in a recent interview, they subsequently fended off a flood of requests for similar shows by making outrageous proposals to their corporate suitors (for example, they told one would-be client to build a living billboard, with employees working in a transparent enclosure above a highway). ABC flirts with the appearance of both branding agencies and activist projects; their art isolates the values and quirks of corporations by transposing them to incongruous settings. 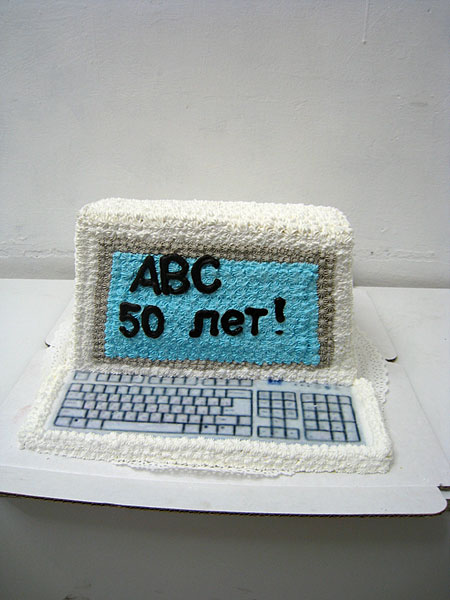 Image: Oxana Dubrovskaya and Nick Vavilov, cake served at the opening of the exhibition "Moscow and Muscovites" at ABC Gallery, 2008 (Text: "ABC is 50 years old!")

Corporate culture has developed gradually over several decades in the Anglo-American world, but it's a sudden insertion in Russian life. Ilyukhin, Struchkova, and Kosolapov chose to ape a company because they couldn't ignore the rate at which new businesses were opening in 2001, as the country recovered from its economic default of 1998. It was just as dramatic as the rapid spread of computing technology, a story that statistics tell in broad strokes. The Levada Center estimated that 20% of Muscovites owned a personal computer in September 2001, a figure that rose to 33% by Sept. 2006. The rate of change was more drastic in the rest of Russia, where ownership grew from 5% to 22% over the same period (source). (By contrast, in the United States home internet usage rose from 50.4% in 2001 to 61.7% in 2007, according to the U.S. Census Bureau.) Changes in the public outlook and opinion are central to ABC's interests, and not only in their own work. Ilyukhin said that ABC Gallery represented artists whose work was about, as he put it, "post-computer consciousness" and "euroremont." He defines the former as a type of vision affected by computer use, "when a person sees an image through Photoshop." Euroremont is a common euphemism for renovations that emerged in the 1990s, when it became popular to refit Soviet buildings to conform to an abstract ideal of the un-Soviet, as summed up in the prefix "euro". ABC Gallery's exhibitions included Johannes Osterhoff's shields emblazoned with Windows icons and a display of a blog by Olia Lialina and Dragan Epenschied. 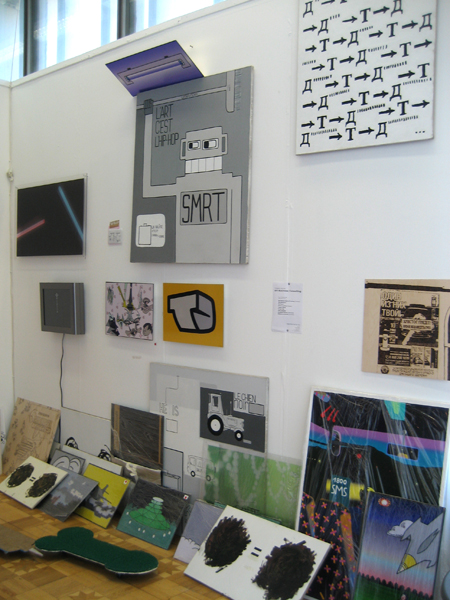 Ilyukhin insisted on separating the activity of ABC the art collective and ABC the gallery, but the group's exhibition practice often seems to deliberately blur that division. In 2007, for their first exhibition at XL Gallery, ABC chose to mix their own works with some by the artists their gallery represents. Last year, the procedure was amplified when Galerie Krinziger in Vienna invited XL to organize an exhibition in their space, XL picked ABC, and ABC curated a group show. This September ABC organized Universam, a festival where small galleries and artist collectives were allotted cubicles. Once again, ABC had been approached with an opportunity to produce a large-scale project, and in response they chose to facilitate the display of other artists' work.

ABC's promiscuous mixture of art-making, curating, and dealing extends from an output centered on violating norms, whether that involves putting office furniture in the woods or eroding the clean discreteness of computer hardware by melting mouses in a vaguely zoomorphic pile. By tainting the office setting with extraneous elements, ABC foregrounds the corporate aspiration to purge contaminants from the "outside world" in a maximally efficient, artificial environment. "One must realize that life in a spaceship is like life in an office [...], where you not only work and relax but spend days at a time," ABC wrote in the statement accompanying their space project. "Training for life in space takes place on earth, in any office." Contact broke the order of the office by appropriating keyboards to build the carcass of a satellite. But any violation of a taboo implicitly attributes the source material with special value; by playing with the office, ABC affirms its position as a sacred space. "If just once in his life [Ilyukhin] had held a jackhammer, hardhat, or cement in his hands, he would realize how beautiful and noble the office truly is," Kosolapov said in ABC's Artchronika interview. "It's paradise! Sure, it's asexual and awful, oppressive and airless, but paradise nonetheless."