There seems to be an unshakable division of labor between two of our major senses. 'Sight and Sound' and 'Audio and Visual,' are often paired as binary opposites, understood both as semantically and biologically distinct yet totally interdependent. “See This Sound,” an exhibition currently on view at the Lentos Museum in Linz, Austria, delves deeply into this co-dependent relationship. Far from another "art and music" show, the exhibition looks at numerous cultural, metaphysical, biological and neurological explorations of these senses - and how artists have mined them for decades. By highlighting their distinct and convergent streams of influence, “See This Sound” uses sight and sound as a metaphor for similar divisions and dependencies between "visual," "sound" and "media" art.

Well over a hundred works fill the top floor of the Lentos. Typically, and for good reason, this show begins where most discussions around art and music begin -- in the 1920s with the work of filmmakers like Oskar Fischinger, Viking Eggling, Mary Ellen Bute, Hans Richter, Norman McLaren and Len Lye. Often grouped together under poetic monikers like "visual music," or "music for the eye," the themes explored by these artists, such as language, syntax, and sensory experimentation, are seen continuously throughout visual culture. Hans Richter's Rhythmus 21 (1921/24) is a classic early example of the form, and Norman McLaren's 1951 Pen Point Discussion, in which he illustrates his process of drawing directly on a film’s soundtrack, serves as a primer for the genre. Other works such as Len Lye's Colour Box (1933) and Mary Ellen Bute's Rhythm in Light (1934), as well as numerous drawings, paintings and film stills, challenge distinctions between vision and sound, and music and visual art -- providing fertile historical ground for the rest of the show.

A considerable amount of real estate in the show is dedicated to what the curators have called “New Modes of Perception.” This section frames a diverse range of works within the metaphysical, psychedelic and immersive sensory experiments of the 1960s and 70s.

LaMonte Young and Mariane Zazeela's complex sound and light installation Dream House is here with its "continuous periodic composite sound waveforms," but almost more absorbing is the simple Dreamachine (1960) by Brion Gysin. A cylinder with slits cut into it, a lighbulb and a turntable, Dreamachine is thought to be the first object designed to be seen with your eyes closed. Actually patented as a "method and device for producing artistic sensations" the machine produces an array of colors and shapes on the inside of your eyelids. Directly adjacent to Dreamachine is Ira Cohen's Invasion of Thunderbolt Pagoda (1968). Unfortunately installed on a small monitor with headphones (although with a beanbag chair) this work still manages to command attention. A fantastical exploration of sound, image, dreams, trance, music, sexuality and drugs, Thunderbolt Pagoda seems both dated and remarkably contemporary. 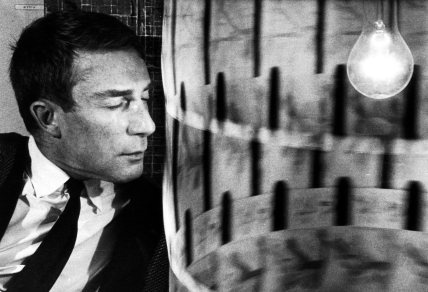 “New Modes of Perception” also takes on the idea of "embodiment." A moving example is David Rokeby's Very Nervous System . Very Nervous System, both an artwork and a software system (written by Rokeby), translates the user’s actions into sound and music. Walk into an empty room, your body's movement animates the space with a variety of sounds both jarring and soothing. Although this type of motion tracking technology is far more ubiquitous now than it was in 1984 (when the piece was first made), it still manages to impress -- illuminating a deep connection between space, sound and our own bodies.

The transmission of sound through the body is also the subject of Laurie Anderson's Handphone Table (1978). At first glance it is just a simple table, but sit down with your head in your hands and you can hear music transmitted from the table to your ears, through your arm bones. While Rokeby's piece forces action in order to embody sound, Anderson's conversely rewards stillness and contemplation. Intensely personal, Handphone Table is one of the most moving and elegant works in the show.

Another major thematic stream of “See This Sound” is the relationship between sound and vision from a pop culture perspective. Although this is a curatorial perspective that has been privileged at length, within the carefully crafted historical context of “See This Sound” our understanding of the cultural connections between art and music is significantly enhanced.

While the show mines well-trodden territory of popular narrative cinema (through works like Louise Lawler, Douglas Gordon and others), where it is most effective is in the area of popular music; particularly the highly cultivated images and identities on which pop music depends. While I might not call Throbbing Gristle "pop" they were certainly masters of their own image, and a series of posters, album covers, photographs, films by Derek Jarman and photos of Andrew Gowans drive this home. Likewise, Peter Saville's post-punk images for Factory Records in the 1980s defined a new era of image production and identity politics for the music industry.

Identity politics plays out more pointedly in Adrian Piper's Funk Lessons . The video, which documents a series of performances from 1982 to 1984, is also notable for being one of a few works in the show to highlights the roll of dance in the relationship between image and sound. The videos show Piper and her black assistants teaching white people to dance to funk music. By playing on stereotypes of race and ability, she educates her audience about the role of funk in African American culture, its history and its African roots. What Piper called "listening by dancing" Funk Lessons is a welcome interjection of straight up dance music, and also provides a pointed political perspective that is absent from most of the show.

In Mathias Poledna's Version dance is again the subject as a group of good-looking people move through the static frame. We see heads, legs, torsos and arms moving rhythmically to music that we cannot hear. But despite the absence of sound, their bodies transmit a rhythm that is unmistakable -- so clear in fact that this was the only room in which I saw audience members dancing or moving along with any "beat."In this sense, it was a true embodiment of the "visual music" with which the exhibition began. 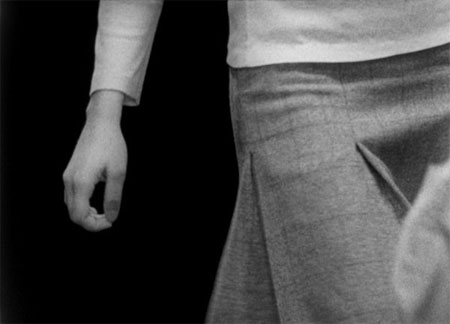 The few pieces covered here only scratch the surface of the works on view. John Baldessari, John Cage, Tony Conrad, Manon De Boer, Jeremy Deller, Valie Export, Yoko Ono, Pauline Oliveros, Nam June Paik, Andy Warhol, and countless others are included. Luckily, "See This Sound" devoted much time and effort into creating a website that provides a remarkable amount of contextual information, including original essays, photographs and links to works that were not included in the show but are relevant to the conversation. Currently available only in German, an English version of the site will be launched in December.

Currently a freelance curator and researcher, and also a writer for Rhizome, Caitlin Jones was formerly the Director of Programming at the Bryce Wolkowitz Gallery in New York, NY. Prior to this, Jones held a combined curatorial and conservation position at the Solomon R. Guggenheim Museum. At the Guggenheim, she co-curated the groundbreaking exhibition "Seeing Double: Emulation in Theory and Practice" and coordinated the Deutsche Guggenheim exhibition, "Nam June Paik: Global Groove 2004." As a key member of the Variable Media Network, Caitlin has also been responsible for developing important tools and policy for the preservation of electronic and ephemeral artworks. In addition to her work for Rhizome, her writings have appeared in a wide range of exhibition catalogs, periodicals and other international publications.