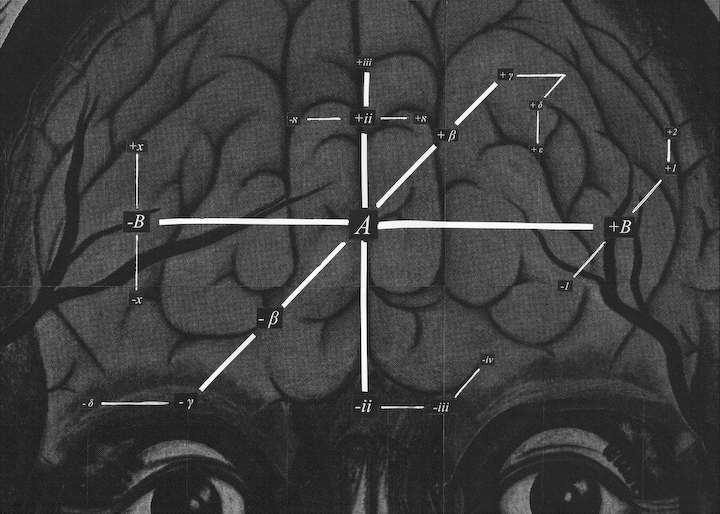 The metaphor of the brain as a database (or, if you prefer, the database as a brain) flatters and anthropomorphizes the machine more than it explains the mind. Gray matter doesn't seem to be organized in a way that makes the storage and retrieval of information easy; rather, the classification and categorization that characterize the database are pre-digital technologies invented to manage the ever-increasing amounts of information that civilization requires citizens to master. Cicero used a "memory palace" when delivering orations. As he spoke, he would imagine moving through a house where each room and object represented points he needed to make in his speech and the supporting evidence he needed to make them. The antithesis of such memory systems might be the dream, the mind's nightly refresher that reconfigures the day's events and data in disjointed, symbolic narratives. Both the memory palace and the dream are based on irrational elements: subjective experience, arbitrary connections, and word play. That the memory palace is created under the thinker's deliberate control only highlights the conscious mind's eagerness to do what the unconscious mind does automatically. Even as Cicero publicly performed the constructs of reason, his brain was circumventing them. 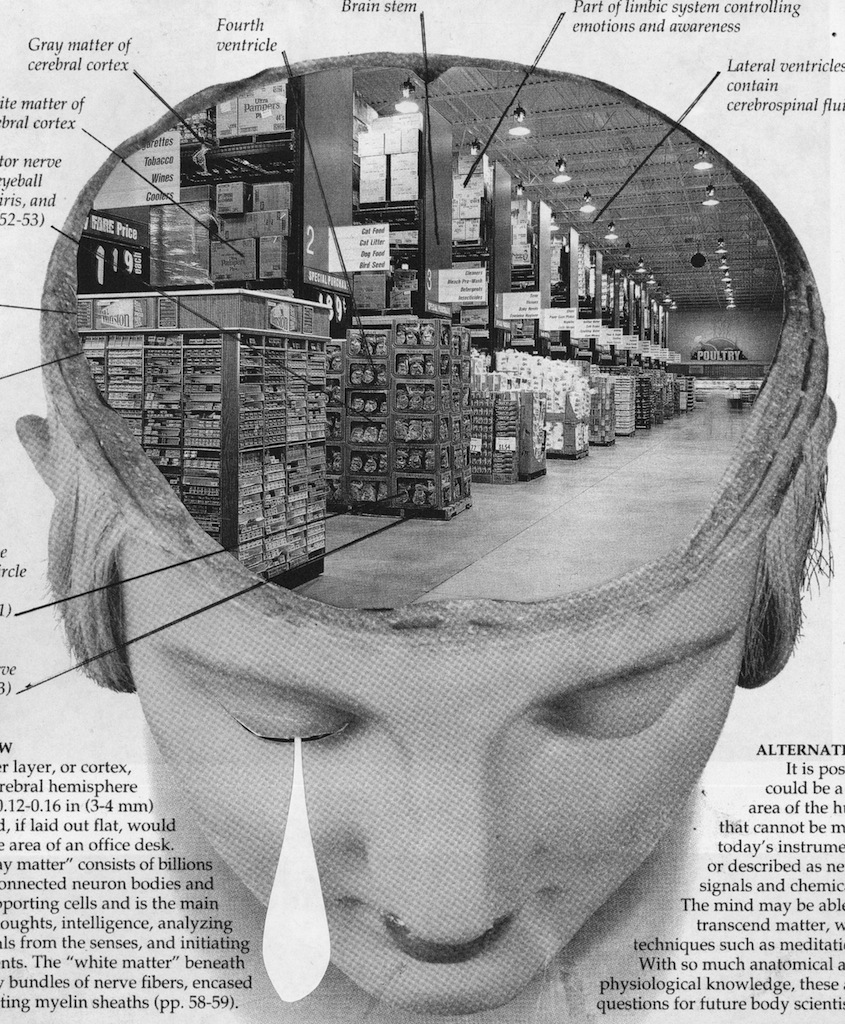 Last July, in a New York University faculty residence on West Houston Street where Picasso's sculpture and I.M. Pei's architecture face off in a courtyard invisible to Google Earth, Alexandre Singh delivered an installment of his Assembly Instructions Lectures, a series of talks illustrated by a pair of overhead projectors. After introducing his audience to Matteo Ricci, a sixteenth-century Jesuit missionary who taught the memory palace technique to Chinese officials to convince them of the superiority of Western (and by extension, Christian) thought, Singh launched into a detailed recounting of a dream he supposedly had, in which Ingvar Kamprad, founder and principle shareholder of Ikea, announced that the master floor plan implemented in every Ikea store around the world encodes a classification of all human knowledge. For instance, the arrangement of shoes, hangers, and sweaters in a display closet, as Singh demonstrated, represented the kingdoms and phyla of life on Earth. What's more, the Ikea system of Singh's dream world does not merely encode--it controls. If something changes in a store--say, a new couch model is introduced for the new season, or a passing child moves a prop coffee-table book around a fake living room--the fabric of reality is altered.

Singh's talk fleshed out the dim awareness of elaborate systems that one senses in dreams but can hardly recall or convey when awake. As the Ikea thread developed, it snaked in and out of the spotlight--perhaps following the "long natural way," the meandering path of the Ikea floor plan that makes consumption leisurely and fun while forcing shoppers to view all of the store's merchandise--and subplots emerged along multiple tangents. Singh argued that brown, not white, was the sum of all colors as he turned over transparency sheets scanned from pages of John Ruskin's book Modern Painters, where "brown" had been pasted over names of all the colors. Piero Manzoni, the artist who canned the essence of light, made a cameo when Singh's Dante-like narrator found him sleeping in Ikea's mattress section. Shortly after, Yves Klein appeared in a bed next to him.

Singh will give the lecture again on November 11 at White Columns, on the third night of a four-part series organized in conjunction with Performa 09. This Monday's offering, "The Alkahest," is a sprawling epic that relates golem tales and abstract painting to myths of the creation of the world. Storytelling is the backbone of Singh's work; several of his exhibition projects were spawned by his thousand-page book, The Marque of the Third Stripe, a fictionalized biography of Adidas founder Adi Dassler. It is probably not uncommon for artists to experience a sense of futility when they set about making objects, when "it's all been done." Artists like Singh give heft to their works by imbuing them with symbolic power in the context of narratives of their own making. Singh uses many sources, but professes a fondness for surfing Wikipedia. In an interview with ArtReview, he said: "The Surrealists made an art of finding drawings in the grain of wood. I think I do the same finding stories in the grain of Wikipedia." The superficiality and transience that make the user-generated encyclopedia a dubious resource for research are boons for a creative reader like Singh, because they make room for drawing new, unlikely connections.

The idea of Wikipedia--or more broadly, the internet--as a restless data set that denies autonomous spaces for myth and history, news and fiction, offers one perspective for considering Singh's work. The slippery transparency sheets he uses as slides make for a satisfying dramatization of the flat flipping of web pages on a screen. His unbound books become legible for his audience when the overhead projector's beam of light transforms their horizontal pages into images on the wall--a low-tech, small-scale, fairy-tale version of the mass media beaming content to the people. Of course, the internet metaphor fails to provide an exhaustive reading of the Assembly Instructions Lectures. There is a lot more going on, and all real and imagined similarities between the overhead projector and more sophisticated broadcast media vanish in the striking moments when Singh exploits his chosen medium's unique physical properties. In the Ikea lecture, as he layered images of equestrian statuary on top of each other to illustrate the conventions of that genre, the darkening filmy buildup of transparencies offered silent "proof" for the thesis that white light is one of the components of brown. 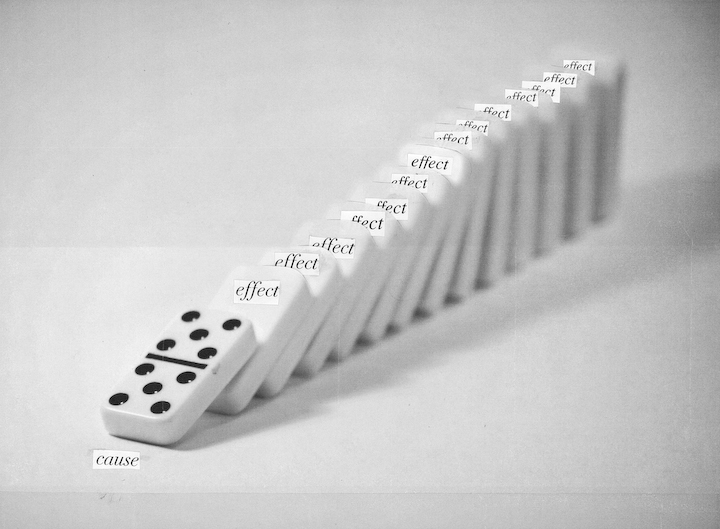 Singh's work is now on view in another format. "Assembly Instructions (Tangential Logick)", at Harris Lieberman Gallery through November 14, includes some of the visual aids from the eponymous lecture as framed collages hung on the wall. They are arranged in an order that tells loose tales while simultaneously visualizing potential fallacies and pitfalls in the construction of knowledge. It is divided into three sections, each devoted to a way in which supporting evidence can be combined to achieve a conclusion. "Linear association/causation" is illustrated by a simple progression: a bucket (A) is left outside in the rain (B), and then the bucket full of rainwater (C) is swarmed with mosquitoes (D), which bite the head of a man (E) who succumbs to mental illness (F). "Cross-linear association/causation" occurs when two of the events are connected outside of linear temporality. When (A) and (D) meet, the sight of buckets makes a woman feel itchy, while connecting the dots from (B) to (F) results in psychic unease whenever it rains. "Tangential association/causation," the concept represented on the gallery's third wall, is the logic of false etymologies and accidental similarities. The orange, as Singh's diagram posits, is related to gold by its consonance with the Latin aurum, and thence pirate's bounty. The resemblance of the orange's pithy, veiny sections to the hemispheres of the brain evinces its links to inner organs. Other such revelations pile up in a pyramid of errors to yield the final story: "Every winter FLORIDA-FACED Pirates Slaughter and Bathe in the ORANGE JUICE and entrails of SANTA-CLAUS so that the SPRING may COME AGAIN."

The trappings of logic are all over these collages. The letter Omega marks the final element of each set. "Beta" and "-iii" are dim reminders of high-school math assignments. But added to Singh's encyclopedic mix of cutouts--Disney's Snow White and Hindu temples also figure prominently in it--the letters become ritual symbols. It's no accident that the full title of the related lecture rhymes "Tangential Logick" with "Tangential Magick." Framed in the narrative of an opium eater's wandering, hazy mental state, logic and magic are equal opposites, two systems of transfiguration that take one thing and turn it into something else. If Singh's tales seem to side with magic, it could be because they are balancing out the privileged position of logic. Both are effective and fallible in his explorations of how the creative faculty eases friction between data and consciousness.

I think this discription is very useful for our knowledge.