If we look back forty years, video’s ability to continuously process new data in real time and render it for visual display make it an important correlate technology for contemporary computing systems. In 1965, SONY placed the first black and white portapak video camera on the commercial market. The new technology granted easy portability, immediacy, low monetary investment, and for the first time, made video available to artists.1 Video historian John Hanhardt has noted that, at the time, the excitement surrounding the new medium was most keenly reflected in the early experimental works of Nam June Paik (1932-2006). This era in Paik’s career is also marked by his emerging interest in cybernetics.

Cybernetics emerged in the 1940s from MIT mathematician Norbert Wiener. Instead of viewing communication as a one-way ticket between cause and effect, Wiener looked at communication as a circular system of information exchange. His most well known example is a ship’s steering system, an example that echoes the Greek origin of the term, kybernetikos, meaning to steer or guide.2 While cybernetics eventually opened the doors to artificial intelligence projects such as smart bombs, smart planes, robots, and various other military “defense” technologies, Wiener has nonetheless maintained a sharp critical and ethical eye on the applications of the automated systems he doctored.

Wiener was not alone. In the 1960s and 1970s, Nam June Paik, and many of his pioneering video artist colleagues and Fluxus collaborators took the visionary work of Wiener, the electric prophesies of McLuhan and Gregory Bateson and the utopic designs of Buckminster Fuller and concurred that the new video medium would usher in a social utopia that would extend far beyond the spheres of the 1970s experimental art world. For these early media artists, the feedback loops, live circuits, and video flows, coupled with the electronic image’s immediate and physiological stimulations, when used in distinction to commercial models, posited potent possibilities for cybernetic consciousness, ecological human-machine systems, and an end to top-down power relations. In short, the rise of an egalitarian, democratic society through electronic media. In order to fully appreciate Paik’s work, we must remember this historical context. A solo show is now on view at the James Cohan Gallery in Chelsea, "Nam June Paik: Live Feed: 1972 -1994." The show features several of Paik’s older and more recent video installations, all of which reflect his cybernetic ambitions for video technology.

The first few pieces in the exhibition are animal-man-machine hybrids, a style Paik has been developing since the 1980s, with works such as the Family Robot series (1986). These robot pieces reflect Paik’s life-long interest in cyborgs (hybrids of man and machine), offshoots of cybernetic research. In 1996 Paik wrote, “Cybernetics is the exploration of boundary regions between and across various existing sciences.”3 Its fusions went beyond human beings to include animals, objects, and ecological fusions with machines such as Watchdog II (1997) -- a pun on an actual dog and the “media as watchdog” and Attila the Hun (1993).

Also in the show are Beuys Voice (1990) and Gertrude Stein (1990), two celebrity robots. These cyborgs both personify and mechanize the actual historical figures: Joseph Beuys, the conceptual artist, and Gertrude Stein, the modern writer. Stein wears a polyester translucent skirt draped around her waist. She has miniature television monitors for a belly, kneecaps, and shins, all of which emit an ongoing and colorful electronic glow. For breasts, two old records are installed onto the surface of her robot skin. Old victrola-horns are used for arms. 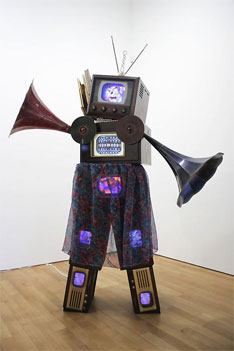 Where the Stein robot references Gertrude Stein’s actual work and writing (Stein wrote prose that emphasized sonic dimensions—for instance take the rhythmical sound of her well-known sentence “A rose is a rose is a rose”), the Joseph Beuys robot alludes to Beuys’ art works and persona. Beuys holds a bird in a cage--likely a reference to fellow Fluxus and conceptual artists Joe Jones, who made a self-playing violin in a birdcage. The felt hat resting on top of the robot head no doubt refers to the felt grey hat that Beuys is known for always having worn. The celebrity robots pay great respect to these immortal figures. As Donna Haraway declared in The Cyborg Manifesto, “I’d rather be a cyborg than a goddess.”4 One could only assume Paik would agree.

The mixture of old and new has always been at play in Paik’s work. In Stein, old media such as records, victrola-horns, and vintage television set casings form the structure of the robot-body. But inside these old and bulky boxes, newer and smaller monitors reside. It may appear that the newer television sets have been used to update the older ones; to preserve the installation for ease of display, but this is not the case. Paik has been housing newer monitors inside vintage casings from the start. This is confirmed by gallery owner James Cohan, whom I was fortunate enough to run into while visiting the gallery last week. The bulky-old boxes tell a story about the history of electronic and acoustic media--that the gradual miniaturization, democratization, and streamlining is something that we can only recognize retroactively.

Cybernetics is not just about human/animal-machine hybrids, but also about environments, ecologies and consciousness. TV Bed (1971 / 92), and Enlightenment Compressed (1994) are newer pieces that harp back to, and update, Paik’s earlier works. TV Bed, according to the gallery, is an ode to Paik’s muse’s Charlotte Moorman. Moorman collaborated on several pieces with Paik, including TV Bra (1975). Images of this wacky 1975 performance appear on the leg-monitors of the Gertrude Stein robot. 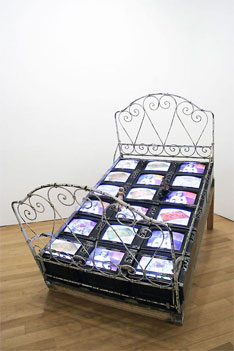 Paik is well known for transforming the architectural function of the television set from a mere box to an element distributed in space. However, these interventions must also be contextualized with his ongoing interest in cybernetics, a theory of animals and machines in their environment. In 1971 Paik asserted that today, the “nature of [the] environment is much more on TV than on film or painting. In fact, TV (its random movement of tiny electrons) is the environment.”5 TV Fish (2004) and Videochandelier X (1991), also in the Cohan exhibition, reflect this attitude. TV Fish involves a large fish tank filled with real goldfish. The goldfish swim about the tank as a television monitor flashes behind them. One gets the sense the goldfish move to the beat of the monitor’s syncopations. Videochandelier X decoratively distributes mini television monitors in an ornamental light fixture hung from the ceiling. Both tungsten light and TV light shine down on you from above. These pieces estrange the naturalized position of the television in the living room, or stand. Vision and viewing practices are stretched so that one sees an object in space, abstract colors, and patterns, before, and perhaps regardless of, the television’s content or cognitive meaning. 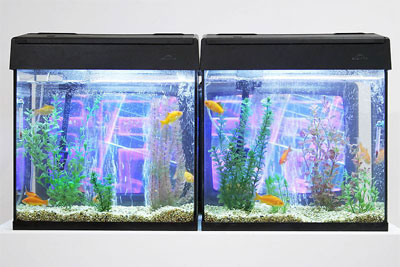 Further exploration of the new systems-thinking comes through in Enlightenment Compressed, a miniaturized version of the celebrated TV Buddha (1974) that is, in my view, the highlight of the Cohan exhibit. In both pieces, a live camera is placed on the front of the mini television monitor. The camera receives a feed of the image of the bronze Buddha statue in front of it. The circuit then feeds this image signal back into the television monitor, resulting in the Buddha’s image appearing on the screen in front of him. In video terminology, this is known as a “closed feedback loop,” meaning that the video signal and the image it generates are united in one circuit. In 1974 Paik reminded us that “two way television came before one-way television—from radar.”6 The Buddha installations show us what television could be--beyond the limitations of the one-way, top-down, industrial broadcast model. 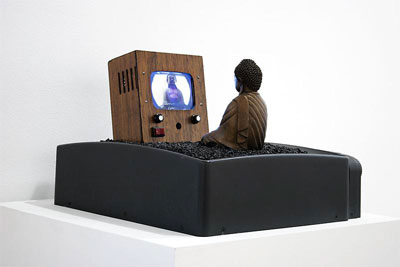 Enlightenment Compressed and TV Buddha function more as systems and networks that criticize the one-way flow of commercial broadcasting, and yet also offer alternative possibilities for television viewing, possibilities that have always existed with the technology, but have been suppressed by industry mandates. Canadian media scholar Marshall McLuhan provocatively argued in the 1960s that television sets are extensions of the human nervous system. When we are watching we are “plugged in”--creating a feedback loop that extends the body into the machinery, and the machine back into the body. McLuhan also drew on the myth of Narcissus to describe the televisual experience. Like Narcissus, one is so intoxicated and absorbed by the electronic image, he / she fails to recognize it is actually an image of oneself that is reflected back to them.7 Enlightenment Compressed and TV Buddha suggest that this mode of televisual experience is analogous to the practices of Zen meditation. For Paik, television provided an enlightening experience where one transcended the self--not in a mystical or religious way, but though the material technical system that was grounded in the real world. World as concept, mind as space.

Paik has since shown his work internationally in solo exhibitions worldwide. Venues include the Museum of Modern Art, New York (1977); The Whitney Museum of American Art (1982), Centre Georges Pompidou (1982); The San Francisco Museum of Modern Art (1989); The National Museum of Contemporary Art, Seoul (1992); and The Solomon R. Guggenheim Museum (2000). 8 He recently passed away in 2006, at the age of seventy-five. If you have not yet seen Paik’s work in person, the James Cohan Gallery is ideal for initiation. For those already familiar with his work, the exhibition is an opportunity to revisit important pieces from the artist’s long career. The show is open at the James Cohan Gallery, 533 West 26th Street, NY, through May 30, 2009.

You might also be interested in knowing that the Paik estate archive recently found a new home at the Smithsonian American Art Museum.

Compared to newspapers and journals, video is the best way to convey messages clearly. In social networking sites also having options to add a videos.