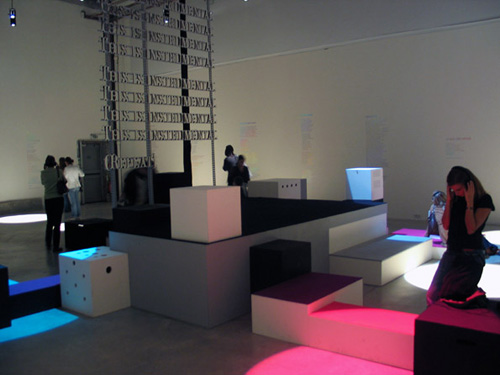 Afif has chosen the Palais de Tokyo as the last stage of a project that he has been working on for months. "Lyrics," his "sung retrospective" at the Palais de Tokyo, is an extension of the shows "Melancholic Beat", presented at the Folkwang Museum in Essen, "Down at the Rock and Roll Club" for the Moscow Biennial, and his exhibition at Albi's Centre d'Art Cimaises et Portiques of Albi. It is certainly a far cry from a classic retrospective. For each of these shows, the artist has invited a composer to "translate" into music his earlier installations, pushing to the extreme the potential of translation and re-creation of his work "in song."

Afif produces these songs as works of art by integrating them visually into the exhibition space. The lyrics cover the walls and visitors can listen to the songs on headphones. An installation made up of various materials scavenged by the artist from the holdings of the Palais de Tokyo will also serve as a stage for a concert scheduled to be performed the evening of the show's opening. Having drawn up a list of precise instructions, Afif commissioned various authors to write texts, then got the word out to musicians. Afif interpreting, interpreted, and reinterpreting his own work, which gives rise to a constant back-and-forth that certainly shakes up our perception of art.

-- FROM PRESS RELEASE FOR THE "LYRICS" EXHIBITION AT PALAIS DE TOKYO