A Studio Visit with Gareth Long
By Ceci Moss

Last week, I met with artist Gareth Long at his Brooklyn apartment for a studio visit. I first became aware of his work through another artist Tyler Coburn, who wrote about him for Rhizome. After training in video for many years, Long turned to sculpture as a means to push video's formal qualities, illuminating the porousness of the category in relation to other mediums. His renderings of video into alternate forms, such as lenticular prints or digitally fabricated sculptures, often succumb to the faulty interpretations and limitations found in the slippage between languages. His book-based works pick up on this topic, functioning as artifacts of mistranslation.

Gareth had only recently moved in and, like many New York artists I know struggling with space and financial restraints, his artwork also doubled as his décor and furnishings. (Thankfully, his sculpture-slash-desk Bouvard and Pechuchet’s Invented Desk For Copying can also be used as an actual desk.)

He began the visit by discussing It's Hard to Dazzle Us (2006). A set of large lenticular prints of the Challenger disaster, three of the five stood against the wall of his kitchen.

As you walk by the prints, plumes of smoke slowly rise, expand and disperse against a vivid blue background. The works, while deriving precisely from the iconic footage, draw out the scene in such minute detail that the original content becomes obscured. Gareth explained that the movement captured in a single lenticular print is equivalent to roughly 30 frames of video. As an artist concerned with the formation of narrative structure, Gareth found these durational constraints useful in his research. The medium forces him to select images with care, but the narrow focus also ultimately leaves the viewer to discern their content and logical progression. For an event such as the Challenger Explosion, the story is already well known but when presented in this fashion, may not be immediately perceptible. I asked him if the images in It's Hard to Dazzle Us registered as the Challenger explosion when exhibited. He responded that the majority of viewers did recognize the ensemble, although one print particular, featuring a vertical trail of smoke forked in two directions (not pictured above), seemed to resonate more strongly than the others. The title It's Hard to Dazzle Us is an excerpt from Ronald Reagan's speech after the disaster, in which the former President applauds NASA's technological prowess and its enduring ability to capture the attention of a twentieth century public. Thus, the work can be read not only as a close investigation of an exceptional event and resulting image, but also the modalities that inform a notion of monumentality.

Video Solid is similarly directed at interrogating the lasting imprint of certain images. Walking into the living room, Gareth brought out an example of the small 8 x 8 3D sculptures that comprise a portion of Video Solid.

The sculptures derive originally from a video he discovered on the internet, which he played for me on his laptop. Digitized from VHS, the clip follows a group of hunters as they successfully kill a lion. The credits, which provide the date of the hunt and the names of the hunters, allude to the fact that this tape is a diary of conquest, and as a document, functions much like a trophy. In the last scene, the lion lunges at one of the hunters just as he shoots and kills the animal in mid air. Perhaps acknowledging the Hollywood-like quality of this moment, the amateur cameraman slowed down this segment to accentuate the drama. Gareth explained that he used stills from this video as the basis for 3D sculptures created on a 3D printer. Using a software program that he developed, the luminance contained in each shot would then translate into the uneven surface on the blocks.

A computer and a 3D printer produce the sculptures on site, and this process is very much a part of the work. Gareth mentioned that a reviewer once described Video Solid as an exercise in "technophilia" because of the imposing presence of the 3D printer. However, the work is less a bravado demonstration of machinery than a presentation of the image's transfer and degradation through various mediums. The final output -- jagged, abstract white blocks -- is then laid out on a large rectangular display, giving the small sculptures the air of a coveted trophy-like object. But the distance between the white blocks and the footage depicting the lion's death inserts an alienating effect by diminishing the image's ability to stand in as a emblem asserting the hunter's strength over the lion, and its presentation only furthers this result. 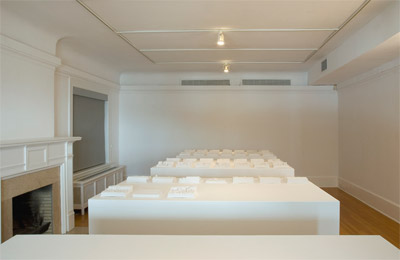 Gareth's book projects similarly deal with the effects of degradation, with an emphasis on language and speech. As a Canadian living in the United States, Gareth remarked that Americans would often assume that he spoke French. Although he learned the language in grade school, he professed that his abilities are really quite limited. During the height of the American fixation on the war on terror in 2006, Gareth produced the book edition Les petites histoires terrorists in which he writes a short story in French about the FLQ. Errors and misused tenses run throughout, making the text a testament to Gareth's own displaced position vis-à-vis expectations regarding his Canadian-ness. His national identity comes up again, although in a less pronounced way, in Untitled (Stories). For the project, Gareth began by removing all the text from the covers of J.D. Salinger's novels by hand. He then used this design to create a large lenticular print, which he has exhibited alongside the effaced books.

Gareth informed me that, as a Canadian, he was not required to read the books in high school, and only encountered them much later. He recounts feeling drawn to the design because of its ability to stylistically echo geometric abstraction and minimalism; a decision that he feels is at odds with the content of Salinger's books. Gareth said that he attempted to research the designer and the decision process that went into the book, but was unable to unearth much information. Instead, we're left with this curious product, recognizable to many despite the removal of its title.

Gareth concluded the studio visit with a special treat - his personal collection of lenticular prints. See below for a few of my favorites.