Permanent Junk For a Changing World
By Marisa Olson 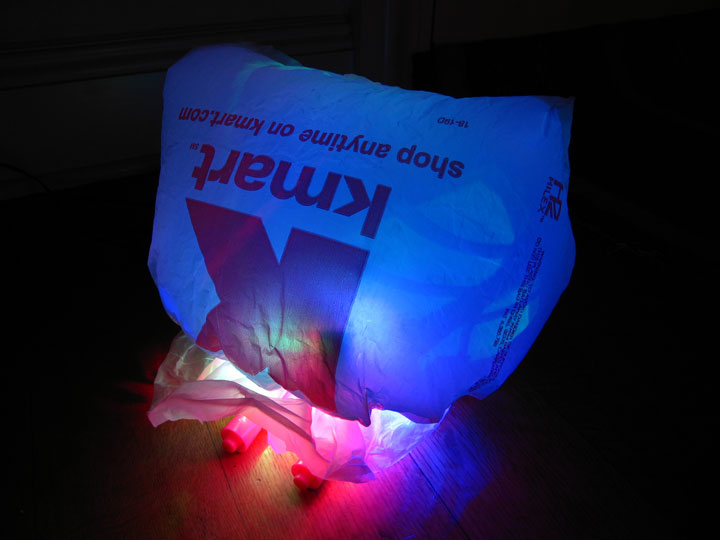 Let's face it: A lot of new media art is mystifying. Shih Chieh Huang's work is mesmerizing. Of course, his installations have much in common with other media art. They light-up and like to be exhibited in dark rooms, they often employ electronic circuitry and robotics, and they are dynamic rather than static--his works move, blink, and make noise. But it somehow seems just as appropriate to connect Huang to the vocabulary of kinetic art (where there have indeed been many media innovators) than to link him exclusively to interactive art. Typically, his work is only interactive insofar as it stimulates deep visceral and emotional responses, but then by that barometer we might as well acknowledge that all art is potentially interactive... In Huang's work, the subject of high technology is perhaps even more important than using high tech media. The artist is a big fan of dollar stores and recycle bins. He collects cheap toys, plastic water bottles, and small, often overlooked colorful trinkets to assemble into what often feel like synthetic life-forms. A series of neon zip ties become a prickly spine for a shrimp-like character, while glowing wire tendrils embody other sea creatures' tentacles. Throwing in a little colored water, some LEDs, and plastic bags that appear to breath (earth, wind, and fire, anyone?), Huang gives us a candy-coated reflection of the media ecology many of us fail to see. In his current solo exhibition, entitled, "Connected: Eject before disconnecting," at the RISD Museum of Art through June 21st, the artist invokes the kind of right-under-our-noses, generally unspoken yet totally commonplace messages associated with personal computing. By doing so, he connects the excess, throwaway, permanent junk that comprise his environments with the ever-evolving technological culture that propelled their invention, existence, and eventual abolishment to the pre-landfill purgatories known as dollar stores. But one doesn't need an excuse as highfalutin as observances of the relationship between high tech culture and low-level materials to see Huang's show. Go ahead and see it for an old-fashioned reason: beauty. For all their complexity and intricacy, the artist's installations are simply beautiful. - Marisa Olson