It's Getting Hot in Here
By Marisa Olson 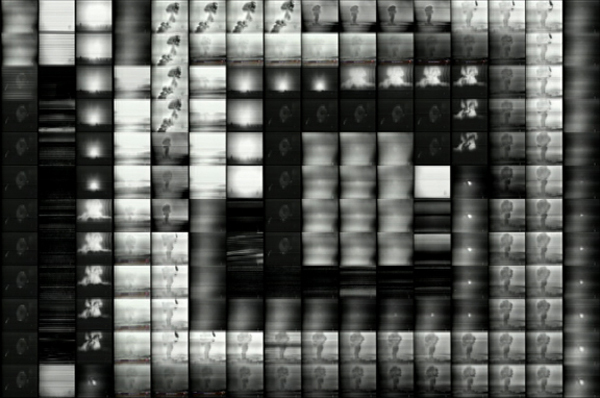 Claudia Valdes refers to her work as "a rehearsal for the end of the world." The New Mexico-based artist employs photography, performance, video, interactive installations, and painting to address the subject of nuclear weapons. In her first solo exhibition, up now at Seattle's Lawrimore Project, she dials-in on the specific period of our nuclear history that followed 2001 (i.e. 9/11 and the ongoing war in Iraq), to trace the evolution of the bomb in the popular imagination and the rhetoric of holocaust and apocalypse in the present. Entitled "Ten Million Degrees," the exhibition includes many formal variations in different media, all of which initiate a tension between documentary, archive, and performance. By recreating nuclear test blasts in Turner-like watercolors and processing snapshots and video clips to channel radiation and frenzied vibrations, the artist stands between past and present in gauging the temperature of viewers' historical understanding. In fact, in her video installation, Revelation 2213 (2009), Valdes inserts viewers into public domain footage of nuclear tests through real-time chroma keying of gallery-goers' images. The artist performs her own escape fantasy in Minutes to Midnight, a ten-minute video that distends Super 8 footage of her public performances at New Mexico's Trinity Test Site. In the spirit of the science fiction genre her work recalls, Valdes traces the fears and dreams associated with technological evolution in the performance, which was repeated over a two-year period, thus sliding between historical event and historiography. These and other works are on view through March 14. Readers with a special interest in nuclear themes might also visit Joy Garnett's Bomb Project, which includes digitized historical records, images, and documentation of other artists' projects, including Michael Light's re-photographing project, 100 Suns. - Marisa Olson