He Blinded Me with Science
By Brian Droitcour 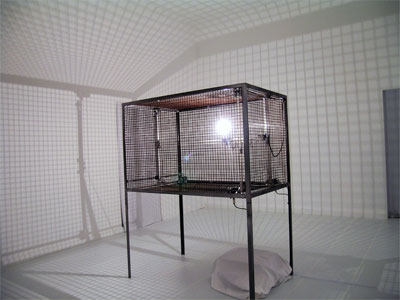 In an interview in the Village Voice ahead of his current show at Location One, British artist Conrad Shawcross called his Slow Arc Inside a Cube an analogy to Plato’s cave: “the idea that visible reality is only a small crumb of what's really out there.” As a lightbulb moves on a mechanical arm inside a cage, it throws the cage’s gridded shadow across the white walls of the enclosed space that contains the installation, creating the sensation that the room is expanding and contracting as the viewer stands within it. The grid is simultaneously a solid object (the cage) and its fluid trace (the shadow). Could Slow Arc be a wry joke about the white cube and the grid, those two pillars of modern art? Perhaps, but it is primarily a study in reality and tangibility. Lattice Cube IV and Lattice Cube II, two other sculptures at the exhibition, are both segmented, hinged boxes in different forms of expansion, like a moving object caught at two moments in time. Dumbbells are machine-made drawings that trace the frequency of a major sixth, and The Celestial Meters are an homage to the Earth meter, devised in 1799 based on an incorrect estimation of the distance from the equator to the North Pole. Shawcross determined the length of his eight sticks through similar calculations, but for each one he took data on the planet whose name is inscribed in the metallic stick. Shawcross’ work recalls that of Olafur Eliasson, who uses simple geometric and kinetic structures to elicit a sense of wonder about light, optics, and nature. But unlike Eliasson, Shawcross foregrounds the role of the scientific imagination in shaping perceptions of the world. 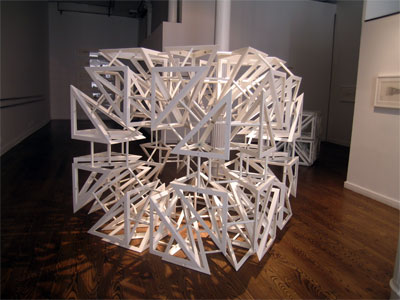 Very interesting to see how the shadow itself creates a unique piece of art!