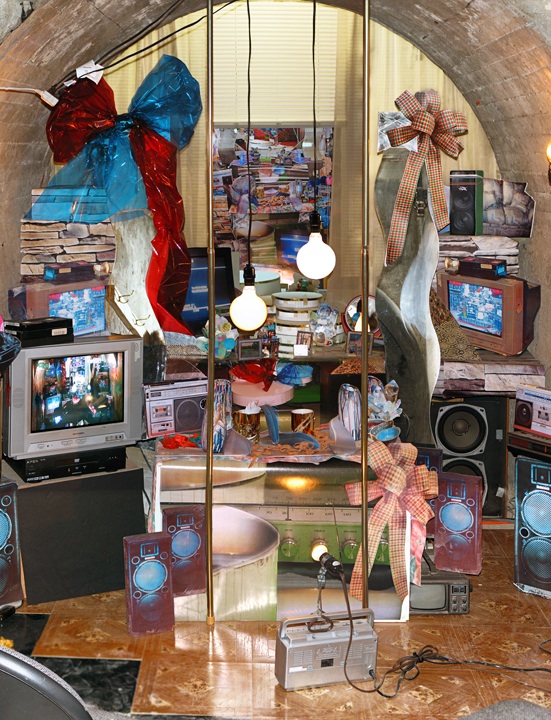 Samara Golden’s colorful, multifaceted video and sculptural installations have been popping up quite a bit in New York City recently. Earlier this year, the artist’s "Yes no party" was set up within an alcove in the basement of the Sculpture Center in Queens as part of the group exhibition “In Practice Winter '09.” Golden then presented her sculpture "There's more but it's invisible" at Columbia University’s 2009 M.F.A. Thesis Exhibition, and this piece is now on view at the Project Room at Marvelli Gallery in Chelsea until June 27. I spoke with the artist at the Sculpture Center and then at her studio, where we discussed her interest in combining video and sculpture, her incorporation of images culled from image searches on the web into her installations, and more. - Chloe Gray

You surf the web for images to incorporate into your installations. Can you talk about your surfing methodology?

Sometimes I start by typing in a broad term like “messy room,” and when I find a good picture I take elements out and print them, such as a lamp or a vase that I like. In other cases I use the "messy room” picture to help me figure out what I’m looking for; I like the mirror in the picture, so I search for “unique wall mirror” and see what I can find. It's very fun, like making an immediate wish list for a 2D thrift store.

On another level, I’m interested in what photographers call “gaining access”: the ability to have access to other peoples lives. Using the internet allows me access without interfering. Photographers often have to consider these issues because there is an implied responsibility to their “subject.” I’m interested in the idea that I am just looking at what the subject wanted me to see, and then using it to make something new.

Yes, and I follow the golden rule. It would be interesting if someday someone would want to recycle a corner of a photo of one of my sculptures to add to their hovering jelly mass sculpture of the future.

Where do you get the other materials used in your installations?

Primarily from thrift stores. I've been a thrift store addict forever. I can completely wear myself out looking around in thrift stores; I can’t stop. Last week I was at the Goodwill on 123rd street, and I overheard a guy explaining that when he gets a break from work he rushes over to look at the racks of clothes arranged by color. He said its “color therapy.” I agree.

This winter I got to go to Germany to do a show. There they have something called “Sperrmüll,” which literally means “bulky waste” in English. One night a week they put things that they don’t want on the curb and anyone can take them for free. I made most of my installation, called Penumbra II, out of German refuse. It was great, and free.

What inspires you to mix printed photographs of objects with real objects? Is it a play between "reality" and "illusion"?

I think about time and space a lot in terms of the fifth dimension: the idea that more than one thing is happening at once in one place. Not being able to decipher and define a finite reality is part of the reason I put real and printed objects together. My goal is to create a place that makes you question what you are seeing as well as experience the piece without allowing you to find a quick answer. Also, on another level, I believe in someone's artwork being a reflection of their life. I started printing objects from eBay when I didn’t have the money to buy them and quickly found this to be a satisfying way of being a consumer and also being an un-consumer. Like being a faux shopper. 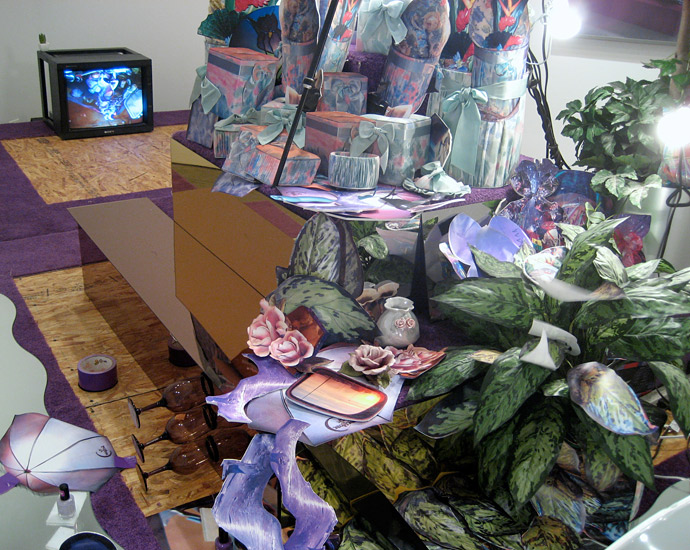 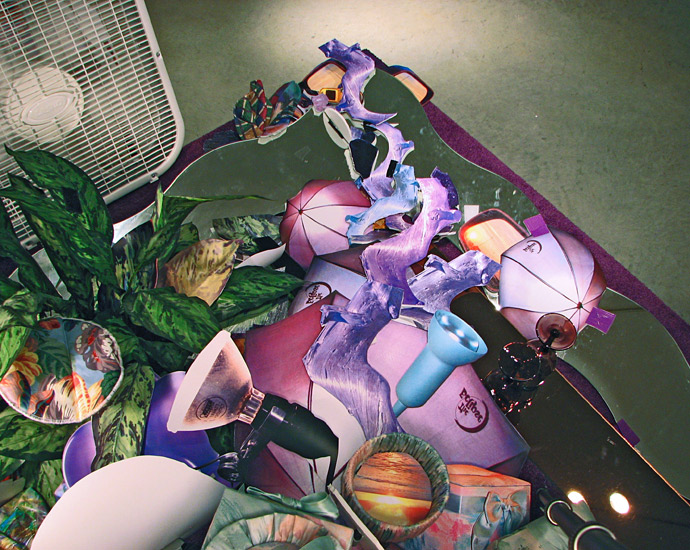 When we spoke at the Sculpture Center you told me that you were influenced by Brian Bress' photographs. Can you describe what about them inspired you? What aspects of his work relate to your work?

I was introduced to Brian Bress through a friend; he stopped by for an impromptu studio visit when he was in NYC (he lives in Los Angeles). At the time we were working in similar ways. I was making room sized installations that were meant to be seen from one singular vantage point, and using physical illusions to create what I termed a sort of “physical photoshop.” I was also taking photographs of the installations at that time. Brian is a master of working this way; he makes visually complex and unique set-ups and then takes photographs of them that blur the lines between objective reality and illusionistic representation. He also makes videos that are awesome. I would say that we were both using the idea of illusion and the 'breaking of illusion' in our work, but in different ways. At that time Brian was using the photos as the final artwork, and not showing the installation. For me, this was the beginning of my wanting to show both the actual physical installation and a framed or mediated version of it.

You previously told me that your ultimate goal to is to make a sculpture in which the video elements and the more traditional sculptural elements depend on each other completely. Is this a good way of phrasing it? Can you elaborate? Do you feel like any of your works have achieved this or come close to achieving this?

My way of saying it is: I’m trying to make a sculpture that needs a video, and a video that needs a sculpture, allowing for one to complete the other. I'm also thinking about how the viewer can be a part of this circuit, so people can see themselves as part of the sculpture while they look at it.

When I first got a video mixer I was making what I called “Green-Screen sculptures.” Through these experiments I think I was able to achieve some interconnectedness between the two mediums. Those experiments coalesced into the installation Yes no party. To answer your question, I’m satisfied with working toward this weird goal, but I think the project has just begun. Then again, I’m never fully satisfied; I think of it as future thinking.

How does your thesis project There’s more but its invisible build upon the ideas seen in Yes no party? In what ways does it depart from your previous projects?

Yes no party functioned like a display or a facade that a viewer looked at but was excluded from entering. In contrast, the sculptural part of invisible functions as an all-in-one; it is both a “display” and a place to sit, meaning that on one side of the carpeted structure you can sit, while the “display elements” are velcro'd to the other side. In invisible you can also walk around the installation and in between the sculpture, monitor, and photograph on the wall.

You could say that There's more but it's invisible is a self-reflective sculpture looking at itself; the sculpture has its own self-portrait on its wall and is watching itself on TV, both of which are ways of generating a mediated sense of self-identification. These processes reinforce and break down the object as a sovereign being, as the sculpture becomes less of an object in its own right, and more of a subject of its own narcissistic gaze, searching for legitimacy in the act of communication. Also, in There's more but it's invisible I was thinking more directly about the idea of past, present, and future. I thought the sculptural part could be considered the "present" because you physically interact with it while the portrait photograph could be the "past" because it already happened, and what you see in the monitor could represent the “future” because it is still undefined. I’ll explain further: what you see in the monitor is a combination of a video I made in After Effects and live video of people looking at the sculpture. This part of the installation is the most interesting and challenging to me, as it doesn't belong to any one genre, discipline, or medium. Creating the image in the monitor allows me to use my understanding of sculpture, collage, photography, and cinematography. In both pieces I'm especially interested in the ways in which the viewer is implicated in the work without choosing to become part of the work, perhaps similar to how we can feel, in our daily lives, guilt by association and implication by existence.

Yes no party seemed to be very intertwined with the alcove in which it was situated, while your thesis project seemed to be more self-referential or self-contained (but perhaps that’s because I’ve only seen it in your studio). To what extent do your installations respond to the space around them, and to what extent do you consider them independent, transferable entities?

Yes no party was a very site-specific piece, and I made There's more but it's invisible to be a discreet and transportable piece. I’m interested in working in different ways and in expanding my abilities. I’m very attracted to working in a site-specific manner; it can be very inspiring. But I also like the idea of making autonomous pieces that are transportable by nature; in fact, lately I’ve been trying to figure out how to make sculptures that are collapsible. 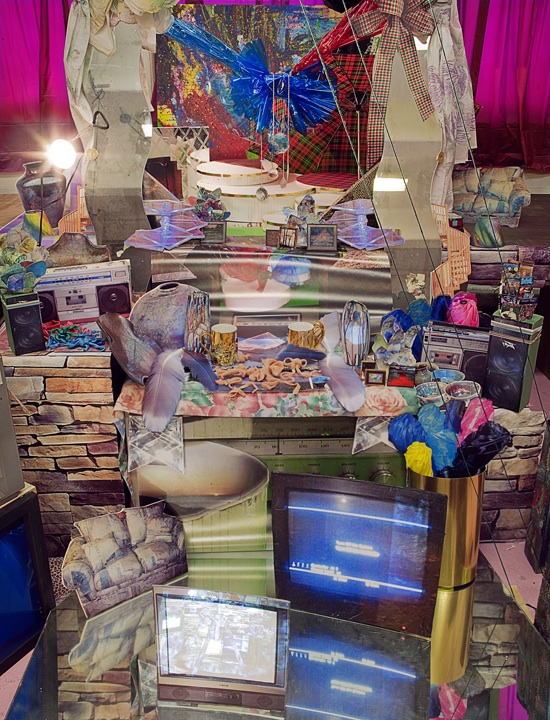 You mentioned that people have described your work as having a “1980’s aesthetic,” with its mix of bright, pastel and neon colors and materials that carry eclectic patterns. Do you think that this observation reflects your intentions? In other words, are you intending to recall a specific decade’s style through your work?

No, that is definitely not my intention. The way I see it, I’m just using the items that other people don’t use anymore. Everything you find in the thrift stores is out of date, and everything of date reminds people of the 80’s. I love pattern, texture and color, so naturally I am attracted to some materials from the 80’s. I love a handmade ceramic ashtray as much as a mass-produced kleenex box cover. I probably do have a sincere feeling toward things that I have seen before, because things are so telling about how we live and they can remind you how much you loved or hated a situation. I also like the idea of combining these objects in strange ways.