On Networked Equality
By Brian Droitcour 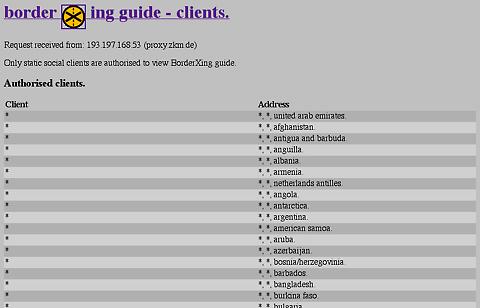 The afternoon of May 30 was clear and sunny, which probably accounted for the low turnout at the New Museum’s panel discussion Networked Equality. Too bad, because the presentations were engaging and generated a lively Q&A session afterward. More than a month later, the topics raised still seem worth discussion, especially in light of the ongoing conversation about political art and the content of Rhizome’s coverage. The speakers at Networked Equality were researchers, activists, one-time dot-com entrepreneurs and self-described nerds Ethan Zuckerman and Omar Wasow. Zuckerman discussed how the internet’s vaunted potential to increase the flow of ideas across borders of nation, race, and class had been stunted by homophily, the tendency of people to stick to like-minded groups. His project Global Voices is one effort to counter that inclination by aggregating and translating independent media. Wasow, an education specialist, emphasized that access to technology would not narrow the gap between classes, and education was the key to helping disadvantaged segments of the population become participants in a networked economy.

Zuckerman is a fellow at Harvard’s Berkman Center for Internet and Society, where he said his older colleagues—academics who already had established careers when the internet appeared-- greeted networked technologies enthusiastically, predicting earth-shattering change and falling borders. To the contrary, Zuckerman and Wasow’s peers, who helped build the early internet, approached it with a healthy skepticism. This attitude resonates with some pioneering net art works, such as those of Heath Bunting and Daniel Garcia Andujar who reacted sharply to utopian views of networked technologies. BorderXing, Bunting’s project with Kayle Brandon, offered a database with instructions on how to cross borders illegally, but limited access to that database; the project showed literally how political borders were in fact permeable, and computer networks could be just as restrictive. Andujar’s series of projects under the banner of “Technologies to the People” challenged assumptions about the freedom of the internet by investigating who actually owns or distributes knowledge online. In cross the border, Olia Lialina writes: “the easier money and goods flow across the territories of nations, the more western europe and united states close their doors to migration.” Her net drama Agatha Appears addresses the issue more obliquely, partly through the gender dynamics between naïve Agatha and the savvy male systems administrator who “teleports” her back to his apartment.

Networked Equality was one of a series of talks organized in conjunction with the recently closed “Younger Than Jesus,” which noticeably lacked explicitly political art in the vein of the examples given above. In a recent post to the list Curt Cloninger wrote: “I do think the current interest in "formal" work is a reaction (whether intentional or subliminal, probably both) against an overly politicized/pragmatic/moralizing dialogue that has often (in some circles) surrounded new media art.” Could it also be because euphoria over the internet’s border-shattering potential has faded as it has become integrated into daily life? Are there any recent art works related to the topic of Networked Equality worthy of note? Please post links in the comments.

what is meant by "Networked Equality"?

"Networked Equality" is the name of the event, so by "the topic of Networked Equality" I meant the topic of that panel discussion. I summed up its contents in the first paragraph, but if that's unclear, I'll rephrase. The discussion was about networked technologies' supposed potential for creating equal educational, economic, and professional conditions vs. how the actual use of the internet usually fortifies divisions of class, sex, national origin, etc. The works I listed in the second paragraph address those issues. I was asking if anyone knew of more recent ones that do. So far the answer seems to be no.

It seems a false or forced dichotomy to talk about political art vs. formal art. If artists describe themselves in these ways, then they kind of skew critics into interpreting their work along these lines; but at least since phenomenological art (and probably prior), formal moves have had "political" implications. Deleuze/Guattari talk about content and expression each having their own formal qualities. It's not like expression is always conveying content, or that content is always the source material of expression. It's always been more complicated and refracting.

So maybe any formal work that is totally devoid of any socio-political implications is just bad art, and any political work that is totally devoid of any formal or aesthetic implications is just bad art. Or, more likely, such work is "badly described" art or "badly contextualized" art, because it is almost impossible to make formal art without some "cultural" implications or political art without some "aesthetic" implications. The sooner all artists get this, the more interesting, subtle, affective, and relevant everyone's art will be.

To answer your question, some of the recent proposals for the Rhizome commission that I read fall into the category of bad, overtly "political" art. It's like the artists are specifically obliged to begin with some "hot topic" at the intersection of technology and politics, rather than starting with their studio practice and letting it lead into whatever topic areas it leads (hot, passe, banal, medieval, indifferent).

I missed the panel you're talking about, so maybe I'm missing your point, but don't most of this year's Rhizome jury awardee projects touch on "political" topics?:
http://rhizome.org/commissions/

Here I argue that Kevin Bewersdorf's work is "political":
http://lab404.com/articles/commodify_your_consumption.pdf
But you've got to read the whole article to understand why this is so.

I didn't try to establish a dichotomy, and I think you're reading that into the post because words like "political" or "formal" can suggest an implicit opposition. I realize that's a danger of using such words, but nonetheless I think they can still be useful for discussing work. (I'm guessing you feel the same way, since you used "formal" in the above quote of yours I took but put it in quotes just to be safe.) I agree that several of the Commissions have overt political concerns, but here I wasn't talking about political art in general, I was talking about artists addressing the idea of the internet as an equal socioeconomic field. Maybe one could argue that Jeff Crouse's Crowded (http://www.jeffcrouse.info/news/crowded-rhizome-proposal/) does, but it seems like a stretch.

Thanks Brian. That clarifies what you are asking. It is useful to boil things down from the vague "political" to the more specific "idea of the internet as an equal socioeconomic field."

As you point out in your article, even people making net art in 1995 (Heath, Daniel, and others) weren't naive enough to buy into the Wired utopia of the net as an equal socioeconomic field. McLuhan says that's what artists do – they are harbingers and pioneers for everyone else; artists figure out what new media are actually good for and how they pragmatically/culturally work. This exploratory function always implies criticality.

You also suggest that the reason artists aren't currently debunking the myth of networked socioeconomic equality is because we are more used to the net as a normal medium, so artists are asking different questions. Yes. Critiquing that myth is a move that has already been made. Not that the same move can't be made again and again (people are still making interesting work derived from the topical/canonical dead horses of telepresence, non-linear poetry, post-human cyborgism, artificial intelligence, surveilance, etc.), but the same moves can't be made again in the same blunt/epic/heroic ways. You can't put a urinal in a gallery again without some sort of remix/irony/twist. So everything gets more subtle, and also more derivative.

Regarding more specific contemporary examples of art that criticizes the myth of socioeconomic equality on the net, I think the Jeff Crouse proposal you cite ( http://www.jeffcrouse.info/news/crowded-rhizome-proposal/ ) is a fine example of just such criticality; with the caveat that it is necessarily less epic/heroic/all-encompassing/blunt than Andujar's "Technology For The People." Michael Mandiberg's "Mechanical Turk" proposal this year touches on a similar topic ( http://www.mandiberg.com/tag/mechanical-turk/ ). Aaron Koblin's "Bicycle Built for Two Thousand" is another example ( http://www.bicyclebuiltfortwothousand.com ). Here is a funny and related Ze Frank "piece" ( http://www.buzzfeed.com/zefrank/hardtimes-outsource-13 ). All of these pieces critique the "idea of the internet as an equal socioeconomic field," while doing several other things besides. And if any of these pieces succeed as "good" art, one reason is because they aren't reducible to simply being "about" a topic.

That "Bicycle Built for Two Thousand" piece does succeed. The title is right clever. The source song is about Victorian technology enabling a quaint one-to-one Colonial intimacy, which then gets Kafkaesquely modulated into a curious and unsettling swarm/hive of emergent post-colonial utterance(s). (As noted in the artist statement, the source song is also the first song used in computer voice synthesis experiments and it was sung by HAL as he regressed toward his "infancy" in 2001.) The "Bicycle Built for Two Thousand" piece works as an "aesthetically" intriguing/beautiful/sad/strange piece of experimental composing (visually/notationally and interactively as well as sonically), and in a way that is not unrelated to its border-crossing "topic." The piece is "about" the Tower of Babel, about globalization and imperialism, about the irreducible/untranslatable/unprogrammable aspects of human affect, about the line between pure affective enunciation and the encoded "meaning" of language, and ultimately about the loss of personal intimacy. But the piece succeeds as good art not simply because it is obligatorily "about" all these topics (otherwise this post would be art). Listening to the piece actually makes me feel confused, sad, and slightly terrified in ways related to all of these topics.