“[E]xperience is not arrayed before me as if I were god, it is lived by me from a certain point of view; I am not the spectator, I am involved, and it is my involvement in a point of view which makes possible both the finiteness of my perception and its opening out upon the complete world as a horizon of every perception.”

Artist Dan Graham (born 1942) has embraced a wide range of media and genres including film, video, performance, installation, architecture (he collaborated with Jeff Wall in 1989 to build Children’s Pavilion), women’s magazines (Figurative—made in 1965 and reproduced in Harper’s Bazaar in 1968), and rock music (where he has collaborated with musicians such as Glenn Branca and Sonic Youth). Graham is well known for his documentary Rock My Religion (1982-84), a fifty-two minute video that explores the religious and spiritual tendencies underlying the American obsession with rock music. In the exhibition catalog for Don’t Trust Anyone Over Thirty, Diedrich Diederichsen claims that this video is “one of the most important texts on the theory of rock music.” Rock My Religion, as well as many other of these interdisciplinary projects are included in Graham’s current solo show, Dan Graham: Beyond, at the Whitney Museum of American Art in New York City.

Alongside his versatile practice, Graham has also been influenced by a wide variety of thinkers. Chrissie Iles lists these as including the literary, anthropological, and scientific fields, such as the writings of Jean-Paul Sartre, Gregory Bateson, Herbert Marcuse, Kurt Lewin, Wilhelm Reich, and Margaret Mead. The show at the Whitney takes account of these multidisciplinary footholds to great success, but for this review, I will focus on a particular niche of Graham’s work: his early performances and video installations from the 1970s, and the topical issues of performance art, the human body, and holistic perception that accompanies them.

The Merleau-Ponty quote noted above, according to Rosalind Krauss in “The Cultural Logic of Late Capitalist Museums,” marks a “radically contingent subject” that is caught within the horizon of unfolding, yet fragmentary, perceptions. For both, this seemingly paradoxical point of view is also indicative of an orientation in the world that prioritizes the body as the primary vehicle for experience and knowledge. This premise, it seems to me, is also one that underlies Graham’s early performances, and is evident Two Consciousness Projections(s) (1972), Public Space / Two Audiences (1976) and Opposing Mirrors and Video Monitors on Time Delay (1974), all of which are included in the Beyond exhibition.

In Two Consciousness Projections(s) (1972), documentation of which is on display at Whitney, the bodies of two participants, and the audience, are the subject and site of the artwork. In the piece, a naked woman is seated in a chair, facing a monitor that displays her image on it, in real time. The image is being transmitted from a man who is fully dressed and stands in front of her, holding a video camera. He is positioned behind the monitor. As the woman watches the live feedback image of herself, she tries to articulate to the audience what is going on in her “conscious” mind. The man, whom she does not know, also begins describing what he sees as he watches her through the camera lens. The audience is perpendicular to them, watching and listening to both performers and the monitor. 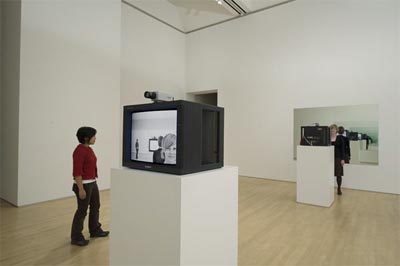 Two Consciousness Projections(s) demonstrates that even in one mind, consciousness is already multiple. Not only is a discrepancy between internal thought and verbal articulation exposed, but there is also an inconsistency between the girl’s visual reflection and her internal dialogue--while it may not be obvious, it is the starting point for the fragmentation of perception in the piece. Secondly, the fact that the man and woman influence each other’s perception and reality, through a live, mediated feedback circuit, is doubled by the fact that, as Graham describes it, the “audience performs as a superego.”

Chrissie Iles, in her essay “You are the Information: Dan Graham and Performance,” published in the Whitney’s exhibition catalog for Beyond, has contextualized this performance as a feminist one. She writes, the performance “disrupts the traditional dynamic between male and female. The female deflects the male gaze by commenting on her own live image, thereby altering and potentially controlling it.” Made at the height of the women’s liberation movement in 1972, Graham suggests, also in Iles’ essay, that the woman in the piece is indeed “more powerful than the man, as her subject and object are not separated. Whereas the more the man (to himself) strives to be objective, that much more does he appear to be unconsciously subjective to any observer on the outside.” This sophisticated notion delineates the distinction between the subject and object positions, yet also maintains that they are still connected. The paradox of being both one and many is pushed further in a second performance of the piece in 1975 at NSCAD, where both male and female performers are in the nude. This alteration effectively inverts the traditional art historical signifiers of the male gaze, while also maintaining them. Both male and female play object and subject, to themselves and for each other.

Beyond issues of feminism, Graham’s use of naked bodies is a recurrent motif. Iles suggests this has come as a result of his own experience in forms of body therapy, and in particular, from having undergone the therapy of Wilhelm Reich, whose techniques, she notes, sometimes involved “seeing patients in the nude.” A strategy that was no doubt in tune with the general tendency of the era; to view bodies and behaviors as forms of expression and communication systems, such as found in the work of Bateson, Mead, and even at the crux of Wiener’s cybernetics. Graham’s interest in bodies, people (performers, audience members) as communication systems equally reinforces Merleau-Ponty’s notion that it is by way of one’s physical involvement in a situation that makes perception and knowledge possible.

In this 1970s milieu, new electronic technologies also garnered an opening of perception in space and body consciousness. For Graham, this multifaceted human-machine vision was found with the then new media of video. This motif appears in both Public Space /Two Audiences (1976) and Opposing Mirrors and Video Monitors on Time Delay (1974 / 1993), both of which are fully reinstalled at the Whitney.

Opposing Mirrors uses the body to perceive and understand in a different, slightly less aggressive way than Two Consciousness Projections(s). The piece consists of two cameras set on top of two television monitors. Both the camera lenses and the monitors face a mirror. Each mirror-TV-camera system are positioned at two opposing sides of the room. So if I stand behind, but just to the side, of one monitor, my reflection is still caught in the mirror and the camera lens picks up the image. The cameras are also programmed to transmit their images to the monitors on five-second delay. Because of this delay, visitors could stand in front of one camera, not see themselves, and walk away. However, the person following them in line, as was the case when I visited the installation, would see their picture, and not my own. Not only is the expectation to see an image of myself undermined, but when an image of someone else appears on the screen, a strange collision and unexpected form of communication is elicited.

The piece does not use video feedback for its material or technical qualities. Instead, video is used as a vehicle for social communication--to rupture the normative silence and distance between strangers in a museum or gallery setting. In place of the presumed alienation between strangers, the installation’s capture and delay sets up a system of salutations between visitors. It is an enforced, non-verbal communication that breaks perceived boundaries in favor of proliferating connectivity, turning a line into a loop.

The myth of autonomous and isolated subjectivity is also undermined in Public Space /Two Audiences (1976), an installation that consists of a four-sided room with large ceiling-to-floor mirrors set up on two opposing sides of a room. In the middle is a thick transparent glass so that you cannot walk from one side to the other, and in each half of the room is a door to go outside, and back into the gallery. The instructions outside the installation instruct viewers to stay in the room for ten minutes.

Almost immediately after entering the space, the sounds of the museum disappear, bright white walls enclose you, and only the people on the other side of the glass can observe you--and you them, resulting in discomfort for those inside. I did not meet the ten-minute requirement. I quickly discerned that I was supposed to become a performer for the “audience” on the other side of the glass wall, while they were to become an audience for the people on my side of the glass. Public Space /Two Audiences is reminiscent of observation booths, where a hidden observer watches people. Yet in this case the power dynamic, as in Opposing Mirrors, is simultaneously upheld and inverted, as all visitors were made observers and subject to observation. Public Space /Two Audiences, also very much like Opposing Mirrors, places viewers in direct contact with the outside, without language, and only the visual façade to negotiate. All three of these pieces express conceptual and literal points of view typical of 1970s performance art and video installation, indicative of a time informed by the rise of systems based, non-verbal, visual communications and fractured, yet multiple, states of consciousness. These tendencies, apparent in this moment within Graham’s career, are an important precursor to the accelerated, multiple perspectives that mark contemporary experience.

Dan Graham: Beyond is on view at the Whitney Museum until October 11, 2009.