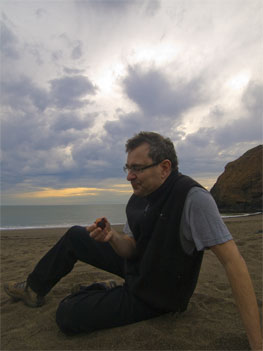 Erik Adigard is a communication designer whose work stretches into domains as broad as identity systems, web sites, videos, visual essays, and book design, as well as documentary films and installations in art museums and exhibitions. With distillations of trends and ideas into visually arresting spreads and iconography, Adigard and his M.A.D. company partner Patricia McShane's work was a key element establishing Wired magazine's visual storytelling from its start in 1993. This last decade has seen Adigard nearly as involved in installations and art venues as he is with his admittedly broad design practice.

Adigard’s most recent public work was AirXY, for the 2008 Architecture Biennale in Venice, created with M.A.D. and Chris Salter. A multimedia installation with interactive animation, sensors, haze, light, and sound, AirXY explored space, architecture, media, and the human presence, extended by sensors and transformed by interfaces and networks. Its manifesto described the “de facto landscape of screens” and disembodied living and called for “re-materialization” that would unite “data and bodies.” It followed Dualterm, in which Adigard and Salter used a Toronto Airport Terminal as a mixed point of departure into a SecondLife 3D world, along with other, less virtual destinations.

Friends and sometime collaborators, we sat down in a San Francisco Mexican restaurant--in the midst of a blaring and lengthy Michael Jackson tribute--to talk about how his approach changes when working in the different modes of art and design. -John Alderman

That's an ongoing, essential question: Am I moving toward the wide open horizon of art practice that is more introspective, or am I going toward the chaos and the confusing world of design, which is all about combining my skills and understanding of the state of things to develop solutions, to bring someone else's idea, or service, or whatever it is into the marketplace?

How do you answer that?

If I simplify the question and ask myself what is the difference today in my life between these two practices, I would say research is really the reason why I like to do design. I like to learn and understand how things work, and I think that the aspect of research that goes into design is the same as that which goes into arts. All of my work in the arts has been site or context specific. That's why I always have to do research about the context itself, to create a poetic or philosophical scenario that is going to survive in that context. You can't really expect anything to survive if you don't understand the context yourself. So I think that aspect of the research is the same, whatever it's for. Whether you have high aspirations or whatever, you are doing it for the money, so it's a completely objective and analytical, kind of like a data-crunching process.

Then there's another aspect that steps in which is the more subjective, creative and poetic dimension, and in my practice I've always allowed it to be as vivid, and as free, and as current as possible, so in that sense, this aspiration that I have for design corresponds with what artists normally do. I think that artists try to be true to themselves and true to their times in order to be relevant. In that sense there is a similarity, so these two aspects in my mind are more or less the same.

But there is a third factor to take into account: this is the process, and the process is actually quite different. Beyond the research and the notion of expression and freedom of creation, which we all have. Anybody can take a logo design and go crazy with it, it doesn't mean it's going to fly or will be used. If you are doing design, the process not only needs to take account of your clients, but your users as well. That’s very, very important. This is why we are doing what we are doing: we're doing it for the users.

Then there is this wake-up call to design which is: OK now that I've done my research, now that I've had my gut feeling, how am I going to throw it onto the canvas, on the table, on the product, how am I going to bring the product to life and how is it going to sell? In the arts, the only filter or stop sign that you have is maybe with your team or with curators. After that what you have is critique, but the problem is that by then you already have done your thing. And there is a fundamental difference there, so the notion of gambling is on your lap.

So it's about risk and freedom?

If we talk about freedom of the artist - I can do whatever I want with my challenges. But if we look at the world in which we live and look at the place of fine art and the role of the science and technology, there's been a shift.

One of the fundamental aspects to answer the question is to consider that the role of art in society has changed in this last century. Since, say, the high point of the Renaissance and the High Middle Ages, and the 19th century with Impressionism, it's basically the rise of the artist and the demise of the art being defined as craft, which in my book it is not. So, if I think that I would want to be a sculptor in the Middle Ages, rather than, say, a poet or philosopher, today I would have to be a designer. And then the challenge in this day and age in order to do sublime things as a designer is to hope that you have a visionary client like Apple, who can conceive of their venture as an artistic adventure in a sense. In that vein, I'm very proud of the work I did for IBM and some of the stuff I did with Wired.

And without that client?

If you don't have that client sometimes you work with a curator to come up with that expression that you believe is right for your time. It is really an expression that you would hope to see manifested in everyday life through the function of everyday life, but if you can't make it happen like that you make it happen in a museum or a biennial, and that's what I've been doing. After my work with Wired, I started to open up to museums and curators. Before then I was so thrilled and so fired up by what I was doing that I considered myself to be going completely in the fast lane of culture.

So without visionary design patronage, the remaining option is to become an artist?

I don't claim to be an artist. I use artistic processes, and I have an art education. If I only look at art that I see in Rhizome, SFMOMA, MOMA, Palais de Tokyo, Centre Pompidou, PS1, a lot of it is absolutely, absolutely sublime. People really spend the time to mature what they are doing. For the project that we did in Venice, I asked myself, "Am I ready to lose my house for it?"

So it was all or nothing?

It was not designed to be a specific answer to a specific question. It was an open-ended address of one challenge, and I considered that it was my duty to remove everything else from the table and get as far as I could with it. It was technology-based and it was design-related. A lot of the work I do is not intended to be art, it's intended to explore technology. It's intended to explore at what point design, technology, and general culture can levitate into something else. I don't claim it to be an artistic object, I want it to be an exploration that goes in the right direction. To me the challenge is to go right to the edge. If it were to go right over the edge and become fine art, that would be great, but it's not what I do.

So if you use artistic processes and have an art education, why would you not be an artist?

I do not consider myself a virtuoso designer. If I were, I certainly wouldn't go into the arts the way I do. Because I think when you are a virtuoso designer you basically find the sublime in your everyday practice, and because of that you get the respect to do your job. If you're a virtuoso violin player, the same thing. In my field you don't find virtuoso communicators, you don't even know them because nobody lets them mature, and I think really talented communication designers end up moving into the arts or marketing, because the industry doesn't give much space for both in design. I came out of the Beaux Arts, and I realized it when I was a student, and I realized that the ceiling was lower in the art school than the other schools where I went before. It's very much dealing with the level of your skill. You can invent any aspiration as an artist; as a designer you can't. When an aircraft is not done well it will crash, when you are an architect a building will crash. When you are a communication designer and you don't do your job well you're going to have a bankruptcy or a war between nations. And this is honestly why I am more interested in the challenge of design.

I can't say that I understood every thing you were saying here, but even the confusing parts were intriguing and thoughtful, pertinent to the times we live in.

It's interesting to note that during The Renaissance, what is generally regarded as one of the highest points in time for art and culture… the beauty, vision and content of a piece were inseparable from the skill and craftsmanship that gave it heft. Also there was no distinguishing between fine and commercial art.

I appreciate the dialogue you are opening up here. I speak as an painter/designer/communicator who increasingly finds my most important offerings are grounded in all three… and occasionally transcend to something else.

It could be argued that our new digital age provides the platform for a new renaissance and way of thinking that could augment an explosive change for the way we think about art in the next millennium. I think it does. We just need to wrap our arms around it.