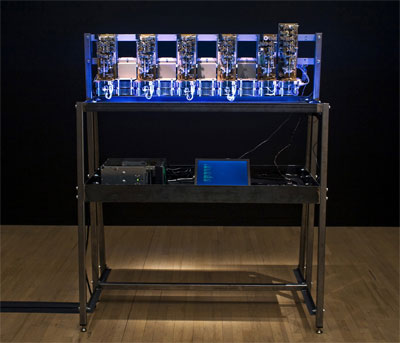 Telephone Trottoire is a publishing system for communities to share news, stories, and opinions over the mobile phone. The system dials members of the Congolese community and plays them a recording in the Lingala language. The recording might be a story, song, or joke, or it could be a discussion of a serious issue. The recipient of the call has the option of leaving a comment in response or forwarding the call to someone else, allowing the system to grow virally. It was developed on behalf of Congolese communities in London by MediaShed, a 'free-media' organization based in Southend-on-Sea, England.

At 01SJ 2008, three artists Graham Harwood, Richard Wright and Matsuko Yokokoji (formerly Mongrel ) presented Tantalum Memorial, an art installation based on Telephone Trottoire. This same installation will be on view at the art and digital culture festival transmediale in Berlin this week. Tantalum Memorial is one of eight projects to win the transmediale 2009 Award. I met up with Harwood at a Peet's Coffee in San Jose last June to discuss these two projects. He wore a hat with the word 'ADDICT' emblazoned across the front (his son's) and ordered an herbal tea. - Michael Connor

Well, it's pavement radio - it's the idea of standing on the street corner and then giving news to people as they pass by.

How do you use this idea in Telephone Trottoire? Is it a kind of broadcast through the telephone?

No... It allows, yeah maybe it does kind of broadcast through the telephone. But it also enables people to comment. See, there’s no culture of freedom of speech in the Congolese community. So the idea for them of just exposing themselves and their ideas or their thoughts in a kind of public way wouldn't be appropriate to them.

And so the telephony system allows them to have conversations that they couldn't otherwise, because as a group of asylum seekers, that's their main method of being in touch with each other - the mobile phone. And they normally have two or three each.

So have you found that it has encouraged free speech?

Yeah, I mean the statistics on it are amazing, during the first three days it was running there were over 80 comments on it.

Can you give me an example of one of the stories you might find on Telephone Trottoire?

Well, there might be something about childhood witches, or about how --

Yeah, childhood witches. You know, about why it might be wrong to think about your kid as a witch just because they're misbehaving in a certain way.

Can I look online and see the stories?

And so they say to us, "Well, you know, it would be great to develop a media system that can do this, because that's what we think we need." And then we're able to think about that on a systems level. That's the most important thing.

We're not trying to represent the Congolese in any way, shape or form. That's why they're not present in the gallery installation.

How long has Telephone Trottoire been running?

The first time it ran, it ran for about, I think, six weeks. It went from a database of 30 telephones to 500. And, of course, the network grew right round Africa and back up to London. It was really successful as a project, and we thought, great, we can turn this into a social project, and we can raise money on it, and the Congolese will be happy because they'll actually get paid, because they only got like 2000 pounds for running the whole Congolese culture thing for three years, you know, something really stupid. So we thought after the first time we'd be able to turn it into that kind of project. But the more and more we tried, we couldn't find funds for it, outside of the art scene. So we ended up thinking, "oh ok, we'll do it as an art project again. But this time what we'll do is we'll find a way to represent that within an art space as well."

And that representation was Tantalum Memorial?

We'd been working with this social telephony system for ages, and no one really knows that's what we've been doing, because they're all private systems.

What we wanted to do was to get people to think about levels of complication within media ecology. I mean, the Congolese use the mobile phones to keep in contact with each other, but they are also dispersed by them - because of the coltan wars.

What are the coltan wars?

The coltan wars start in about '98, and basically they’re wars to control the supply of coltan, of which 90\% comes from the Congo. 4.5 million people have been killed in order to try and control the coltan.

Coltan is the ore that's then refined into tantalum, and tantalum is in every one of these devices [holding up his mobile phone], you know, every mobile phone and computer.

So the Congolese people are forced to leave home because of the coltan wars, but they use the mobile phone to stay connected to each other.

So the piece that's shown in the gallery, Tantalum Memorial...

What is the Strowger Switch?

The Strowger switch is invented, in 1888 I think, by Alan Strowger. He's an undertaker, and the wife of his main competitor runs the telephone exchange.

This is a time before dials, and so you ring up, and you say, "someone's died, can you give me an undertaker?” And, of course, [the wife of the other undertaker] puts everyone through to her husband, rather than Alan Strowger. Alan Strowger gets really fed up with this, so he takes six months off of undertaking, and designs the Strowger Switch, which enables people to do direct dialing for the first time. So it's the forerunner really of most contemporary networking, because it automatically puts one person in touch with another.

And after about six years, Strowger goes back to being an undertaker again.

This is the device that was replaced by tantalum?

When the coltan wars begin, it marks the end of the Strowger Switch.

And what's interesting about the Strowger Switch as well is, it's very difficult to monitor. Because it's analog, it just passes voltage. So trying to track what numbers people are calling is very difficult.

And also, as we were researching, we would meet people who would work big banks of these things, and how they understood them, they would listen, and they would debug them with their ear. So there was a really different relationship, if you wanted to find one that wasn't working, you had to listen. We met all these people that were completely deaf from working in these big switching centers.

Where are these switches from?

The Strowger Switches [at 01SJ were] from Western Electric, which was founded on what Strowger did. 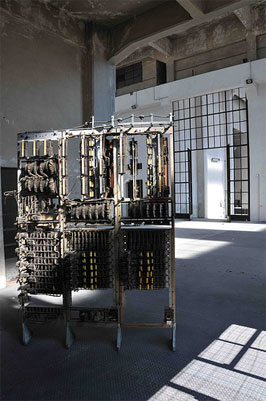 The device in the gallery is a memorial to the coltan wars, but is it also functional? Does it serve a function for Telephone Trottoire?

No. All it does is, every time there is a connection between Congolese people in London, it taps out the last six digits of that number, and then tells you what's happening. So it's basically mirroring the system in London, but all it's doing is tapping out that there's a connection made. It's a kind of echo of the past, and I suppose there is a memorializing aspect to it. And also there's the issue of not representing the Congolese.

Michael Connor is a writer and curator based in New York. He is currently developing a permanent exhibition about the history of the moving image in all its forms to open at ACMI in Melbourne, Australia in 2009. His exhibition 'The New Normal' is currently touring through Independent Curators International.

Connor lived in the UK for five years, where he worked as Head of Exhibitions at BFI Southbank in London, where he developed an interactive moving image archive and a new gallery dedicated to artists' film, video, and new media. From 2002 to 2005, Connor worked as a curator at FACT in Liverpool.